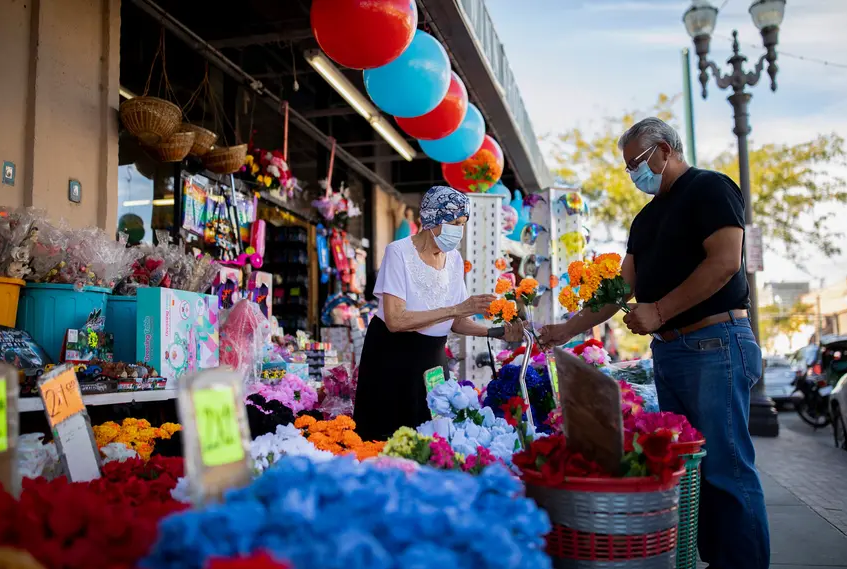 Before the pandemic led to closing the U.S.-Mexico border to tourists, New World by Juan’s — a household goods store only a stone’s throw away from the international bridge that connects El Paso to Ciudad Juárez — employed seven people. Today it’s down to three.

And when COVID-19 cases surged again last summer, the owner closed one of his three El Paso stores, which employed six people.

With last week’s announcement by the Biden administration that it will reopen land borders to all vaccinated travelers beginning Nov. 8, business owners who have been losing money and employees who are eager to go back to work full time are counting down the days until they can welcome their biggest spenders: Mexican tourists.

“We’re happy because the people from Juárez are coming back,” said Miguel Resendez, the manager of New World by Juan’s. He said the bridges reopening just in time for holiday shopping season will be welcome relief for border businesses.

In the same announcement, the federal government said that starting in January, people traveling for essential purposes — such as students, commercial drivers, U.S. citizens and health care workers — will have to start showing proof of vaccination at land crossings to enter the U.S. as well.

In March 2020, in an effort to fight the spread of COVID-19, the Trump administration closed the land borders to all but those “essential” travelers. From Brownsville to El Paso, pedestrian crossings at ports of entry dropped drastically, according to the U.S. Transportation Department statistics.

That was crushing for businesses that depend on Mexican tourists. Some shuttered for good, some temporarily closed and others cut their hours to stave off the losses. Resendez said at the store he manages, sales plummeted by 75%.

Jon Barela, CEO of the Borderplex Alliance, an economic development organization based in El Paso, said Mexican nationals make up 15% to 30% of retail customers in El Paso. The end of restrictions on Nov. 8 should reinvigorate the area’s economy, he said.

“This decision will help boost our regional and national economies and help return our inextricably linked community to some degree of normalcy,” he said.

The 42-year-old cashier works at a store that sells home goods and clothing near the bridge in downtown El Paso. She said when the pandemic hit, the store began closing early because of fewer customers, which reduced her paycheck.

“Naturally, I was worried that I wasn’t going to have a job,” she said. “But thank God I still have one, even if it means my hours had to be cut.”

Sandrano said the pandemic also hurt Mexico’s economy, so she’s not sure how long it will take before Juárez residents’ cross-border spending returns to where it was before COVID. “This will pick up gradually,” she said.

Whenever shoppers come, Guadalupe Jimenez will be ready. During a recent weekday, Jimenez, wearing a black face mask, greeted customers at a women’s clothing store near the bridge and helped two women look for a blouse. Jimenez said she was out of a job for six months last year when her boss closed the store because of lack of customers.

Her husband is retired and they were able to survive on his Social Security check, she said.

“There’s bills to pay, so it’s good [that restrictions are ending] because our business comes from Juárez,” she said.

At the other end of the border in Brownsville, Chander Buxani has owned a downtown jewelry store for 40 years and said he had to lay off employees because there were fewer customers coming from Mexico and sales dropped 60%.

Before the pandemic, he had a dozen employees working for him; now he has three. Like other business owners, he’s looking forward to the bridge reopening.

“I hope to get back to normal business and start hiring employees,” Buxani said.

This article was originally posted on After months of store closures and layoffs, border businesses eager to welcome back Mexican customers Nov. 8