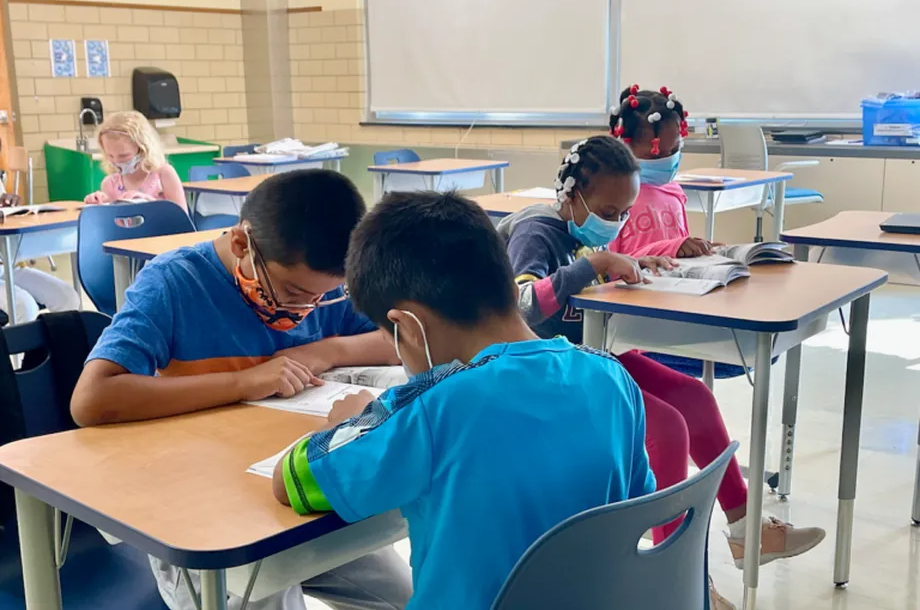 With a potentially trying winter ahead, Pennsylvania school officials are touting the early success of school reopenings.

This fall, many districts across the state — including in Philadelphia — offered five days a week of in-person instruction for the first time since the pandemic began. So far, there’s been no decipherable uptick in cases or hospitalizations.

“We wanna stay the course to offer a full-week of in-person instruction for all our students,” said Pennsylvania Secretary of Education Noe Ortega on Tuesday while touring West Philadelphia’s Lamberton Elementary. “That’s the north star.”

In Philadelphia, district schools fully reopened for in-person learning in late August. Since then, COVID cases and hospitalizations in the city have trended slightly downward. Though the district’s case dashboard has come under fire for having incomplete data, the trend lines are encouraging. Each week, between 0.4% and 1.2% of tests come back positive.

Across Pennsylvania, hospitalizations of pediatric patients with confirmed COVID cases started to trend up in mid-summer and rose until late September, according to the CDC. But over the last month-and-half, they’ve fallen again — and overall they’ve remained relatively low throughout the pandemic.

“We feel like that’s a result of the strong mitigation strategies that are in place,” Hite said Tuesday.

Those strategies, however, remain the source of debate.

Pennsylvania’s acting secretary of health imposed a statewide masking mandate for all K-12 schools and childcare centers in early September.

Last week, a lower court overturned the order, saying it was beyond the bounds of the state’s disease control law. The administration of Democratic Gov. Tom Wolf immediately appealed the decision, keeping the mandate in place for now. Wolf has already indicated that he will lift the order on January 17.

Hite said that the School District of Philadelphia will keep its mask mandate in place until CDC and Philadelphia Department of Public Health (PDPH) guidance changes, regardless of whether the state’s mandate lifts.

Philadelphia also has its own indoor mask mandate. A spokesperson for PDPH said there are “no plans” to remove it.

Hite said the district is trying to expand another mitigation technique — regular testing — but doesn’t have the capacity to do so.

Right now, the district says it tests most staff once a week and tests unvaccinated staff twice a week. There’s no regular testing for students, except for those who participate in certain extracurriculars like athletics and choir.

Amid a nursing shortage, the district is trying to hire contract nurses to fill in the gaps.

In Philadelphia and elsewhere, schools are scrambling for workers. That’s put intense pressure on the remaining school staff, who are responsible for getting students back up to speed and enforcing COVID protocols.

Ortega said the department is concerned about worker shortages and looking at a “number of solutions,” including more emergency permits for staff.