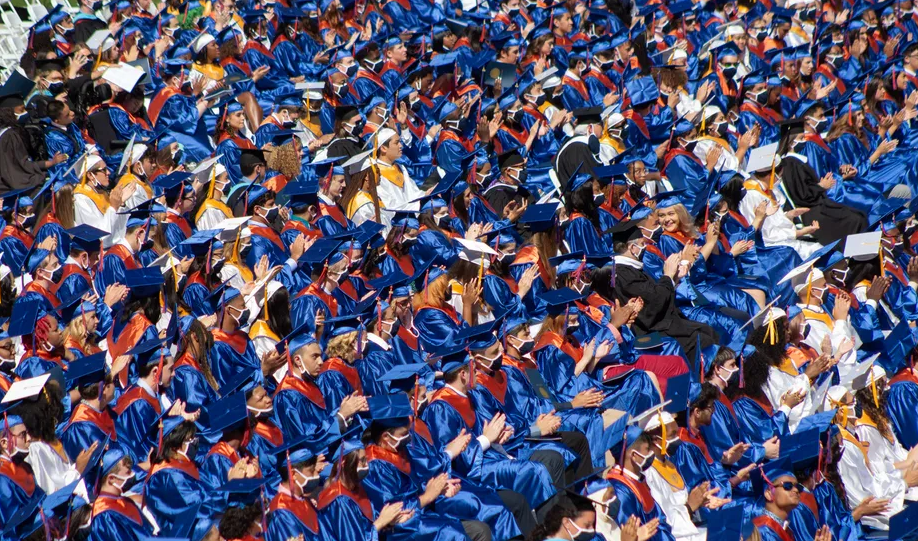 Despite the pandemic’s disruption, Chicago high school students graduated at a record high rate for the second year in a row this past spring, with upticks for students of all races.

Overall, 83.8% of students graduated in five years in 2021, compared with a rate of 82.5% last year, the district said Thursday. That increase comes after a year of largely remote learning, marked by increases in failing grades and drops in attendance, especially for students of color.

The district also touted its lowest-ever dropout rate of just below 4%.

“I have no doubt we will be the best district in the country because of the momentum we are seeing,” CEO Pedro Martinez said at an event at Amundsen High School on the city’s North Side. “Students, it’s because of you.”

The growth in graduation rates over the past decade has been a point of pride for district officials. As recently as 2010, the overall rate was about 55%, and the district has made marked progress in narrowing racial and gender disparities in graduation.

However, even as Black and Latino students have gained on their peers in recent years, those disparities have remained a stubborn reality. At 92.3%, the graduation rate for Asian American students, the highest in the district, remained more than 12 percentage points higher than that for their Black peers. White students, with a 2.1 percentage point increase, outpaced growth compared to other student groups.

Graduation rates continued to lag behind for students with disabilities (at about 71%) and for English language learners (roughly 75%).

Elaine Allensworth, the head of the University of Chicago’s Consortium on School Research, said that it’s not entirely surprising to see the graduation rate increase on the heels of massive pandemic upheaval. The consortium’s nationally recognized work has shown that the transition to high school and students’ experiences in their freshman and sophomore years are crucial to their odds for graduating.

“It does seem counterintuitive,” she said. “But high school graduation is something that happens over four years, and it’s really set in place during students’ freshman year.”

Allensworth noted the number of courses Chicago high school students take and that their grades hit an all-time high on the eve of the pandemic in fall 2019, allowing the district to absorb some of the fallout from the outbreak.

Last year’s five-year rate — a record at the time — was held up by district leaders as evidence of students’ resilience despite the abrupt shift to remote learning that spring and other pressures from the pandemic. The district’s graduation rate was 80.9% in 2019.

That spring of 2020, educators had reported scaling back their curriculums and reducing the number of assignments to help students struggling with that shift. But officials dismissed the idea that the graduation rate increases had anything to do with efforts by teachers and schools to give students grace amid the pandemic by passing them more easily, saying that campuses had stayed the course on holding students accountable.

At the time, the district also posted a record high on-time graduation rate, with just more than 80% of students graduating in four years in 2020.

Last year, the district changed how it calculated rates in what officials said was a bid to better account for freshmen who drop out but eventually re-enroll and for students with disabilities who finish school at age 22.

The district provided graduation data for some high schools but did not break down for all racial and gender groups Thursday. A Chalkbeat analysis found earlier this year that attendance dips and increases in failing grades were most marked for Black and Latino boys during the 2020-21 school year. In high school math, for instance, 11% of grades both of these student groups got in the year’s final quarter were Fs, opening up a 5 percentage point gap with Latinas and 4 percentage points with Black girls.

In the latest graduation data, more than 13 percentage points separated the rates for Black girls and Black boys.

Kailey Garcia, an Amundsen senior who spoke at the Thursday event, commended district efforts to ease the transition into high school and foster relationships with students, such as the Freshman Connection summer orientation program and a similar program for sophomores the district launched this past summer.

“These programs solidified my relationships with my school and with my peers,” she said.

Allensworth, the consortium researcher, noted that increases in failing grades were concentrated in some Chicago high school campuses and were overall more pronounced at the elementary and middle school level.

She said she will be watching what happens to the district’s graduation rates as last year’s freshmen and sophomores — whose all-important high school transitions were disrupted by the pandemic — make their way up the grades. She said she worries about this group of students, particularly given the social-emotional and mental health toll of the past year-and-a-half.

What happens in school buildings in the coming months as educators and students navigate the return to full-time in-person learning could avert a graduation drop, Allensworth said.

“Any time you have a big transition,” she said, “how you handle that transition matters a lot.”