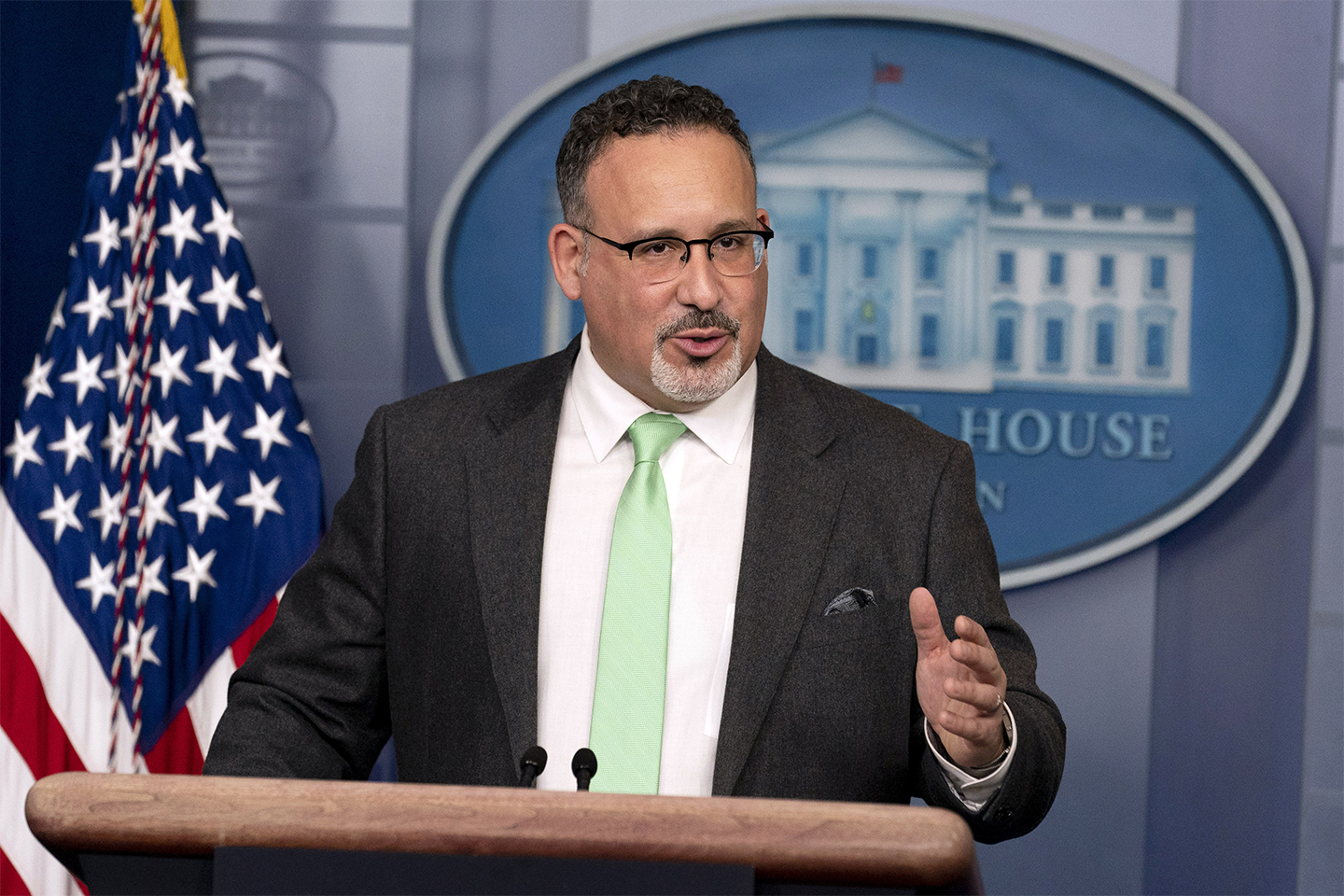 Republicans declared victory after the U.S. Department of Education released new information appearing to walk back previous language that encouraged schools to teach critical race theory and gave preferential treatment when awarding grants if they did so.

Secretary of Education Miguel Cardona posted to the Department of Education’s official blog to announce the change after major pushback.

“The goal of this program is to improve the quality of American history, civics, and government education in order to provide more students the opportunity to learn about the rich history of our nation and build the skills needed to fully participate in civic life,” Cardona said. “This program, however, has not, does not, and will not dictate or recommend specific curriculum be introduced or taught in classrooms. Those decisions are – and will continue to be – made at the local level.”

Controversy erupted after the Biden administration proposed a new Department of Education rule in April that changed how grants are awarded. The change meant schools received preference in grant consideration if they included in their curriculum information from the “1619 Project,” a controversial long-form journalism project by the New York Times that was widely regarded as the popularizing vehicle for critical race theory ideas.

Critical race theory proponents argue that “the law and legal institutions in the United States are inherently racist insofar as they function to create and maintain social, economic, and political inequalities between whites and nonwhites, especially African Americans,” according to Britannica.

The Department of Education specifically cited the “1619 Project” in the rule proposal. The New York Times published the 1619 project in 2019, which is so named because it says the U.S. was not founded in 1776 with the Declaration of Independence, but in 1619 with the introduction of enslaved Africans to the colonies. Historians and many on the right have been highly critical of the project.

“The goal of The 1619 Project is to reframe American history by considering what it would mean to regard 1619 as our nation’s birth year,” the New York Times said.

The 1619 project promoted a teaching central to critical race theory, the idea that protecting slavery and racism was a driving motivation for the American revolution. The New York Times later walked back that claim.

The proposed DOE rule received more than 35,000 public comments, far more than average, with the majority criticizing the promotion of the controversial school of thought. That grassroots mobilization and Republican pushback led Cardona to walk back the racial language.

In response to the proposed DOE rule, 20 governors from around the nation sent a letter to Cardona in May.

“Accordingly, the Department should not adopt the proposed rule or, at a minimum, should make clear that grants may not fund projects that are based on CRT, including any projects that characterize the United States as irredeemably racist or founded on principles of racism (as opposed to principles of equality) or that purport to ascribe character traits, values, privileges, status, or beliefs, or that assign fault, blame, or bias, to a particular race or to an individual because of his or her race,” the letter says.

Indiana Attorney General Todd Rokita, who helped lead the effort against the rule, celebrated the change but went on to warn that critical race theory proponents could still promote the school of thought under a different name.

“Even as we celebrate this victory, however, we must stay watchful,” Rokita said. “Bureaucrats in Washington could very well stop using the term ‘critical race theory’ while continuing to fund programs that veer into bigotry, divisiveness and indoctrination aimed at discrediting American institutions and the beauty of our Constitution. We will continue working to preserve the qualities that make our republic a shining city on a hill.”

The debate over critical race theory has pervaded state and local governments and galvanized conservative opposition.

State Rep. Danny Crawford, R-Ala., introduced legislation to have teachers fired if they teach “certain concepts regarding race or sex, such as critical race theory.”

“This bill would also require public K-12 schools and public institutions of higher education to terminate the employment of any employees who violate its provisions,” a synopsis of Crawford’s bill says.

Similar anti-critical race theory laws have popped up around the nation. At the federal level, though, Cardona appears to have walked back the requirement, though no official DOE rule has been published to reflect that change.

“The only thing more troubling than Critical Race Theory in public schools is Miguel Cardona mandating that it be there,” said Sen. Mike Lee, R-Utah. “These decisions should be handled by states and communities, not the federal government. I’m glad to see Sec. Cardona U-turn.”