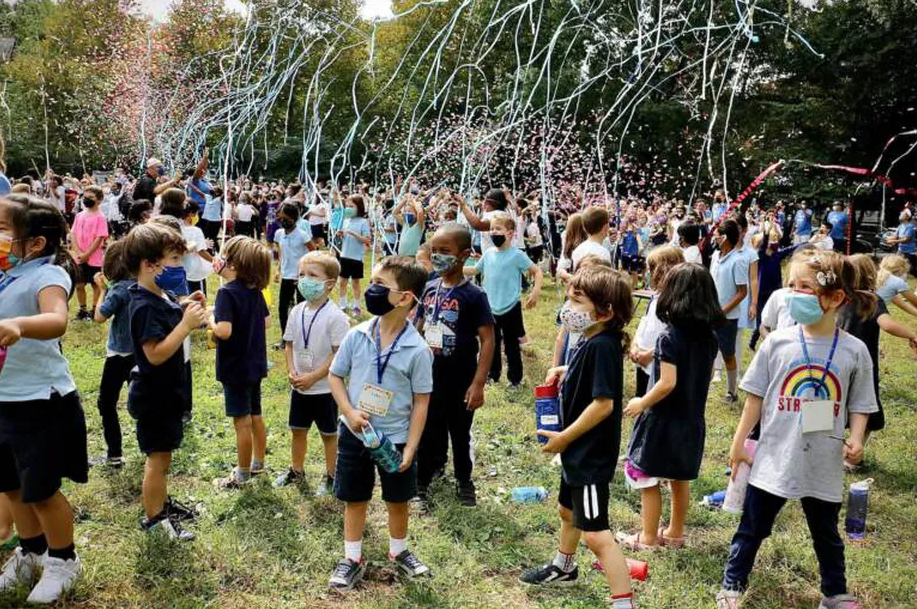 National Blue Ribbon Schools are recognized annually by the education department for overall high academic performance or for helping underserved groups make more progress. The two schools are among seven in the region, 13 in Pennsylvania and 325 nationally to win the honor this year.

The honor was celebrated at both schools with a visit from Superintendent William Hite and other dignitaries, including Mayor Jim Kenney, who spoke at Penn Alexander.

“To see two of our schools being recognized for their accomplishments during a year that was challenging should be a point of pride for our principals, teachers and students,” Hite said.

The schools were given the honor based on test scores from the 2018-19 school year because no state assessments were administered during the last school year with the disruption of the pandemic. Schools are nominated by state education officials, and school officials complete lengthy application forms, which request information on myriad topics including community engagement and extracurricular activities.

GAMP, founded 50 years ago in South Philadelphia to offer arts programming, was recognized for overall high achievement. It is a special admissions school that enrolls just over 600 students in grades 5-12.

“The truth of the matter is that this school was getting awards before I came,” said GAMP Principal Jovan Moore, who is starting her fourth year leading the school. Moore came to GAMP after teaching high school biology and environmental science, but she is also a dancer.

“Having a performance background, and coming to a school with such an awesome reputation, and it becoming more successful, is a huge testament to the staff being willing to trust me, students trusting me to lead them, and to the community itself,” she said.

Moore said that leading the school through COVID has been a challenge. At GAMP, all students sing, and they put on a musical every year; last year, it was a virtual cabaret. “I walk up and down the hallways singing, whether it sounds good or not,” she said.

The school has taken extra steps to assure parents that it is safe, even while students perform. All the high school students are tested for the coronavirus twice a week, and Moore hopes that will soon be extended to the younger students as well. All students are masked while singing.

Lauren Overton is in her second year as principal of Penn Alexander, which officially is called the Sadie Tanner Mossell Alexander University of Pennsylvania Partnership School. It is a K-8 school with an enrollment of about 600, and it gets extra resources from Penn.

This is the second time Penn Alexander has won Blue Ribbon honors; the first time was in 2016. It was recognized for helping traditionally underserved students make more progress.

This is the second school to get Blue Ribbon designation while Overton was principal. She was  in her second year leading Meredith Elementary when it received the honor in 2018.

Both schools are considered among the district’s more privileged, with more racial and ethnic diversity and less poverty than the typical city public school. More than 40% of the students are white, followed by 21% Asian American, 19% Black, 11% multiracial and less than 5% Latino. The school district is predominantly Black and Latino.

Overton said Penn Alexander still has challenges, with 43% of its students considered low-income. One in 10 students is an English language learner, and 23 languages are spoken in the school. During the COVID shutdown, she said, “we distributed meals to 100 families” and undertook a “massive” effort, with Penn’s help, to provide internet access to all families during virtual learning.

In such a diverse setting, “inequity is more apparent,” she said. “There’s always work that can be done in schools to improve the culture for students and adults. My commitment is to redesign schools to meet kids at the margins. I don’t think we’re there yet. My focus is to be able to walk away from a school and leave it better than when I found it.”

Since the National Blue Ribbon Schools program started in 1982, 14 district schools have been honored, several more than once. Others that have won the award twice are Central, Masterman, Franklin Learning Center, Carver High School of Engineering & Science, and Hill-Freedman. All those are high schools with selective admissions criteria. Penn Alexander is now the first elementary school to be named twice.

Among the elementary schools that have been recognized — Pollock, Rhawnhurst, Greenberg, Greenfield, McCall, Meredith, Conwell, and Overbrook Education Center, or OEC — all except OEC are more ethnically, racially and socioeconomically diverse than most city schools.