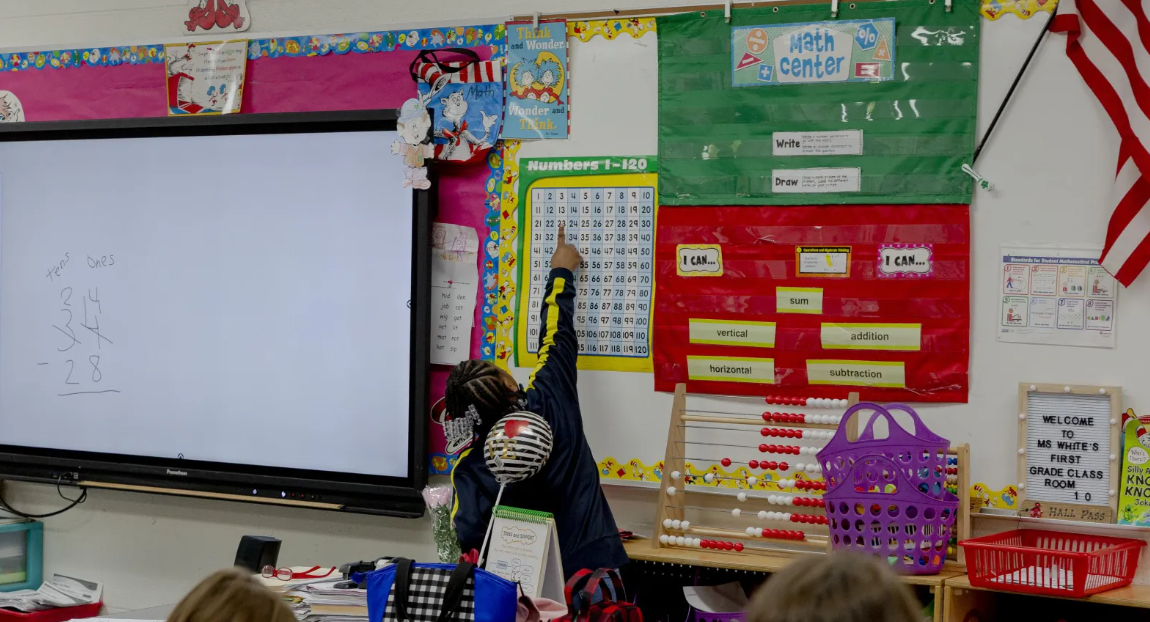 Math games, time with friends, and her mother. That’s how ShaeLynn Troutman, a seventh grader at East Arbor Charter Academy outside Ypsilanti, describes the reasons she stays after school twice a week for tutoring.

ShaeLynn’s grades fell during the pandemic as she — like many students across Michigan — struggled to engage with virtual lessons.

So her mother encouraged her to take advantage of the optional tutoring, paid for through federal COVID relief funds for education. She has had more fun than she expected, and now she says she’s well on her way to recovering that lost learning.

“Class is way easier” now thanks in part to tutoring, she said. “I come in knowing more. My GPA, like, skyrocketed.”

Well-developed tutoring programs represent a potential game-changer for ShaeLynn and students like her across Michigan who lost significant ground academically during the first year and a half of the pandemic. The need for recovery is especially great for students who spent much of last year learning online. These students are more likely to be people of color and come from economically disadvantaged families. Half of Black fourth graders began the 2020-21 school year significantly below grade level on state benchmark math exams. By the end of the year, two-thirds were significantly behind.

But the limited scope of the efforts now under way, and a lack of statewide coordination, may hamper Michigan’s recovery effort. Of the $6 billion in federal COVID relief money that Michigan has to spend on education, only a small sliver is going to tutoring programs. And of the 818 Michigan districts that had submitted COVID spending proposals in December, barely a quarter mentioned the word “tutor,” according to research by Chalkbeat Detroit, Bridge Michigan, and the Detroit Free Press.

While the effectiveness of tutoring has been well-documented by education researchers, those studies assume that the programs in question use the best practices.

“It is discouraging” that Michigan schools aren’t consistently following the guidance, said Kim Dadisman, senior policy and research manager at the Abdul Latif Jameel Poverty Action Lab, a Massachusetts-based research center that published a recent report on the power of tutoring for students from low-income families.

“It doesn’t mean no child will benefit,” Dadisman said, “but it just won’t be as effective.”

Here are some of the patterns reporters observed in the new Michigan tutoring programs they explored:

At East Arbor Academy, ShaeLynn’s school in Ypsilanti, Yanfei Clawson, a teacher for at-risk students, receives a stipend to stay after school twice a week and tutor small groups of students.

“I can see the moment when kids really click, and they really understand it more than they did before the tutoring program,” Clawson said.

But a lack of transportation keeps some students at the school from accessing tutoring.

East Arbor, like most charter schools, doesn’t provide bus transportation, and parents would have to change their schedules to pick their children up from after-school tutoring.

“Most of the kids who need it most … their parents opt out because of transportation,” Principal Tanesha Newby said.

Staffing woes related to the pandemic have also hampered new tutoring programs in Michigan and nationwide. A tight labor market has made recruiting difficult, while educators already working in districts are often too exhausted to take on additional work.

Ecorse Public Schools, an urban district that borders Detroit, proposed to spend $5 million in federal COVID-19 funds on its tutoring program, making it one of the largest in the state. The program is staffed by the districts’ teachers and paraprofessionals, who are paid to run 11 tutoring sessions per year under an agreement between the district and its unions.

The program at Ecorse’s Ralph J. Bunche Academy, a K-3 school, is popular. On a typical day, roughly 100 of the school’s 346 students stay after school for a hot meal in the cafeteria and an extra hour of instruction.

The benefits of the program are already apparent in the districts’ benchmark exam scores, which are showing the highest growth levels in four years, according to Principal Wendy Senkbeil.

On a recent Thursday, students were divided into classrooms by grade level. In one classroom, 18 third-graders were assigned to a single teacher, so Senkbeil stepped in as a tutor. The recommended group size for tutoring is one tutor to no more than four students, according to a report on the feasibility of sharply expanding tutoring services in American public schools.

Down the hall, a second grader wasn’t getting that extra help as she struggled to follow a read-aloud story about a pet turtle. Other students, aided by tutors, were underlining evidence that backed up the story’s main idea, but she didn’t pick up her pencil. There were 16 students in this classroom and only two adults, and neither of them was nearby to help.

She raised her hand to ask a question, but said she forgot what she’d had in mind. A few minutes later, she left the room for a bathroom break.

This student had struggled to follow months of virtual lessons and “didn’t learn anything” while taking classes from home, according to her mother, Ashley Reyna. Now she reads on a kindergarten level and is struggling in school.

“I’m not sure tutoring is doing anything,” Reyna said. “But I want to help her, I’m gonna keep trying.”

“If we had to do it over, we would have negotiated with the teachers to stay every week,” he said. “You live and learn in the first year of any program.”

In the Westwood Community School District, leaders have kept student-to-tutor ratios low in part by keeping the program small. Of the district’s 1,400 students, 70 academically struggling students receive tutoring at a time.

The students meet three days a week for one hour either before or after school, with three to four students for each teacher for nine weeks, said Melanie Depray Learst, director of curriculum, instruction, and accountability. Students who tested below their academic achievement targets were invited to attend tutoring.

The district is now in its second round of nine-week tutoring of 70 students, including 15 from the original group who elected to continue for this round. Teachers are seeing an increase in participation and proficiency in classroom activities and assessments, Learst said.

The school district will continue high-dosage tutoring in the fall after students complete assessments.

Behavioral issues are down, she said, “because they have a better sense of what’s going on and how to do the material, versus shutting down and getting frustrated.”