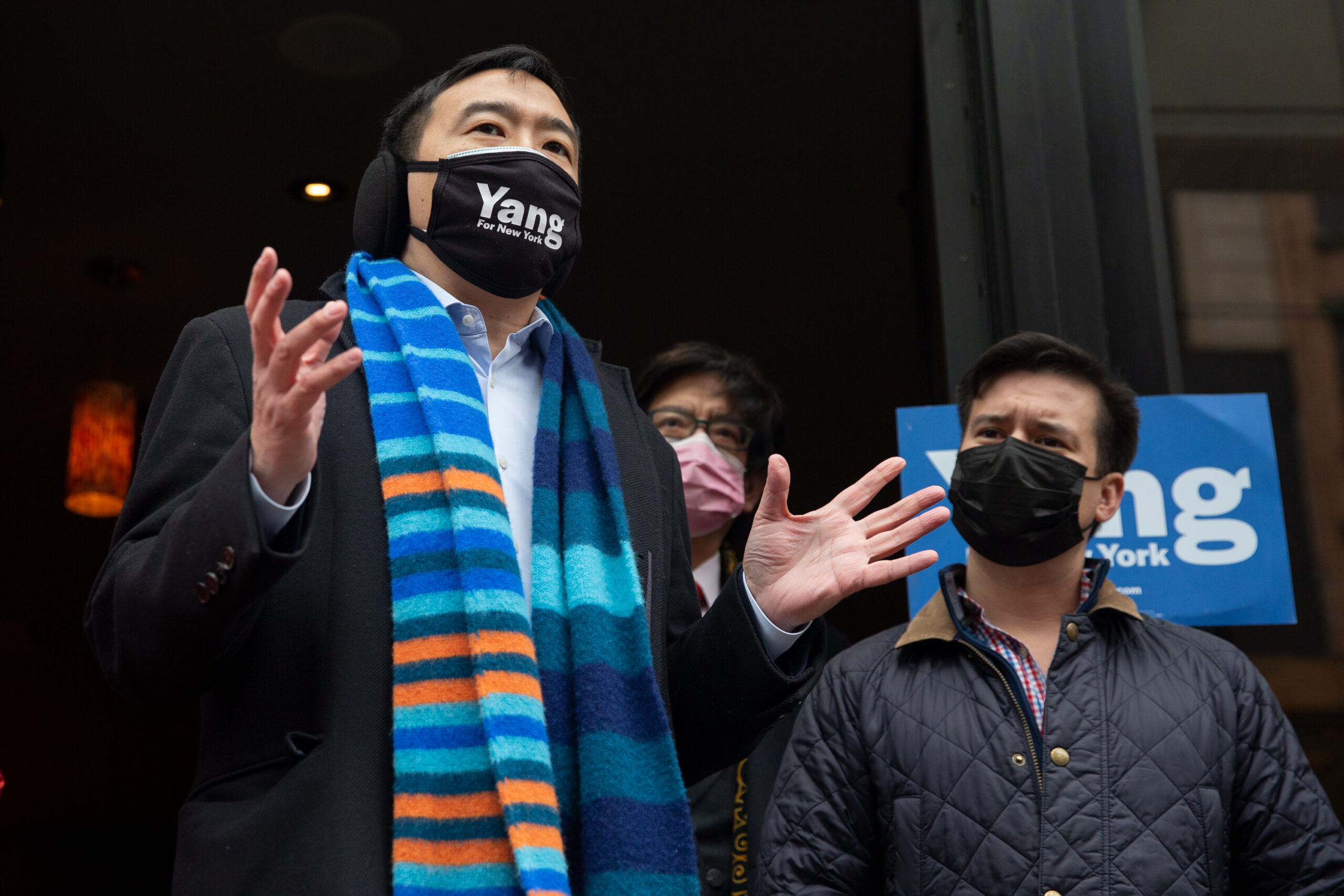 After eight years of scorn from Mayor Bill de Blasio, charter schools could see a friendlier face in City Hall if early frontrunner Andrew Yang stays ahead of the crowded field of Democrats running for mayor.

De Blasio has consistently foiled charter schools throughout his time in office, even leaving one high-profile charter school without a building and shouting at a 2020 presidential campaign stop that he “hates” them.

Yang’s view is different: He’s open to establishing more of them — and put big bucks into one Manhattan charter school.

Nonprofit records show Yang and his then-test-prep company donated a total of at least $110,500 to The Equity Project, which was founded on the idea that high-performing teachers should get paid more than administrators, back in 2008. The school’s website also lists Yang as donating $30,315, though his campaign didn’t clarify whether that amount included any portion of his 2008 contribution.

Yang is friends with the school’s founder, Zeke Vanderhoak, and hasn’t made “significant” donations to other charter schools, according to his campaign.

The Equity Project opened its Washington Heights middle school in September 2009, offering teachers a $125,000 salary — and bonuses if the entire school performs well. The Equity Project now has three sites, including one in Inwood.

The school’s impact on student success — a measure used to gauge school performance — placed it within the top 2% of the city’s middle schools in 2018.

“As a NYC public school parent, I’ve always been proud to support schools that pay their teachers well and have a record of producing great outcomes for kids in underserved communities,” Yang said in a statement.

Officials at the charter school didn’t respond to requests for comments.

Yang’s actions and recent statements on charters, which ranged from an embrace to clarifying that the public school system would be a bigger priority for him as mayor, marked his latest attempted balancing act as an outsider trying to upend a packed race.

Yang told THE CITY recently that he isn’t interested in using a school’s status as public or charter to determine how he’d govern on education.

He did, however, say that he’s open to increasing the number of charter schools allowed to operate in New York City. The city reached its state-allotted cap in 2019.

“My take on charters right now in terms of the allocation is that to the extent that there are charters that are allocated by the state that are not being used,” Yang said. “I think that we should look at reallocating them.”

New York State is allowed to grant charters for up to 460 privately run, nonprofit schools. Some 267 charter schools across the five boroughs currently educate 135,902 students — about 12% of the 1.1 million public school students in New York City’s public school system.

Some 94 remaining charters can be approved outside of the city — some of which, Yang suggests, New York City should seek to claim.

Yang’s stance is unusual in a city ruled by Democrats who often aren’t supportive of charter schools. During a crowded open primary race for the New York City mayoralty, it’s not lost on candidates that the United Federation of Teachers union still has not decided which contender will get its coveted endorsement.

A few minutes after Yang first spoke with THE CITY recently on the Staten Island Ferry, he returned to expand on his original statement on charter schools. This time, he emphasized that, as mayor, public schools would be his top priority.

“Our goal has to be to help improve the educational outcomes and environments for as many kids as possible,” said Yang, a public school parent. “So the focus of our mayor should be on our public school system because it just serves so many more of our kids.”

The UFT has started its endorsement process and is tentatively scheduled to hold a series of forums with top candidates in April.

The union currently backs several pieces of state-level legislation that would curtail public funds to charter schools and limit their growth.

One bill would bar charters from receiving public funds to pay for rent, a reversal from current state law requiring the city to foot the bill in many instances. Another would limit grade expansion to a charter’s existing school level. The UFT also backs a sweeping bill that would require greater financial transparency from charter schools.

The union is fine with the city cap as is.

“We must hold charter schools to a basic level of accountability for how they use taxpayer dollars, and we must keep the charter school cap in place and avoid bringing back ‘zombie charters,’” Alison Gendar, a UFT spokesperson.

Some of New York City’s most powerful unions –– which are crucial for the political campaign infrastructure and potential votes they provide –– have started picking sides.

And Brooklyn Borough President Eric Adams on Wednesday received an endorsement from the public employee union DC37, after securing the support of the politically active Hotel Trades Council.

Some of his other competitors have promised to rein in charter schools.

Dianne Morales, a nonprofit executive, declared in a February forum that New York City should have control over the charter school cap to curtail the presence of charter schools in the city.

A spokesperson for Stringer’s campaign, Tyrone Stevens, said he supports maintaining the cap as is and that the state should control the charter cap.

Adams said that any decisions regarding charter school caps should be made by the state Legislature.

Shaun Donovan, an ex-Secretary of the U.S. Department of Housing and Urban Development, has also argued that New York City should have control over the charter school cap. A spokesperson for his campaign said that he would consider advocating for more charter schools to be allowed in the city.

Ray McGuire, an ex-Citigroup executive, supports city control of the cap and a campaign spokesperson said that he’d “work to increase the number of charter schools allowed in NYC.”

Wiley’s campaign didn’t respond to a request for comment.

Yang is the frontrunner in the wide-open mayoral race after a March poll found him leading the crowded field with 32% of Democratic voters surveyed ranking him as their top choice.