Please ensure Javascript is enabled for purposes of website accessibility In America, I faced Islamophobia right from the start - Mid Year Media Review
Skip to content 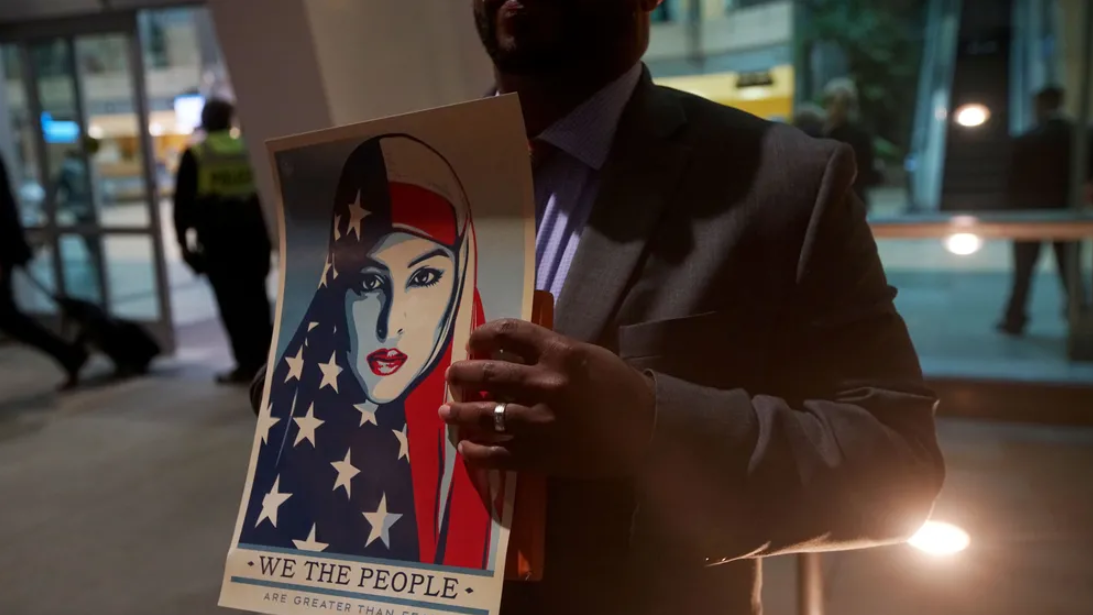 “Do you know you have to come back here because they are banning Muslims?” my uncle, calling from Bangladesh, told me, his voice scared. It was 2017, and he had just heard about President Trump’s executive order barring people from a group of Muslim-majority countries from entering the United States.

It was a terrifying thought, considering that it had taken my family 13 years to get U.S. immigrant visas, and we had only recently arrived in Philadelphia. According to my uncle who was watching the international news, we weren’t welcome here because of our religion. As it turned out, the executive order didn’t apply to us because Bangladesh — my mathribhumi, or motherland — was not one of the countries subject to the ban. But the call was unsettling because until then I hadn’t known that there was such a thing as Islamophobia. I never expected this kind of welcome to America.

My family dreamed of living in the United States. That dream and I were born the same year: 2003. This country represented a beacon of hope, freedom, and a new start. My parents wanted a better education for my siblings and me, and we wanted to be reunited with members of my mother’s family who were already in the U.S.

When our visas came through and we left Bangladesh, we thought we were answering the loud rapping of opportunity knocking. At the airport in Dhaka, the stifled sobs of my grandma, auntie, and uncle weighed down my steps across the gangplank. As the airplane took off, sweet memories of my former home and jumping rope in the schoolyard — places soon to be thousands of miles away — were flashing before me. That day while waiting on the plane, I wrote in my journal, “I feel numb. I don’t know how I will cope with the new culture, new people, new everything.”

I knew the transition would be challenging, especially since I spoke only a few words of English when I arrived. (Bengali is my mother tongue.) I just didn’t think my religion — and my hijab, or traditional Muslim headscarf — would be a factor. Where I came from, most people were Muslim, and many wore headscarves. My faith and clothing had never before called attention to themselves.

But when I started school in Philadelphia, they did. I walked through the halls on my first day, everyone stared. I seemed to be the only one wearing a hijab. Mine was covered in small pink flowers. I saw students in the hall, throwing menacing stares my way. Aiming to break the ice, I said “hey,” and introduced myself — using some of the few English words I knew. I sighed, thinking I did OK. Then someone giggled and pointed at my clothes, which was greeted with a supportive chuckle from her friends. Another boy mimicked my accent with exaggerated hand gestures, receiving roars of laughter from his friends. Someone shouted, “Look at her! What is that thing on her head?” Someone else tried to pull off my hijab. I felt stinging my eyes, but I bit my lip and said nothing.

When I got home from school and shared my bitter experience with my mother, she smiled. She took me to her shoulders. “Ma,” my mom said, using a Bengali term of endearment, “accept the beauty in differences. Don’t be cowed by the negativity of others. Just remember, what makes us different makes us beautiful.” My mother’s words were Dua for me.

The racist and Islamophobic teasing continued, but in time I met other students who were recent immigrants to America and also learning English. They came from Mexico, Morocco, Saudi Arabia, and elsewhere. A few other girls even wore hijabs. My ESL class was a place where I didn’t feel like I had to know the language and culture to fit in.

When I started high school the following year, I also met other friends who asked with interest, with maturity and not malice, about my faith. I told them about my beliefs, and also about the obstacles I’ve faced in America — about the so-called Muslim ban that coincided with our arrival, about the bullying I have endured, and about the hateful implications that Muslims are terrorists. (I didn’t even know what terrorism was before I came to the U.S.)

In America, I have sometimes felt sad, but I have never felt ashamed about my identity and culture. It’s what makes me unique and makes me stand out from the crowd. As my mom said on that difficult first day of school, it’s what makes me beautiful.

This article was originally posted on In America, I faced Islamophobia right from the start