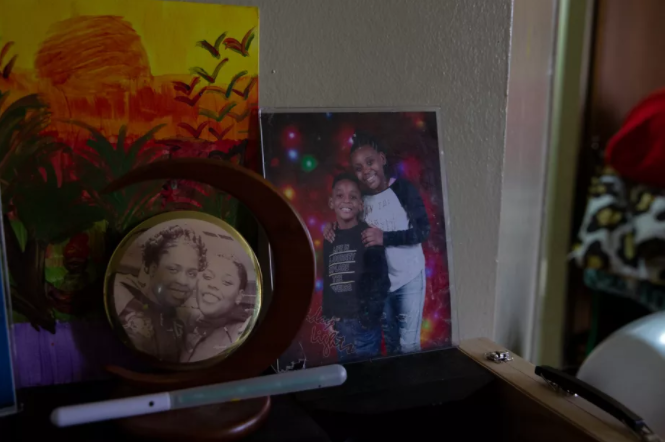 When public housing tenant Eleanore Bumpurs’ daughter and son tested positive for elevated levels of lead in their blood a few years ago, NYCHA managers assured her that the Forest Houses, the Bronx development she called home, was “lead free.”

“They told me, ‘We don’t use lead paint anymore,’” recalled Bumpurs, whose namesake great-grandmother was gunned down by cops in a 1980s shooting that shook the city.

“They tried to put this elsewhere,” she added. “They said children use jewelry that has lead.”

NYCHA moved her to another apartment in the Forest Houses, and her son registered an elevated blood-lead level again. But because officials considered the complex to be free of lead, they didn’t inspect either apartment.

Last week, Bumpurs learned the truth: NYCHA, responding to THE CITY’s report on her apartment woes, discovered lead paint in her bathroom.

Hers is one of over 24,000 apartments to test positive for the toxin since 2018. Inspections, meanwhile, are set for tens of thousands more units across the city.

Bumpurs, 32, lives in a development built in 1956 when lead paint was used universally and concerns about its damaging effect on the cognitive development of children were only beginning to surface. By the time Bumpurs moved into Forest Houses in 2010, NYCHA had deemed her entire development lead-free.

That’s because of a program overseen by the U.S. Department of Housing & Urban Development (HUD) that allowed public housing authorities across the country to declare entire buildings lead-free if a random sampling of apartments turned up only negative results.

That program granted housing authorities so-called HUD waivers, exempting hundreds of buildings from further inspection. Forest Houses and dozens of other NYCHA developments got the free passes around 2000.

The HUD waiver program has since come under question in New York after multiple supposedly lead-free NYCHA buildings were found to contain the substance.

Three were found to still contain lead, including one at Ingersoll Houses in Fort Greene, Brooklyn.

The Ingersoll tenant, who was raising her children there, recalled how NYCHA managers previously had refused to test her apartment for lead, saying it didn’t exist in the complex.

After the press and federal prosecutors uncovered that and other NYCHA failures in what Mayor Bill de Blasio once called NYCHA’s “rigorous” lead paint cleanup, City Hall ordered 134,000 apartments likely to contain lead paint inspected and, if necessary, cleaned of lead.

What Is NYCHA? Your Questions Answered About Public Housing

If the population of New York City Housing Authority residents were a state, it’d be as big as Wyoming, or Vermont. Figuring out how to repair the crumbling, enormous housing system has stymied leaders for decades as tenants suffer.

That effort began in 2018 and is ongoing. Recently NYCHA admitted its estimate of how many apartments where young children live likely contain lead was way off, upping the number from around 3,000 to 9,000.

After claiming only a handful of children living in NYCHA were lead poisoned, housing authority officials forced to admit that between 2012 and 2019, the actual number was more than 1,060.

As of last week, the mayor’s campaign to test tens of thousands of NYCHA apartments for lead was about halfway to the finish line, with 67,500 of the 134,000 inspected.

Of the 55,000 apartments where test results are in, 24,500 units have so far tested positive and have either been cleaned or are scheduled for cleaning.

One of those apartments is home to Eleanore Bumpurs.

A Legacy of Tragedy

Bumpurs is the great granddaughter of Eleanor Bumpurs, the 66-year-old woman who was shot dead by police inside her NYCHA apartment during a botched eviction attempt in 1984. That incident is considered one of the worst examples in the city’s history of police mishandling a response with a person experiencing a mental health crisis.

Like her great-grandmother, Eleanore Bumpurs, who spells her first name with an additional “e,” lives in a NYCHA apartment.

And like her grandmother, whose eviction was triggered by her non-payment of rent over a repair dispute, Eleanore Bumpurs has struggled to get NYCHA to address unhealthy and unsafe living conditions — including lead paint.

She moved into a Forest Houses one-bedroom apartment on Tinton Avenue in 2010. At the time, Bumpurs had one child, a 1-year-old daughter. Soon after, her daughter registered a blood-level of five micrograms per deciliter.

At the time, the level that triggered city health department intervention was 10 micrograms per deciliter. Two years later, however, the U.S. Centers for Disease Control & Prevention (CDC) changed its advisory to state any blood-lead level of 5 micrograms or higher required the health department to notify the landlord to inspect for lead and perform a thorough cleanup if necessary.

When she told NYCHA managers about her son’s elevated blood-lead levels and they told her the building was lead free, she said. Because she was now living in a one-bedroom unit with two children, she was granted a transfer to another Forest Houses building, where she moved into a two-bedroom apartment on Trinity Avenue.

About a year after her 2015 arrival, her son again registered a blood lead level of 7 micrograms per deciliter.

The dynamics of dysfunction at NYCHA took a significant turn in June 2018. After the press raised questions about NYCHA’s lead paint program, the Manhattan U.S. Attorney launched an investigation and discovered NYCHA managers had been lying about lead paint for years, falsely claiming to have performed all required inspections and cleanups.

A federal monitor was appointed in 2019 and began overseeing de Blasio’s new clean-up campaign. That effort arrived at Forest Houses in the last few weeks, with 696 of 1,311 apartments inspected for lead as of Feb. 11.

On Jan. 24, THE CITY reported on Bumpurs situation, including her collapsing bathroom floor, peeling paint and the elevated blood-lead level of her children. The next day, NYCHA sent workers to her apartment. They began fixing her collapsed floor and tested the apartment for lead paint.

Last week, a NYCHA vendor showed up and announced her apartment was scheduled for a lead paint abatement. The notice he slapped on her door said the pipe in her bathroom had tested positive for lead.

She was given a paper, shared with THE CITY, that said she could either vacate the apartment while the lead abatement was performed, or remain cloistered in other rooms during the work.

“I really couldn’t leave. We were trapped. We had to stay in the room all day,” she said.

The workers spent the day in her bathroom, scraping off paint chips around the pipe and painting it over.

“There’s corona(virus) going around. There’s like four or five people in here. I was like, ‘Who are you? Why are you here?’ With no information at all,” she said.

The workers left and on Friday, NYCHA sent her another form stating that they’d be back to paint the entire apartment, but not the bathroom.

“I guess the lead thing is not over,” she said. “Somebody has to come and finish.”

On Monday, Barbara Brancaccio, a NYCHA spokesperson, declined to answer multiple questions about Bumpurs’ case, stating only, “We’re looking into the matter.”