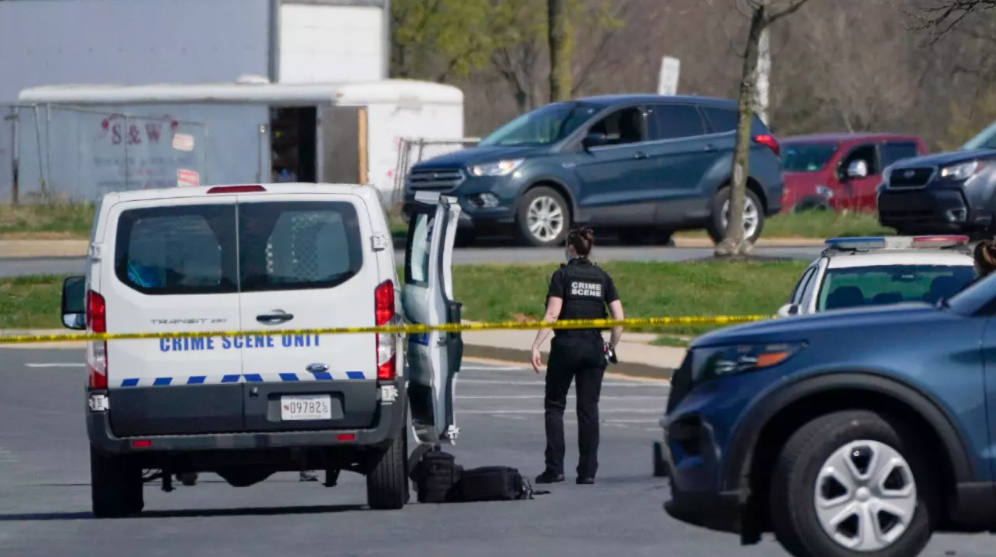 It was Alyssa Broderick’s worst fear: Her stepfather was out of jail and she knew she wasn’t safe.

Then 16, Alyssa told a court that Stephen Broderick had sexually assaulted her, and she pleaded with a judge to keep him away from her and her family. Broderick was out on bond while facing felony charges in the case, which would grow to include allegations of strangulation and years of abuse.

“I’m afraid that to him, a protective order will be just a piece of paper,” Alyssa wrote in a June application seeking such an order. “I’m worried that he’ll come after my family and try to take my brother. I’m afraid he might hurt me or my mom for coming forward.”

On Sunday morning in northwest Austin, law enforcement officials say Broderick shot and killed Alyssa; her mother and his estranged wife, Amanda Broderick, 35; and Alyssa’s boyfriend, Willie Simmons III, 18. Broderick, a former Travis County sheriff’s detective, then fled the scene and led authorities on a 20-hour manhunt that ended in his arrest Monday.

It shook the city and came after a series of high-profile mass shootings across the country. But advocates say the episode is a horrific example of a long-standing problem that hardly ever makes headlines: America’s criminal justice system too often fails to protect victims of domestic and family violence from their abusers — even when the warning signs are obvious.

Experts say this continues to hamper the nation’s response to a public health crisis that affects 1 in 3 women, along with many men and children.

“All the time, the potential danger — the lethality — is minimized, is overlooked and people are hurt, people die,” said Kelly White, CEO of the SAFE Alliance, an Austin nonprofit that serves abuse survivors. “It is a worst-case scenario to have a woman and two children be killed, that’s the worst-case scenario and it’s not new.”

Some officials argued that Broderick alone — and not the system — is to blame. White disagrees. At step after step in his case, she said, the system wasn’t watching close enough.

A Washington Post review of more than 130 pages of court records reveals that, despite his November indictment on 10 counts of sexual assault of a child and two counts of strangulation of a family member, and despite Amanda and Alyssa’s documented fears, Broderick had little supervision while out on bond.

After the sexual assault charges, Amanda moved out of town with Alyssa and the 9-year-old son she and Broderick shared. Alyssa left the school where she was a promising student and basketball player. A court-sanctioned visitation agreement required them to maintain some contact to allow Broderick time with his son.

It was during a Sunday morning custody exchange — which domestic violence experts consider one of the riskiest times for survivors — that Broderick allegedly opened fire.

After his June arrest for assaulting his stepdaughter, he spent 16 days in jail before posting bail — 10 percent of his $50,000 bond. A magistrate judge initially set bail at $100,000, but because Broderick could not afford it, his attorney asked for a reduction. A district judge agreed.

Broderick was also required to wear an ankle monitor that would track his movements and alert authorities to his whereabouts, but he was allowed to remove it in October, when his attorney argued that he’d gone 142 days with “no substantial violations” and had complied with the protective order. Yet three months earlier, prosecutors had alleged Broderick violated the order by sending his wife an email accusing her of a “cash grab.” Attached to it, they said, were intimate photos of her.

And he had a gun, police say, even though his bond conditions and the protective order forbade him from keeping or buying firearms. Authorities say they don’t know how he was able to get the pistol that was tucked into his waistband at the time of his arrest.

“It’s such a terrible statement to other survivors of family violence,” White said. “It’s an indictment of our whole system of responding and protecting and we just have to do better.”

The sexual assault allegations first came to light on June 3, according to court documents. Alyssa told her mother that Broderick assaulted her earlier that day, and Amanda rushed her to a children’s hospital. There, an exam found signs of trauma. Mother and daughter filed a police report. Amanda left the home with both children, ultimately moving to the Houston area.

Within days, authorities arrested Broderick and the sheriff’s office put him on administrative leave. He would ultimately resign.

In the application for a protective order, Amanda wrote that Broderick called her some 30 times after she left home. She feared he would come after her and the children, she said, “because these allegations have come out and he may lose his career.” He could be dangerous, she warned.

“Stephen has prior military experience and is SWAT trained,” Amanda wrote. “If he wanted to hurt someone he would know how.”

She filed for divorce in July, noting the sexual assault case. She asked a judge to “deny, restrict or limit” Broderick’s access to the children. If visitation was required, she asked for it to be supervised, with the custody exchange in “a protective setting.”

When prosecutors notified a judge of Broderick’s “cash grab” email, they asked for bond to be increased to $75,000. The judge agreed. Broderick apparently remained free.

In August, the estranged couple agreed to a protective order that would continue until 2022. It granted Broderick supervised visits with their son one Sunday per month. He could communicate with Amanda to make arrangements.

Peter Lopez, the attorney who represented her in the restraining order and divorce proceedings, said in an interview that she did not want Broderick around her daughter. But she hoped their son could continue to have a relationship with him.

“All she wanted was what was in the best interest of the kids,” Lopez said. “She did absolutely everything she could, and even to the point where it might have been a problem. Because like I said, she wanted the son and father to maintain a relationship. I really think her motive was the best interests of the children.”

State District Judge Karen Sage, who signed off on the removal of Broderick’s ankle monitor in November, did not respond to interview requests or an emailed list of questions. But she told the Austin American-Statesman that she often allows defendants to remove tracking devices after 90 days if they’ve complied with the restrictions.

“It’s a pretty common thing for me to do, frankly,” she said.

Around the same time Broderick took off the monitor, a grand jury returned the 12-count indictment alleging sexual assault of a child and strangulation. The counts covered abuse allegations stretching back to 2017, with Alyssa the victim.

As the case worked through the court system, the separated couple met for Broderick’s visits with their son. Amanda would arrive first and then hand the boy over to a facilitator, who brought him to his father and supervised their time together.

On Sunday, according to an arrest warrant, the facilitator planned to meet Amanda in the parking lot of the Austin apartment complex and then bring the boy inside to Broderick. But before she could pull in, she heard what sounded like a car crash, followed by gunshots.

A woman driving in the area told police she saw a young boy running. He flagged her down and jumped into her car, asking her to call 911. He told her his father had rammed his car into his mother’s and then started shooting. His father, he added, had been angry about the divorce.

Paramedics arrived but soon pronounced Amanda, Alyssa and Willie dead. By then, Broderick was gone.

While searching for him, police warned he was armed and dangerous, at one point suggesting he might take a hostage. They urged nearby residents to shelter in place. They finally arrested Broderick in the Austin suburb of Manor, after receiving 911 calls about a man walking along the road.

Travis County District Attorney José Garza said Monday that his office will present capital murder and other charges to a grand jury and that he will request that Broderick be held without bail. In an interview, Garza said Broderick “had specialized skills and knowledge about our system and other things that he used and exploited to commit a heinous crime.”

Garza, whose term began in January, said he is confident his office “did everything they could to keep this family safe and I am incredibly proud of their work.” But in general, he said, “there are far too many survivors and victims of domestic violence who feel like they are not heard, who feel like they can’t always get justice in this system.”

“We have made some changes and reforms over the last three months in our office to make sure we continue to build a system where victims and survivors of domestic violence are believed and listened to and where their needs are centered,” Garza said. “But I think as a system, we still have some work to do.”

In recent years, at least a dozen women have sued the Travis County district attorney’s office and Garza’s predecessor, alleging authorities were not adequately investigating or prosecuting the sexual assaults they reported. “They received little support and no justice at all from government officials sworn to protect them and the public,” one lawsuit says.

Manor Police Chief Ryan Phipps, whose officers helped arrest Broderick, defended the justice system and said the accused is the only person to blame.

“We can ‘what if’ this terrible situation to death,” he said. “There is always going to be tough situations and tough calls. Is it the prosecutor’s fault? The judge’s fault? Ultimately, this man made a very bad decision to do something horrific.”

Heather Bellino, head of the Texas Advocacy Project, which provides free legal help to abuse survivors, describes the system as being “made up of good people trying to do right” but one riddled with flaws.

There are too many breakdowns in communication among law enforcement officials, Bellino said. For instance, if a court places conditions on a defendant’s bond, police officers are often unable to see them in the state’s electronic database and thus cannot enforce them, she said.

And even though Texas has a law meant to prevent perpetrators of family violence from possessing firearms, few localities have protocols in place to ensure guns are handed over to police, Bellino said. This is a dangerous oversight since research shows abusers are far more likely to kill their intimate partners when they have access to guns.

Episodes like the Austin one not only expose the system’s failures, they spread fear among those currently living in abusive relationships, providing a high-profile example of the worst possible outcome, said White of the SAFE Alliance. But, she added, it should also catch the attention of lawmakers and prompt something else: change.

“This is a horrible way to change a system, but when the worst happens people take note and start fixing it and closing those holes,” White said. “So let’s hope that happens.”

As captain of the Elgin High School football team, Willie had been recruited to play at the University of North Texas, and he proudly posed for photos in the school’s “Mean Green” uniform. Alyssa was a standout on the high school’s basketball team and had WNBA dreams, the American-Statesman reported. A former coach told USA Today she used to dance in the locker room.

Amanda was a nurse and a devoted mother, always cheering her daughter from the stands.

For days after their deaths, mourners left flowers and pictures outside the high school. An online fundraiser set up by Amanda’s co-workers surpassed its goal in 24 hours. A close friend of Alyssa’s started a second fundraising effort for her little brother, the lone survivor, who turned 10 years old on Tuesday.

This article was originally posted on Before Austin shooting, suspect’s family pleaded for more protection: “I’m afraid he might hurt me”