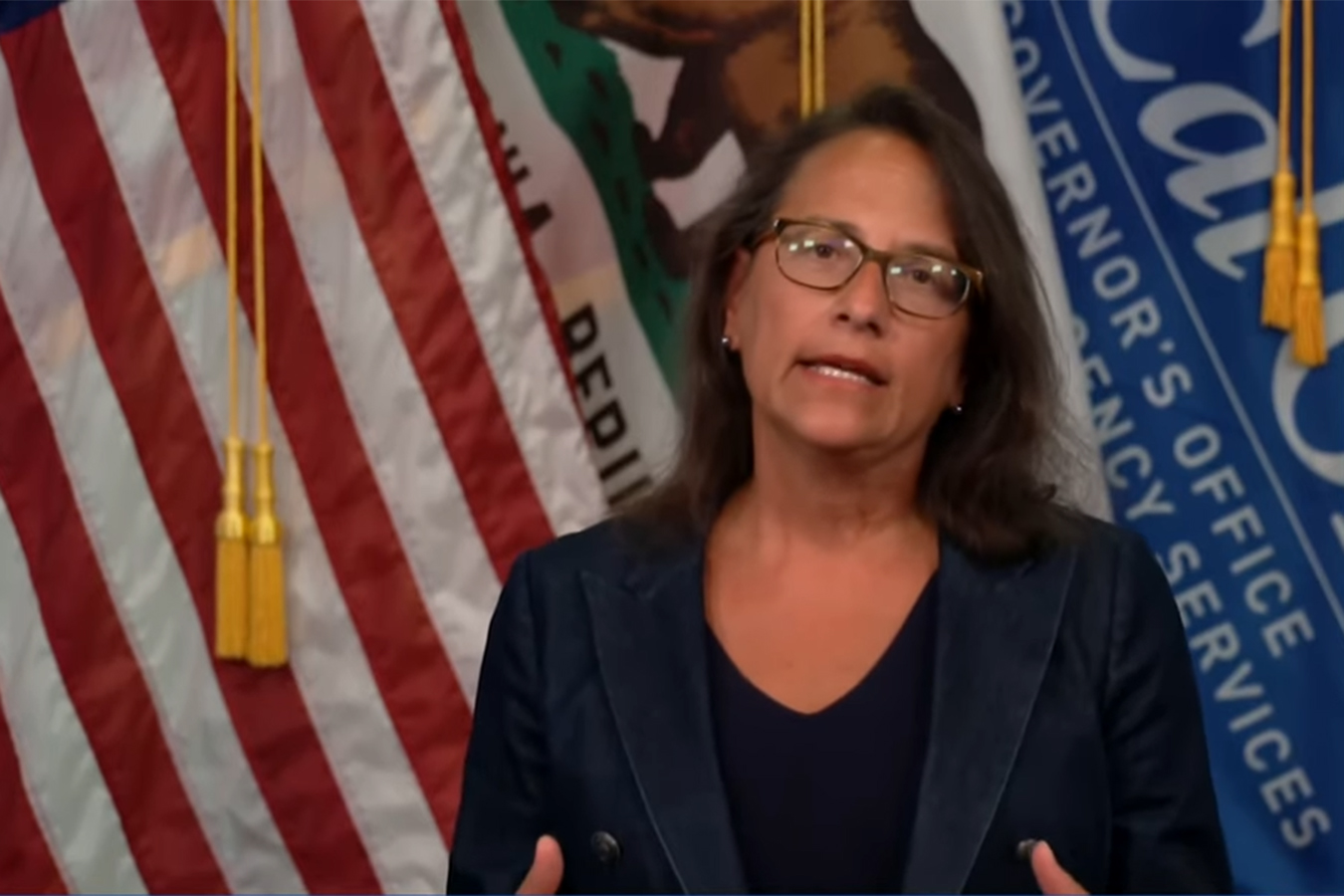 Coyle is head of the California Hospital Association, and her “troops” are the highly paid hospital executives she represents. Throughout the pandemic, as in the December memo in which she quoted Churchill, she has employed battlefield rhetoric to galvanize their massive political and financial clout.

That’s because Coyle believes hospitals are quite simply “in battle conditions” — a sentiment she has impressed upon the state’s top health care officials.

While Coyle, 60, is unknown to many Californians, she is a power player in the state Capitol, one whose profile and influence have grown in the past year. She has used her position as president and CEO of the association to lobby for the multibillion-dollar hospital industry, including asking officials to temporarily relax guidelines intended to safeguard patients and workers.

Along the way, she has been granted personal access to Gov. Gavin Newsom and other top officials, helping shape the state’s response to covid-19.

“Having spent many, many hours embedded with the Governor’s team in the state’s Office of Emergency Services, everyone is working 18-plus hours a day,” she wrote to hospital executives in March, “and the dedication to supporting what hospitals need to do their jobs is impressive.”

Though she hasn’t won every battle, Coyle has scored some big wins for the industry.

She successfully petitioned the Newsom administration to relax nurse-to-patient ratios and allow health care workers exposed to the coronavirus to continue to work — critical but contentious rule changes intended to keep hospitals staffed that were approved over union objections.

When hospitals started to fill with covid patients last summer, Newsom agreed with Coyle that hospitals could care for them while also performing moneymaking elective surgeries, which hospitals had voluntarily canceled in the spring.

Newsom invited her to a July press briefing to explain that logic to the public. At the briefing, he described Coyle as an “outstanding partner” and a leader with a “seriousness of purpose.”

“I just can’t thank her enough, more publicly than I have in the past, but I need to repeat it yet again,” Newsom said. “We’re all being put to the test, particularly our hospital system at this moment.”

That Coyle, a relative newcomer to Sacramento politics, is such an influential advocate in the Capitol comes partly with the job. She represents more than 400 hospitals that provide not just critical care, but also jobs to Californians in every corner of the state.

In the first three quarters of 2019, California’s hospitals earned about $101.7 billion in net patient revenue, according to financial data filed with the Office of Statewide Health Planning and Development. During the same time last year, they earned about $97.6 billion — representing a 4% decline — despite the loss of elective surgeries and a drop in emergency room visits early in pandemic.

The California Hospital Association is a health care heavyweight in Sacramento, along with the doctors’ lobby, the dialysis industry and others. It spent nearly $5.3 million on lobbying from Jan. 1, 2019, to Sept. 30, 2020, and $4.3 million to support state and local political campaigns, according to filings with the California secretary of state’s office.

“The hospitals are such a big player that you have to be working with them,” especially during a public health outbreak, said David Panush, a Sacramento health care policy consultant who worked in state government for 35 years.

Coyle also has the ear of Mark Ghaly, secretary of the state Health and Human Services Agency. Ghaly and Coyle have corresponded often since March — sometimes multiple times a day — by phone and email about the state’s response to the pandemic, according to emails obtained by California Healthline.

For instance, in March, Coyle shared a letter with Ghaly that she had sent to hospital executives, in which she warned them — and by extension, him — that “we are in battle conditions, and it’s all hands on deck to turn the tide.”

In other letters and emails, Coyle pressed Ghaly to allow health care workers exposed to the virus to continue working as long as they didn’t show symptoms. Newsom later issued the rule in an executive order.

“Nurses are the heartbeat of the hospital,” said Stephanie Roberson, government relations director of the California Nurses Association — whose leaders, unlike Coyle, have not been invited into the governor’s state operations center since it was activated in March. “Instead, we have someone who basically represents the opposite of nursing interests standing alongside the governor discussing the importance of public health.”

In a recent statement, Ghaly said the pandemic has required the state to work not only with hospitals but also with doctors, nurses, public health departments, nursing homes, laboratories and emergency services agencies to save lives.

“I am grateful to Carmela and our hospital partners for their tremendous work, particularly during this current surge when hospitals are overwhelmed with patients and intensive care units are filled,” Ghaly said.

It took the administration six months to direct hospitals to test health care workers for covid at least once a week after requiring nursing homes to do so — a testament, critics say, to the hospital industry’s political and economic impact.

“The association exists to increase profits for hospitals, increase the bottom line,” said Sal Rosselli, president of the National Union of Healthcare Workers. The union lobbied for the mandatory testing rule, which took effect in December. “That’s why they oppose every patient care advocacy issue, every worker issue.”

Coyle countered that hospitals have no choice but to make trade-offs while they provide crisis care. She emphasized that the hospitals’ requests for exemptions are temporary.

“If we don’t flex some of these requirements, it means that people will not get the care they need and, worse, people may die,” she said at a news conference earlier this month.

Coyle, a Minnesota native, is known for her intelligence and the expertise she has honed working on health care policy for more than 30 years.

As head of the Maryland Hospital Association for nine years before she took the California job in 2017, Coyle built a reputation as a consensus builder even as she looked out for her constituency. For instance, she cultivated relationships with Maryland’s congressional delegation and lobbied it for federal funding in 2014 to help the state’s hospitals prepare for and treat Ebola patients, most of whom were American health care workers who had contracted the virus in Africa.

“She really understood the old maxim that there’s no such thing as permanent friends or permanent enemies. There are only permanent interests,” said Stan Dorn, a senior fellow at the advocacy group Families USA, who previously served on a Maryland commission on health care costs with Coyle. “She understood that it’s good to have good relationships with everybody because you never know, day after tomorrow, who is going to be important to your cause.”

Along with her credentials comes a strong streak of determination. After Coyle graduated from Minnesota’s Carleton Collegewith degrees in economics and Spanish literature, she worked at a Washington, D.C., flower shop until the Congressional Budget Office offered her a two-year internship. She had called to check on her application every Friday for three months.

Coyle “was raised to know” such perseverance as she grew up in a working-class family, the daughter of a Colombian immigrant father.

“Kids teased me and called me names when I was a kid, my father being dark-skinned and having a heavy accent,” Coyle said. “I was dark-skinned as well, and they just thought we were so strange.”

Laughed at for the way her father spoke, Coyle today unabashedly harnesses the power of language to sway government officials and public opinion — and to marshal her own hospital forces to lobby “with one voice.”

In the waning days of last year’s legislative session, Coyle warned hospital executives of the battles before them in the Capitol: bills that would come with hefty costs to hospitals should they pass.

In the end, the industry succeeded in blocking a bill that would have made it harder for hospitals to consolidate. But they didn’t get legislative approval to delay seismic retrofits at hospitals, as they had wanted. Lawmakers also passed a bill opposed by hospitals that requires them to maintain a 45-day stockpile of personal protective equipment, which Coyle had argued was unreasonable given that it has been in short supply.

“They’re not all-powerful, but certainly they’re influential,” said state Sen. Richard Pan (D-Sacramento), who chairs the Senate Health Committee. “And during covid, they’re taking care of patients. They’re the ones saving the lives of people who are intubated.”

When Coyle readied her troops for the legislative fights, she acknowledged they weren’t going to win every battle. She borrowed another World War II quote, this time from Gen. Douglas MacArthur, to explain to hospital executives that they may need to compromise.

“In war, you win or lose, live or die,” she wrote. “And the difference is just an eyelash.”