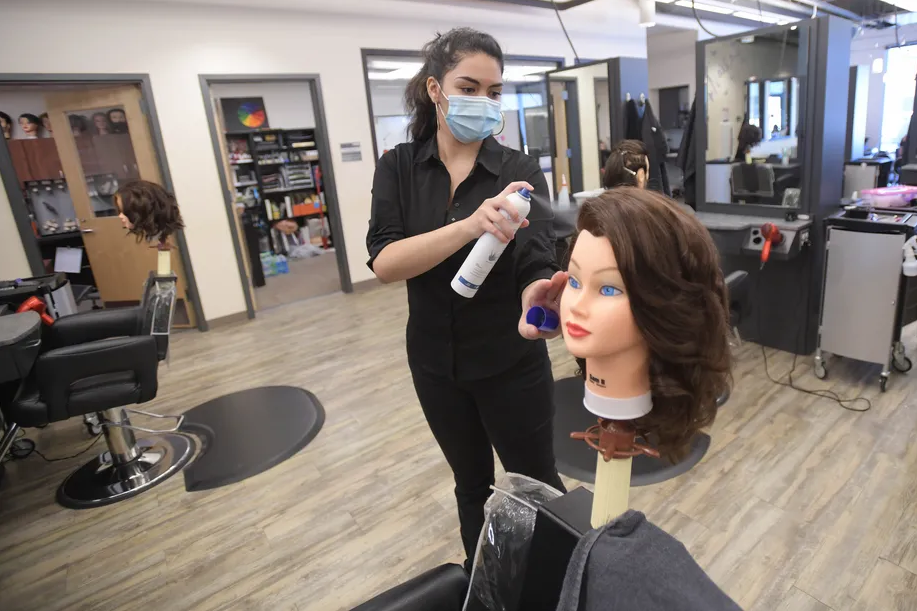 When Suzanne Fitts studied cosmetology in high school three decades ago, it was the start of a successful career as a hairdresser. The flexible hours let her raise her two children and assist at her church while making enough money to help support her family, she said.

Now a cosmetology teacher at the Porter County Career & Technical Center in northwest Indiana, Fitts sees the program as a good chance for students to earn affordable qualifications while in high school.

“I’ve also seen kids that it ignited more of a passion within their heart for schooling and for something that they want to do in life,” Fitts said.

But House Republicans don’t see cosmetology as a career worth investing in.

Under a proposed budget approved last month by the Indiana House, the state would cut funding for several popular career courses, including cosmetology, culinary arts, and radio and TV. This school year, more than 16,000 students enrolled in courses that could lose aid.

Without that money, schools may shut down programs that require expensive supplies and equipment. Some students may be forced to enroll in costly training programs after graduating. And others may drop out of high school altogether without the incentive of a career that excites them.

House Republicans say they are not aiming to undermine career education, and in fact, the budget projects an increase in money for career training of nearly 8% next year. But it diverts aid from programs in fields that state analysis considers low paying and low demand. That funding would instead go to courses in areas that are typically higher paying, such as nursing, biomedical science, and welding.

“That’s where the money went, and that’s where we are putting our focus,” said House budget leader Tim Brown, R-Crawfordsville, during a debate last month.

When it comes to programs like cosmetology, Brown said, “a school will still have the option of offering this class, they just won’t get extra money.”

But few observers outside the statehouse are excited about the current proposal.

Officials from the Governor’s Workforce Cabinet and the Indiana Chamber of Commerce said the cuts would be too abrupt, and any changes to state funding should be part of a broader, ongoing review of which careers to prioritize. At the same time, the potential cuts have ignited fierce opposition from career teachers who say their fields are being denigrated.

“This kind of came from left field,” said Dan Ulrich, executive director of the Indiana Association of Career and Technical Education Districts.

If the state decides to cut funding, Ulrich said, many schools will likely close programs.

The state budget is still taking shape, and the plan to cut funding could change. The Senate will produce its own proposal before the two chambers negotiate a final agreement.

P.J. McGrew, executive director of the Governor’s Workforce Cabinet, said the proposal to eliminate support for certain careers is coming at the wrong time.

The state is currently changing career training courses and reviewing the methods it uses to determine the value of courses, he said.

“Prior to going through that process, I don’t know that it is appropriate to change funding levels,” McGrew said. “The timing is a little bit off.”

In recent years, Indiana lawmakers have focused on connecting education and workforce development, part of a national trend that is widely supported by both Republicans and Democrats.

Not all students will make it through four-year colleges, and many in-demand careers require certifications rather than bachelor’s degrees, advocates say. By helping students earn credentials in high school, technical education can give them a head start on better-paying jobs.

But not all career training is created equal. While Indiana cosmetologists make about $28,000 per year on average, people who work as welders make about $42,000, according to federal data.

The state funding formula is designed to reward schools offering courses that will help students get good jobs and help employers fill positions. Courses that are considered “less than moderate value” based on state analysis already get lower funding.

Encouraging schools to offer training for high-wage, high-demand careers makes sense because it will improve opportunities for students — especially those who go straight into the workforce, said Jason Bearce, vice president of education and workforce development for the Indiana Chamber of Commerce.

But state leaders should be thoughtful about deciding what programs to cut funding for, and that process will take time, he said.

“I understand there’s a sense of urgency to make some of these changes,” Bearce said. But “we need to be realistic and understanding of the plight of people who are doing this on the front lines and not just inadvertently pull the rug out from under them.”

A good student in high school, Jacob Klotz planned on pursuing politics. But he decided to enroll in the culinary arts program in Porter County because he was a fan of cooking shows such as “Hell’s Kitchen.”

Klotz, 20, loved his high school courses so much, he enrolled in culinary school after graduation. Now, he works as a cook at a restaurant in Valparaiso, where he largely manages the kitchen.

“I love my job. And I love the people I work with,” Klotz said. “If I didn’t have this option of culinary tech center, I probably wouldn’t be in this industry.”

Career education also has potential academic benefits that could be lost if programs are cut. Shaun Dougherty, an associate professor of public policy and education at Vanderbilt University, has found that students who attend high schools dedicated to career training are more likely to graduate.

If programs like cosmetology or culinary arts are cut, some students may drop out, Dougherty said. Even if high schools add other courses that get state funding, they won’t necessarily attract the same students.

“We should not make the assumption that the students who want to do culinary arts or cosmetology are the same ones that will get transferred into these other programs,” Dougherty said. “There aren’t a group of 14-year-olds walking around saying, ‘no matter what, I want to do technical education.’ ”

This article was originally posted on Culinary arts, cosmetology programs are in jeopardy in Indiana House budget