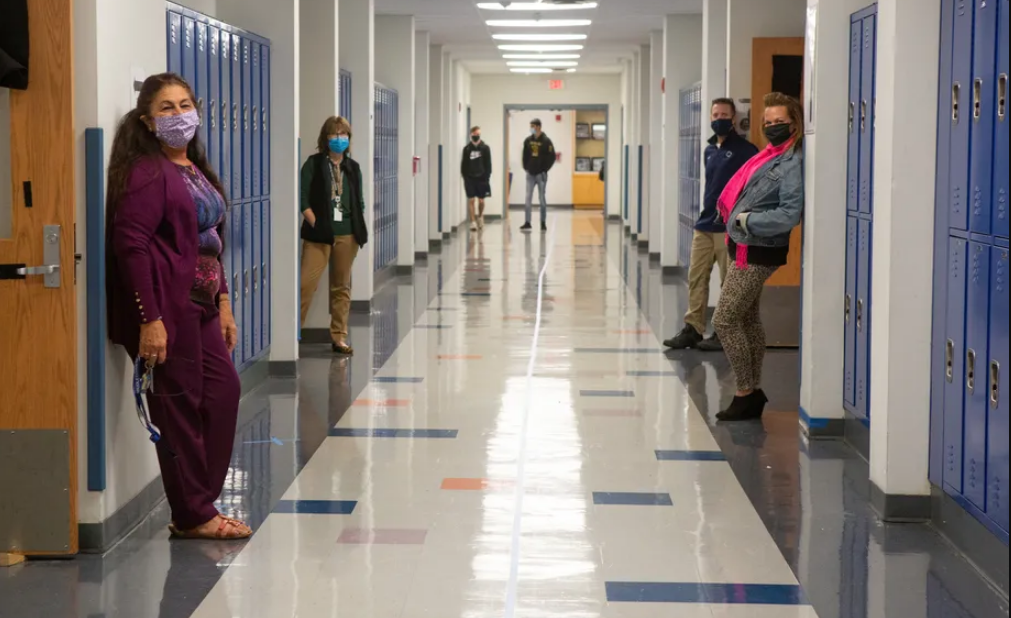 It’s been a tough year for Stefanie Miller, a second grade teacher in Broward County, Florida. Last spring, she contracted a serious case of COVID-19, was on a ventilator for three weeks, and has had lingering symptoms, including fatigue, memory loss, and lung problems. Miller taught remotely this school year and found it tough to keep students engaged.

“I need my health insurance, especially as I’m recovering from COVID. And I need the paycheck,” said Miller, who has been teaching for 25 years and would also lose much of her retirement benefit if she left now. “Trying to find a new job in the middle of the pandemic wouldn’t be easy either.”

While some news reports and polls triggered fears of a “massive wave” of teacher resignations going into this school year, that doesn’t seem to have happened.

But as the economy improves, and teachers have more options, will that change?

Experts warn we are about to enter a new period of flux as the school year ends and more teachers consider whether to leave after another year of heightened stress. That could lead to a small but meaningful uptick in teachers leaving their schools.

“If the economy accelerates with all the government spending, as I anticipate it will, outside-of-teaching opportunities are going to look pretty good, so we may well face some staffing challenges,” said Dan Goldhaber, a leading researcher on teacher quality issues at the University of Washington. But, he emphasized, such challenges likely won’t be felt across the board, but rather in subjects like special education and math and science, as well as in schools with more low-income students and more students of color.

Goldhaber, an economist, was always skeptical of a turnover spike amid the pandemic since  people are less likely to quit their jobs during a recession, because it’s hard to find a better one.

There’s no complete national data yet — that will take years, if it ever comes. But some state and local data show modest declines, rather than increases, in teacher turnover.

New York City schools Chancellor Meisha Porter emphasized that school staff have responded to the pandemic in different ways. “People have just been exhausted and have said, I’ve just got to go,” she said during the hearing. “But we’ve also had people say I’m going to stay because I can’t leave my school at this moment.”

Data from the beginning of this school year from four states shows that more teachers remained at their school compared with prior years. In South Carolina, teacher turnover hit a five-year low. In Colorado, the share of teachers leaving or switching districts declined from 16% to 14%. In Washington state, that figure ticked down from 16% to 15%. Teacher turnover also dipped from 19% to 17% in Michigan, according to recent Chalkbeat analysis.

Katie Nash, a high school science teacher and local union president in Chandler, Arizona, said teacher retirements and resignations didn’t change much in her district to start the year. “There wasn’t a huge difference,” she said. “I think we actually had less, which was kind of surprising.”

Teacher retirements — which are only a part of overall turnover — have varied a lot from state to state. In some cases they’ve increased, but in others they have held steady or declined. Some people have also raised concerns about fewer students training to become teachers, but there’s little clear data on this either way.

But if the economic downturn helped keep teachers in the classroom, an improved economy could lure some of them out or deter others from entering.

An analysis by Goldhaber and colleague Roddy Theobald found this pattern in Washington state. From 1985 to 2020, when the state’s unemployment rate went down, more teachers tended to leave or switch schools; when unemployment was higher, more teachers stayed put.

Even still, these ebbs and flows were fairly modest. Total teacher turnover typically hovered from 15% to 20%.

A year of working longer hours  and juggling in-person and remote students plus a stronger economy could find states like Washington facing an uptick in turnover.

“I know a lot of my friends are looking at other options,” said Miller, who was a plaintiff in an unsuccessful lawsuit filed by the Florida teachers union to halt school reopenings. “It’s just way too stressful. It takes a toll on you mentally and physically.”

And news coverage has featured frequent criticism of teachers and their unions.

“Most of us poured our heart and soul into these virtual lessons,” said Nash. “To have people turn it around and say you’re just sitting there with your feet up … it wears on you after a while.”

We won’t know whether this school year prompts a jump in turnover  — midyear turnover is rare — until teachers decide whether or not to return for next year.

“I feel like that’s more telling,” Nash said. “People kind of stuck it out through the year because that’s how teachers are — we don’t want to leave our kids in the lurch.”

Long before the pandemic, some schools and students have borne the brunt of teacher churn, while others rarely experience it. For instance, a Chalkbeat analysis in Michigan found that in high-poverty districts like Flint and Detroit, from a quarter to a third of teachers left every year. In some very affluent areas it was much lower, from 5% to 14%.

National data from 2012 found that while 13% of teachers in affluent schools left that year — either to switch schools or exit teaching — 22% of teachers at high-poverty schools departed. Turnover is also substantially higher among special education teachers and teachers of color.

“There is a shortage that is much more acute in high-poverty schools,” said Emma García, an economist at the Economic Policy Institute, a progressive think tank.

Although teacher turnover isn’t always bad — it can mean less effective teachers are exiting or teachers are switching to a school that’s a better fit — on average, more teacher churn seems to harm student learning.

Even a modest rise in teacher turnover next school year could exacerbate staffing challenges at schools that have long struggled to attract and keep quality teachers. The infusion of money coming from the federal government, particularly to high-poverty schools, could help, but it’s temporary.

Ultimately, Goldhaber argues, the conversation about teacher shortages and staffing challenges should shift from concern about nationwide shortages to persistent challenges in specific schools and subjects.

This article was originally posted on Despite pandemic, there’s little evidence of rising teacher turnover — yet