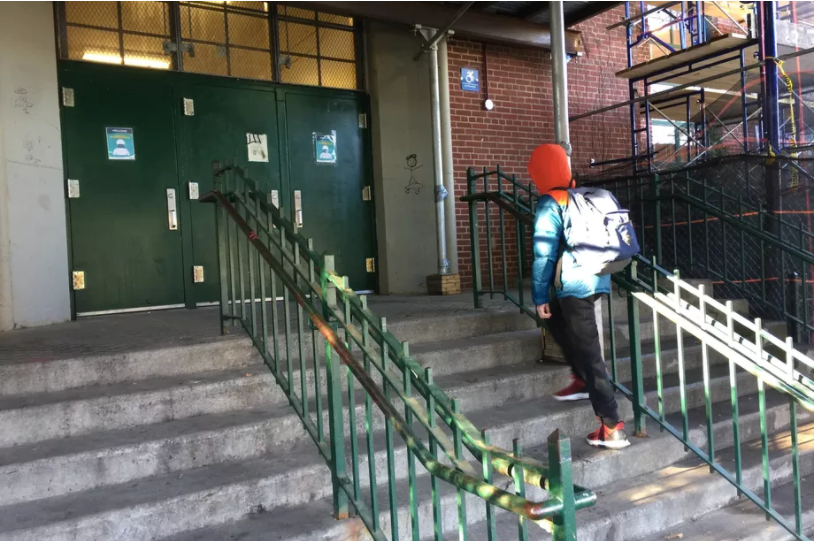 New York City is rethinking how to handle positive coronavirus cases inside of schools, and some public health experts now say that campus closures should be a last resort.

Epidemiologists and infectious disease specialists who spoke with Chalkbeat called New York City’s school closure threshold “overly reactive” and “very conservative.” Four public health experts agreed that in most cases, only true close contacts of infected people need to quarantine. Currently school buildings must close for 10 days when there are two or more positive coronavirus cases that have no clear links.

“I think it deserves a real thorough second look,” Dr. William Schaffner, professor of infectious diseases at Vanderbilt University Medical Center, said of the two-case limit. “I’m not so sure it’s needed.”

Mayor Bill de Blasio told reporters on Wednesday to expect details about the threshold “in the coming days.” The city could base its approach on a study published Tuesday in the journal Pediatrics, which found that between October and December, just 0.5% of the more than 36,000 people known to be exposed to someone with the virus in New York City public schools later tested positive — a rate not higher than that of the outside community. (City officials acknowledge that the rate among close contacts could be higher or lower, depending on how many people were tested.)

A change to the threshold could come as welcome news for families, students, and teachers who have faced frequent closures. As of Wednesday, there have been more than 1,800 extended building closures and more than 10,500 classroom closures since schools reopened in September. But it could also elicit backlash and concern from educators and families who believe that those measures are clear and appropriately strict in order to keep the virus at bay.

Some 60% of the 2,231 on-campus students and staffers infected with the virus were staff.

Public health experts said the new study reinforces prior analyses showing that schools rarely pose a high risk of transmission, especially when proper mitigation measures are taken, and that the virus is more likely to spread among adults.

Some raised questions about the study, such as what activities — eating in break rooms or traveling to school on the same bus — led to the “likely” in-school transmissions. The study also compared in-school data to infections in the community during that same time period, which two of the epidemiologists warned is not an apples-to-apples comparison — testing in schools was random, mandatory, and designed to catch asymptomatic cases, while testing in the community could be driven by factors such as symptoms of the coronavirus. City officials said researchers are comparing testing data to two statistical models “that attempt to estimate the prevalence of active COVID-19 infection in the community,” and don’t rely on how frequently people were tested in the community.

In the study, city health officials cite several constraints, including that just 41% of parents consented to have their children tested from October through November. Still, experts found the study compelling.

“While there are limitations to the study, transmission seemed to primarily be among adults, which is consistent with our knowledge that younger children may be at lower risk of transmission [of COVID-19] and reinforces the importance of vaccinating front line workers such as teachers and educators,” wrote Dr. Amanda Castel, professor of epidemiology at the Milken Institute of Public Health at George Washington University, in an email response.

Those results bolster the case to rethink the city’s policies when it comes to positive cases of COVID-19 within a school building, these experts said.

An entire school building can be closed for 10 days if there are two or more positive cases at the school without any clear links, such as being in the same classroom or living in the same home. Multiple classrooms, instead of the whole building, can be closed if multiple positive cases are linked or if health investigators find that those infected were exposed to the virus outside of school.

Castel said only true close contacts of the infected person should be quarantined, and that might not mean everyone in the person’s class. Dr. Elissa Perkins, director of infectious disease management at Boston Medical Center’s emergency department, agreed, noting: “If you have people who are 6 feet apart [in a classroom], nobody should be a close contact.”

But it will be difficult to get the city teachers union to agree to any changes to closure rules. The union opposes any adjustments and argues that the reason why spread appears to be low in schools is because of the strict protocols.

“We’re going to continue to do what we’ve always done in terms of this virus,” said Michael Mulgrew, president of the United Federation of Teachers, during an unrelated press conference on Wednesday. “We listened to medical experts, and right now we know that why we don’t have spread inside of schools is everything in our plan that was designed by independent medical experts.”

Mulgrew said sticking to the rule is essential in winning parents’ trust. If there are two unlinked cases in a building, “we can’t tell how the virus got into the school with two different people.”

“There might be some people who say, ‘It ain’t broke, don’t fix it,’ or others who say this gives us an opportunity to look at what we’re doing and not be quite so conservative,” Schaffner, of Vanderbilt University Medical Center, said. “That’s why you have good, well-intentioned people sitting around thinking about that.”

Once someone tests positive, city officials should figure out what the virus mitigation measures looked like in that person’s classroom. That means determining if people keep their masks on, if they stay distanced, if the room is adequately ventilated and frequently disinfected, Castel said.

If there are multiple cases where the only link is school, such as two classmates sitting next to each other, “then it is reasonable to trigger an appropriate level of closure,” Castel said. But if the investigation finds that the risks are low or if the infected person was most likely exposed to the virus outside of the building, “then it is probably safe” to keep the classroom open and require only those who are true close contacts to quarantine.

Ultimately, it may be tough for the city to pull off more detailed investigations. Teachers and lawmakers have complained about the responsiveness of the so-called Situation Room, which investigates positive cases in schools. The city has promised to beef up the office’s staffing.

Hassig and Perkins noted that it will be important to stay vigilant as scientists study new coronavirus variants, some of which are thought to spread faster and lessen the effectiveness of vaccines. Because of those unknowns, the mayor’s insistence on cutting out hybrid learning may be “premature,” Hassig said.

“I think we will be in a much better place by the fall, but this virus has fooled us so many times, that not having a backup plan for remote options or possible hybrid, I think, would be potentially problematic,” Hassig said.

Perkins is hopeful that social distancing can be relaxed. She co-authored a new study, published Wednesday, which found the risk of contracting COVID-19 was similar among students and staff in Massachusetts districts that kept a distance of 3 feet and those that stayed 6 feet apart. The study notes that they were unable to determine if students and staff were infected in school or elsewhere.