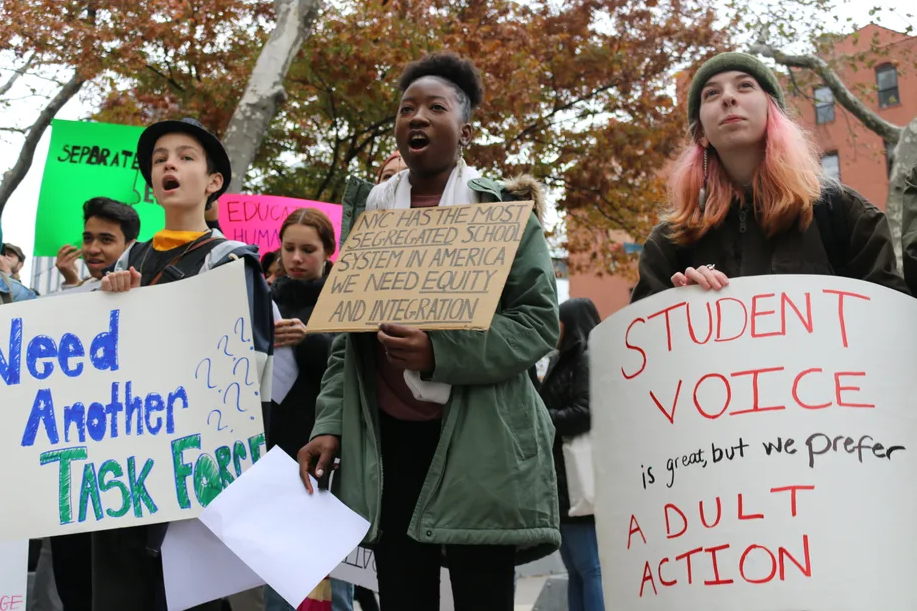 A group of New York City public school students filed a lawsuit Tuesday charging that the city and state are denying students a “sound basic” education by maintaining segregated schools.

The suit, filed in Manhattan’s Supreme Court, claims that the city’s use of selective admissions screens, its lack of a culturally representative curriculum, and its disproportionately white teaching force compared to the student body, all add up to violations of the state constitution and human rights law. By turning to the courts, the litigation marks a new tactic in a long-running battle to integrate New York City schools, which are among the most segregated in the country.

“If government’s goal were to create a system of education that would replicate and in fact exacerbate pernicious racial inequality in the city, it would be challenging to design a more effective system than that which currently exists,” the suit says. “An educational system that reproduces, validates, and even exacerbates the artificial racial hierarchies that have long structured civic, commercial, and social life in the United States cannot prepare its students for meaningful democratic and economic participation in today’s diverse society.”

The lawsuit traces a “racialized pipeline to the City’s prime educational opportunities,” starting with admission to gifted and talented programs that is based on a test given to 4-year-olds before they enter kindergarten, and continuing through the use of competitive screens in middle and high school.

Brought by lead plaintiffs IntegrateNYC, a youth advocacy group, and local students and graduates, the suit takes direct aim at the city’s competitive admissions practices. It calls for the elimination of the current admissions screens used for gifted and talented programs as well as selective middle and high schools, and a prohibition on any future screens that are racially discriminatory.

Additionally, the suit calls on the city to adopt evidence-based programs to recruit and retain school staffers who reflect the diversity of the student body, and for an oversight and enforcement system to “monitor conditions that deny students a sound basic education,” such as segregated schools or a lack of mental health supports.

“If this lawsuit is successful it would force New York City to eliminate many of the specific policies and practices that prop up the racial segregation in the system,” said Amanda Mangaser Savage, a lead attorney on the case with Public Counsel Opportunity Under Law, a pro bono public interest law firm.

Jesus, a student plaintiff in the case identified by first name only, described struggling to do well on standardized tests. Coming from a family of Mexican immigrants, he came to understand his scores were holding him back from opportunities that his mother had insisted he seek out in New York City schools.

“She was like, ‘Get an education because it’s good for you.’ But growing up and navigating the school system, it kind of felt like education was the thing that kept me away from the dream my mom wanted,” he said at a virtual press conference.

Entrance to gifted programs begins in kindergarten, based on the results of a single test that parents must opt into and that many pay to prep their children for. Many of the most sought-after middle and high schools base admissions on test scores, grades, interviews, attendance, or their own entrance exams — a system that is complicated and time consuming.

The city will review the suit said Danielle Filson, a spokeswoman for the Department of Education.

“This administration has taken bold, unprecedented steps to advance equity in our admissions policies,” she said in a statement. “Our persistent work to drive equity for New York City families is ongoing.”

Despite some district-level reforms, Mayor Bill de Blasio has largely declined to take top-down action to integrate schools. His resistance reportedly contributed to the abrupt departure of schools Chancellor Richard Carranza, who has much more forcefully questioned the city’s current practices. It remains to be seen what approach incoming schools chief Meisha Porter takes. She’s been outspoken about racial inequities, but also is confronting a major logistical puzzle in planning for what school will look like next year.

Advocates, meanwhile, have grown a network of grassroots support for more diverse and better-resourced schools, engaging in public pressure campaigns, which have included school walk-outs, testimony at public hearings, and repeated calls to the mayor during public radio show appearances.

There have been some legal efforts to force change, including a lawsuit over unequal access to school sports teams and a federal civil rights complaint over the use of selective admissions methods in high schools. But the current litigation was described as the first seeking such system-wide changes in New York City, which has never been subject to a citywide desegregation order. That is despite being home in 1964 to what’s thought to be the largest civil rights protest in U.S. history: a boycott where almost half a million children skipped school to demand desegregation.

Mark Rosenbaum, Director of Opportunity Under Law at Public Counsel, called the suit the first of its kind, describing it as seeking to establish a constitutional right to an anti-racist education.

“Education that is not anti-racist, like the education in New York City, is an education in name only. It is one that perpetuates a caste system, reproducing and legitimizing racial hierarchies,” he said.

Segregated schools result in unequal access to resources and facilities, the suit claims, noting that Black and Latino students reported lacking necessities as basic as toilet paper. One student reported being directed to kill a rat on a shelf at his Bronx school.

Other students said that a lack of culturally relevant curriculum and of representative teaching staff lead to racist and harmful moments in the classroom.

“At Brooklyn Tech, certain teachers insisted on saying—over student objections—the n-word aloud during To Kill a Mockingbird, asserting their right to use the slur because it was ‘in the book,’” the suit notes.

Public Counsel was also behind a lawsuit that sought to establish a constitutional right to literacy for all students. That case was settled with an agreement to provide millions of dollars more for Detroit public schools.