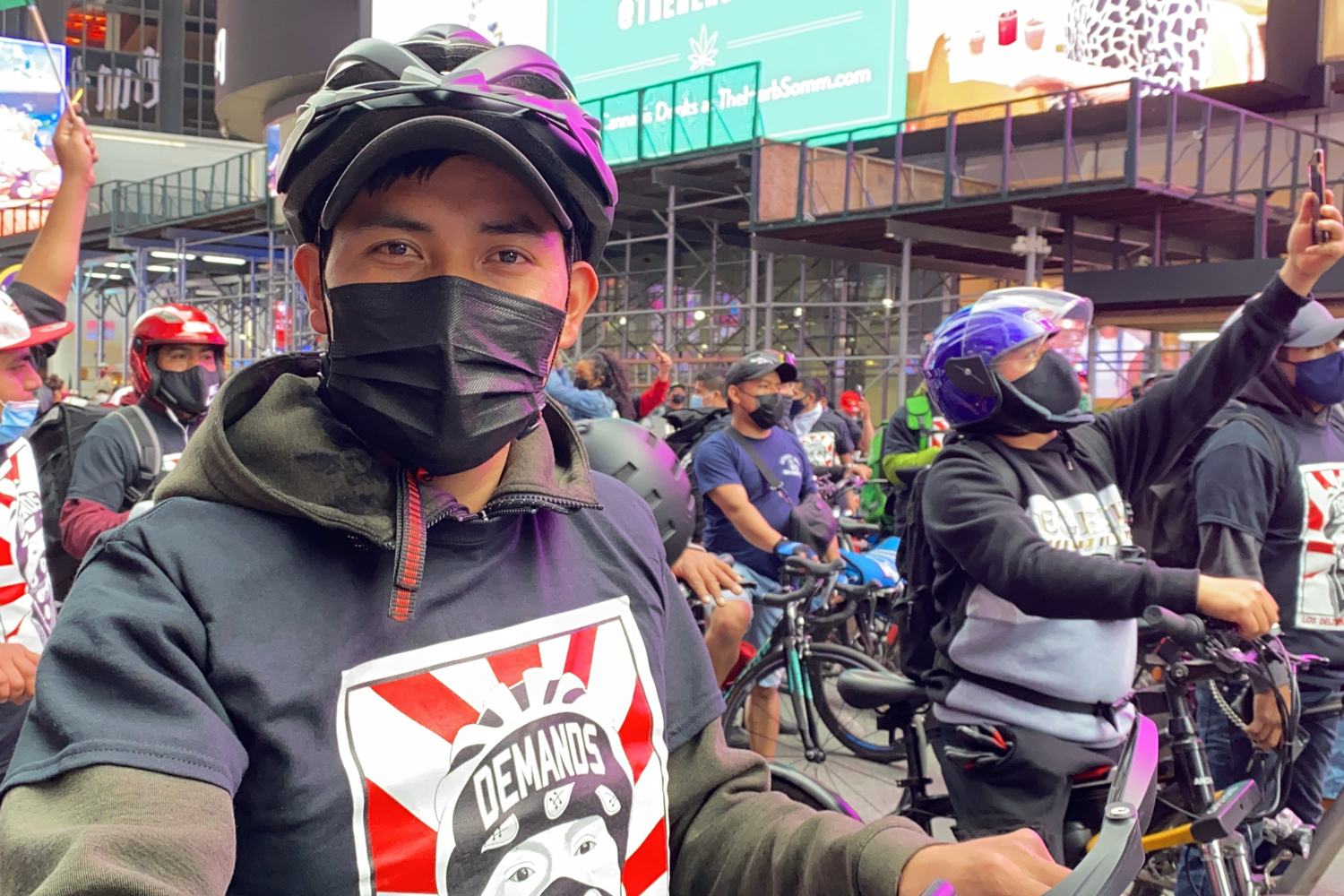 More than 2,000 food delivery workers biked from Times Square to Foley Square on Wednesday afternoon, briefly shutting down traffic on Broadway, to demand better wages and protections from the tech giants that run delivery app platforms.

Los Deliveristas Unidos had rallied before — but this time, the workers who spoke were joined by a powerful new ally: the city’s largest union of service workers. The union executive who spoke from the stage on behalf of SEIU 32BJ vowed: “We’re going to win together.”

The commitment from the 32BJ — the same union instrumental in winning city fast food workers an unprecedented $15 minimum wage six years ago — could be a game-changer for the Deliveristas.

As gig workers who pick up jobs by the swipe, they are not presently eligible to join a traditional union shop. But organized labor’s advocacy, legal support and political muscle could help power them to improved wages and working conditions.

Local 32BJ SEIU has been meeting with the Deliveristas behind the scenes for months, providing legal, legislative and other advocacy support, according to people involved.

Los Deliveristas Unidos, a collective of mostly Indigenous Guatemalan and Mexican food delivery workers, formed during the pandemic as demand for deliveries soared.

The workers banded over their increasing agitation at their status as contracted workers with few rights, small wages, and lack of access to bathrooms. The group is part of the Workers Justice Project, a Brooklyn-based day laborer advocacy organization.

The 32BJ support comes at a critical time for the workers as they assert their growing influence and seek to make the most of their elevated profile.

Since the group’s founding last year and coverage by THE CITY, the workers have won fast-track priority for COVID vaccinations. DoorDash, a multi-billion dollar delivery platform workers rely on and often despise, pledged to help relieve their strain through measures such as access to some restaurants’ restrooms.

“That we have this big, well-positioned and influential organization standing with us in solidarity means a lot to us,” he told THE CITY in Spanish.

Through the Workers Justice Project, Los Deliveristas Unidos reached out to 32BJ in January, seeking support.

At the top of the list are demands echoed at Wednesday’s rally: securing a living wage, getting recognition as employees by the tech companies, gaining access to bathrooms and safe waiting areas, and getting local law enforcement to clamp down on robberies. The deliveristas, many of whom cycle food to customers via e-bikes, also seek expansion of protected bike lanes.

The union responded and pledged support right away, Workers Justice Project executive director Ligia Guallpa told THE CITY. The groups have collaborated regularly ever since in refining the workers’ legislative agenda and goals, and check in “about once a week,” she said.

“The support from 32BJ — it’s critical, and it is a huge step for the workers,” Guallpa said. “Not just to validate their movement, but to build solidarity with others who are fighting for the exact same thing, which is defending their rights as workers, fighting for better working conditions and representation, against big, multi-billion dollar companies who are continuously investing in rewriting every single labor protection that has existed.”

Despite their alliance with the influential 32BJ, the workers are far from forming their own union. Because the app platforms deem them independent contractors, they don’t have many of the rights enjoyed by most American workers, including the ability to unionize.

But in New York and elsewhere, other so-called gig workers have pursued other paths to improved wages and working conditions. Drivers for Uber, Lyft and other for-hire vehicle platforms in New York have organized and won some improvements, including unemployment benefits.

The union has pledged support for the Deliveristas’ campaigns to pass laws, such as a measure that could allow them access to bathrooms at restaurants where they deliver. The union also offered access to its researchers, which would help the Workers Justice Project gather information about employers and inform their strategy.

A 32BJ legal team was present at a meeting the Deliveristas had with DoorDash representatives in mid-February, according to multiple people in attendance.

“32BJ SEIU has a long history of supporting worker movements beyond our membership. We’re standing with delivery workers, just like we’ve stood with taxi workers and farm workers,” Pastreich told THE CITY in a statement. “It’s our mission to lift up and amplify the voices of all working people.”

The throngs of Deliveristas who rallied Wednesday braved a brief afternoon rainstorm at the rally’s kickoff to bike downtown via Broadway from Times Square in their second major protest in the last six months. It marked their largest demonstration to date, Guallpa said.

The workers also rallied last month in East Harlem to honor Francisco Villalva Vitinio, a delivery worker who was shot to death on the job on March 22 in the neighborhood — allegedly by a thief who wanted to steal his e-bike, according to his family. Villalva Vitinio was 29 years old.

At Wednesday’s rally, the Deliveristas honored Villalva Vitinio and a dozen other workers who have died in the past year, most of them from COVID-19. After Washington Heights delivery worker Jonán Huerta read the names of each worker, the crowd shouted back.

While the collective’s ranks mostly includes workers from Guatemala and Mexico, the Deliveristas invited two new members from Mali to speak at the rally, in a sign of the group’s efforts to grow and diversify its membership.

“Food delivery is vitally important because we bring food to hungry New Yorkers: we’re bringing food to busy workers, we are bringing food to sick people in hospitals, to the elderly, and to everyone in quarantine,” said worker Ba Mamadou, who spoke “on behalf of African communities doing deliveries” in New York.