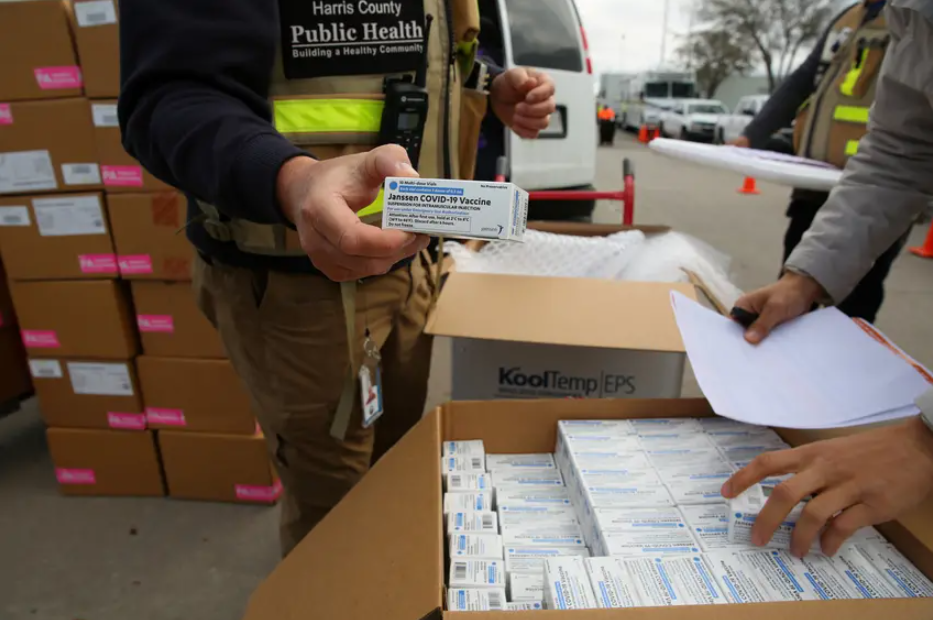 State health officials asked Texas vaccine providers to pause their use of the single-dose Johnson & Johnson COVID-19 vaccine early Tuesday after U.S. health officials recommended that states temporarily stop distributing the vaccine “out of an abundance of caution.”

The pause on the Johnson & Johnson vaccine came after a “rare and severe type of blood clot” was reported in six women across the nation after getting the shot. None of the six happened in Texas, state health officials said. About 500,000 doses of the Johnson & Johnson vaccine have been administered in Texas, according to a statement by the Texas Department of State Health Services.

Nearly 7 million people across the U.S. have gotten the Johnson & Johnson vaccine, according to the Food and Drug Administration.

A Centers for Disease Control and Prevention advisory committee is scheduled to meet Wednesday to determine the next course of action, which will give state health officials more direction on how long the pause might last or other next steps, said Dr. David Lakey, vice chancellor for health affairs and a chief medical officer at the University of Texas System and a member of the state’s Expert Vaccine Allocation Panel.

The biggest impact in Texas is likely to be on larger retail pharmacies such as H-E-B and other chains, which were anticipating that about two-thirds of the supply being delivered this week would be Johnson & Johnson, Lakey said. Because the vaccine is more stable and more easily stored than those produced by Pfizer and Moderna, it was also the vaccine of choice for mobile vaccination efforts, including the Save Our Seniors program, which targeted seniors in their homes, he said.

The news could also increase vaccine hesitancy, a problem that Texas and other states have continued to battle throughout the vaccination effort, Lakey said.

“Whenever an issue like this occurs, it will cause some concern not only about this vaccine but other vaccines, and I think that’s part of the message — that, especially with the other vaccines, that they have been very safe and effective,” he said. “We also know that COVID is here, and causes significant health consequences, so that … has to be put into that overall perspective.”

COVID-19 death and hospitalization rates across the state continued to drop this week, according to state data. As of Monday, the state reported around 2.4 million confirmed cases and more than 48,000 deaths from COVID-19. Nationwide, some 31.2 million cases have been reported, with more than 562,000 killed by the virus.

Texas was already prepared for a massive decrease in the doses to be allocated to local providers, both because the doses were largely being routed through federal pharmacy programs and because states were waiting on a production plant in Baltimore to be approved for distribution, health officials said last week.

All three mass vaccination sites run by the federal government in Texas announced early Tuesday that they will halt the use of the Johnson & Johnson vaccine and, when possible, switch to the other two.

In Arlington, officials announced that the Johnson & Johnson vaccine would not be given Tuesday at the Community Vaccination Center at AT&T Stadium, one of three Texas sites run by the Federal Emergency Management Agency, “due to the most recent federal guidance.”

Pfizer second doses will still be available to those who are due a second dose, officials there said in a tweet early Tuesday.

In Houston, health officials said Pfizer doses would be administered at its FEMA site at NRG Park instead of the Johnson & Johnson shot. Harris County health officials also said the vaccine would not be used at any other public health sites, and the county’s mobile vaccine sites would operate as scheduled, using Moderna vaccines.

And in Dallas, County Judge Clay Jenkins said its FEMA site in Fair Park would be using Moderna and Pfizer shots in place of the Johnson & Johnson vaccine. City officials also announced that a program to administer the Johnson & Johnson vaccine to older people who are confined to their homes, set to begin today, has been halted, according to a report in The Dallas Morning News.

The three sites were sent a total of 84,000 doses of Johnson & Johnson this week, according to state health officials.

Officials across the state were expected to follow the recommendations as well. In Bexar County, where about 4% of the 600,000 people vaccinated so far received the Johnson & Johnson shot, officials halted use of the vaccine in mobile efforts and encouraged residents to continue getting the other two vaccines. The mass vaccination site at the Alamodome has not been using Johnson & Johnson, city officials said.

The CDC and the FDA will conduct a review of the cases this week. According to news reports, one of the women died and one is in critical condition. All of the affected women were between the ages of 18 and 48.

The agencies recommend that recipients of the vaccine contact a doctor if they experience severe headache, abdominal pain, leg pain or shortness of breath within three weeks after vaccination, according to a joint statement by the FDA and CDC released early Tuesday.

“Right now, these adverse events appear to be extremely rare,” the statement said. “COVID-19 vaccine safety is a top priority for the federal government, and we take all reports of health problems following COVID-19 vaccination very seriously.”

Texas vaccine efforts, like those in other states, were already stymied this week by a dip in shipments of the vaccine. Texas had expected to get about half a million doses of that vaccine, but was allotted about 130,000 through both state and federal programs.

The Johnson & Johnson vaccine has been a boon for Texas vaccine efforts because the shot is more easily transported and stored, quickly increases the number of Texans who are fully vaccinated, and is the best one to use in mobile vaccine efforts, state health officials have said.

Health providers have also said the one-dose vaccine is especially popular among younger recipients, who also have been accounting for a larger percentage of hospitalizations as the state’s older Texans have been prioritized for the vaccine.

Lakey said Tuesday that the new development “does have a challenge for us in the state on a couple of levels” and that “there was quite a bit of demand for it because of the easier-to-use nature of this vaccine.”

“For the hard-to-reach groups, this vaccine was much more convenient than the Pfizer and Moderna vaccine,” he said.

About 130 local providers and 11 mass vaccine hubs, including the three federal sites, were allocated Johnson & Johnson vaccines for this week, according to DSHS. Many of those providers were in smaller communities, in rural Texas and along the border. Among them were clinics in the Hill Country and several suburbs, hospitals in West Texas and the Panhandle, and student health clinics at several universities. Most were in batches between 100 and 500.

Lakey said the Expert Vaccine Allocation Panel, which had its weekly allocation strategy meeting Monday, will be closely watching for further developments from the CDC but will continue to target these communities. DSHS officials have directed providers to continue storing their unused stocks of Johnson & Johnson, which can be kept in standard refrigeration conditions for three months, according to the CDC.

The hope is that the situation and direction will become more clear after the CDC’s Advisory Committee on Immunization Practices, the agency’s expert panel, meets Wednesday, Lakey said.

“The odds are that you are twice as likely to be hit by lightning than to have had this rare complication,” Lakey said. “But having said that, it is a significant type of blood clot and problem, so they really need to take a look at this and sort through the information, make sure they have the best data, and make sure that actually is the probability, and get as much information as possible. … It’s going to be important what the CDC decides about this tomorrow.”

Anne Schuchat, principal deputy director of the CDC, said in a Tuesday media briefing that the pause was recommended “in order to prepare the health care system to recognize and treat patients appropriately.” The risk of this type of complication for people who have gotten the vaccine “more than a month ago” is “very low,” she said. Those who have gotten it more recently should “be aware” and look for any of the more severe symptoms, she said.

“I know this has been a long and difficult pandemic in a very long year and a half, and that people are tired of the steps that they need to take in our community to be able to be vaccinated,” she said. “The steps we’re taking today are meant to make sure that the health care system is ready to diagnose, treat and report, and that you, the American public has the information you need to stay safe.”