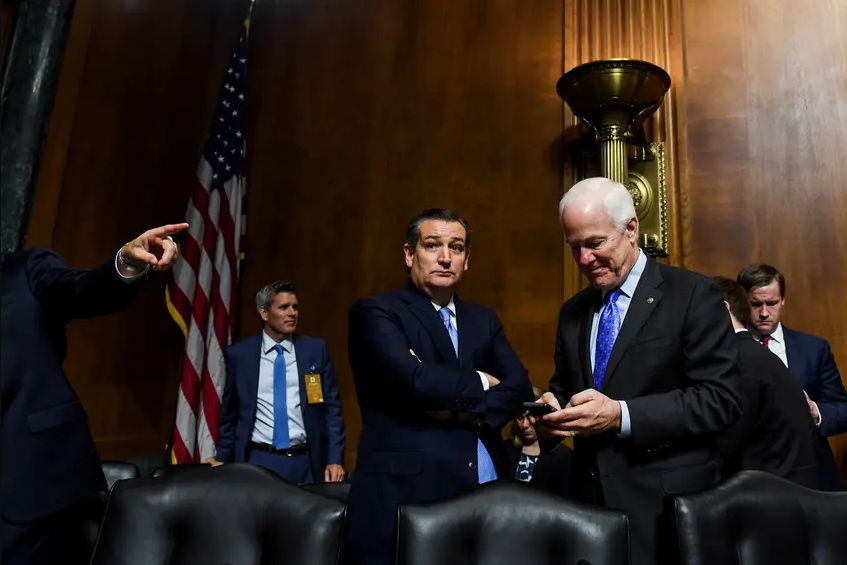 WASHINGTON – The act of filling President Joe Biden’s cabinet is nearly done, and Texas’ two Republican senators have taken divergent approaches to their roles in the confirmation process.

Their different strategies may shed some light on each senator’s role in a Democratic presidential administration and how they see their futures in GOP politics. But their strategies have also left the senators open to criticism of their consistency — and whether they’re opposing some nominees for things they excused or even encouraged during the Trump administration.

Cornyn, the state’s senior senator, has largely taken a more cooperative approach. In a conference call with reporters earlier this month, he said he thought a “new president should be able to pick, within the limits, the people he wants in his Cabinet.”

Still, he has spoken out on a small number of high-profile appointees. His six “no” votes were against Biden’s nominees for the secretaries of homeland security, energy, housing and urban development, the interior and health and human services, and for the administrator of the Environmental Protection Agency.

Perhaps his most vociferous objection was for Alejandro Mayorkas, who was tapped to head the Department of Homeland Security. In his position, Mayorkas oversees the Biden administration’s immigration strategy and national security concerns. Cruz and Cornyn were united in their opposition in that case.

In a letter to colleagues, Cruz slammed Mayorkas, who previously served as deputy secretary of homeland security and director of the U.S. Citizenship and Immigration Services under former President Barack Obama, for a DHS inspector general report in 2015 that said Mayorkas created the appearance of favoritism by intervening in the process of reviewing three visa applications.

Furthermore, Cruz criticized Mayorkas’ involvement in administering the “brazenly unlawful” Deferred Action for Childhood Arrivals and Deferred Action for Parents of Americans programs under Obama.Those programs delayed deportations of children brought into the country illegally or parents of Americans or permanent residents. DACA in particular has some support among Republicans, but many conservatives argue that both programs are an overreach of executive power. Texas is suing the federal government in an attempt to get DACA overturned. The courts prevented DAPA from going into effect.

“Even apart from this pattern of unethical conduct, Mr. Mayorkas has shown a repeated disregard for the rule of law,” Cruz said.

Cornyn, meanwhile, told reporters on Capitol Hill that “there’s a number of problems” with the nomination. He led a group of senators, including Cruz, in an attempt to stall Mayorkas’ nomination by having him face the Senate Judiciary Committee for extra scrutiny.

That effort failed and Mayorkas was narrowly confirmed by the Senate. Six Republicans voted in favor of his nomination.

Cornyn and Cruz were also united in their opposition to Neera Tanden as the pick to lead the Office of Management and Budget.

Tanden’s nomination ran into trouble due to a series of critical tweets she wrote about current senators prior to her selection. She reportedly deleted hundreds of tweets in November, including one in which she wrote “vampires have more heart than Ted Cruz.”

Cornyn described her comments as “combative and insulting,” according to The Washington Post, and said they created a “problematic path” to confirmation.

That sentiment brought charges of hypocrisy, given the viciousness of former President Donald Trump’s engagement with Twitter. Trump routinely insulted political adversaries on social media, sometimes using sexist or racist language. At times Cornyn pushed back on Trump’s coarseness, but critics were quick to note the times Cornyn did not amid the Tanden criticism.

After it became clear that she didn’t have the votes to be confirmed, the Biden administration withdrew Tanden’s nomination before it reached the Senate floor.

Texas Democrats, as expected, were quick to point out the senators’ scrutiny this time around compared to four years ago.

“Cruz and Cornyn approved unqualified judicial candidates and many other Trump appointees that were unqualified, both professionally and morally, even after their deficiencies were brought to their attention. It is undisputed that all of Biden’s appointments have the highest level of qualifications as we have ever seen in recent history, and we should be proud of them,” Gilberto Hinojosa, chairman of the Texas Democratic Party, told The Texas Tribune in a statement. “But Cruz and Cornyn persist in putting party and politics over country and the welfare of all Americans. But this comes as no surprise. Their shameless partisanship has come to identify their character and Texans are be embarrassed to have them as their U.S. senators.”

In many other cases, Cornyn and Cruz diverged with their votes. This year, Cruz has returned to his more resistant posture that he frequently took during the Obama administration. In a statement to the Tribune, Cruz said he scrutinized each nominee on their qualifications, but also criticized the appearance of Biden pandering to the left wing of the Democratic Party through his nominations.

“President Biden is unwilling or unable to stand up to the radical left, and they’re running the show,” he said. “This is a boring but radical administration and the nominations we’ve seen reflect that radicalism.”

“I considered each nominee on their qualifications, and I believe the ones I voted against did not merit their appointments,” he added.

Lingering over Cruz’s approach is that he is considered a possible candidate for the 2024 presidency. His handling of the confirmation process resembles that of several senators who caucused as Democrats in 2017 and would eventually run for president in 2020. U.S. Sens. Kirsten Gillibrand, Bernie Sanders and Elizabeth Warren made a habit of voting against Trump nominees. That enabled them to take no political ownership of any of those future cabinet members while making their cases against Trump in the 2020 Democratic primary.

Cruz’s three votes to confirm were for Secretary of Defense Lloyd Austin, Cecilia Rouse, chair of the Council of Economic Advisers, which is charged with advising the president on economic policy, and U.S. Trade Representative Katherine Tai, who develops the country’s trade policy and negotiates trade agreements.

Perhaps the two senators’ most notable divergence was on the nomination of Merrick Garland, Biden’s attorney general. Garland was notably nominated to a vacant seat on the U.S. Supreme Court in 2016 after the death of Justice Antonin Scalia, but the Republican-controlled senate at the time blocked his nomination entirely.

Cornyn voted to confirm Garland based in part on his confidence that Garland will take an apolitical approach to running the Justice department.

“Merrick Garland has served with distinction in the Department of Justice for a long, long time before he became a judge. He’s got a good reputation as a judge,” Cornyn said in a conference call with reporters. “And I told him I had one criterion: I wanted to see politics excised from the Department of Justice, and I wanted to see the law enforced as Congress has written it and not pick favorites. And he said he agreed with that.”

Cruz didn’t express that same confidence in Garland, ultimately voting against his confirmation. He said in a news release that Garland “refused to make clear that he would stand against the politicization of the Department, which we saw during the Obama-Biden years.”

This prompted more charges of hypocrisy and disingenuousness against Cruz. Trump on multiple occasions attempted to use the Department of Justice for his personal or political benefit, such as when he asked for loyalty from the FBI director days into his presidency or when he reportedly plotted to install a loyalist as the acting attorney general who could fight to overturn the election results in his final days as president.

“It is nevertheless my hope [that] as the new attorney general, Merrick Garland will lead the Department of Justice with a commitment to integrity and fidelity to the rule of law,” Cruz said. “We have a real humanitarian crisis at our Southern border, one that has been created by the Biden administration’s radical, open borders agenda. I hope to see Judge Garland enforce all our laws fairly, including our immigration laws, and stop the crisis that is unfolding.”

The sharply-divided Senate has not rejected any of the 21 cabinet-level nominees that have faced a full Senate vote. There are no Texans serving in cabinet-level positions.

This article was originally posted on Ted Cruz has rejected most of Biden’s cabinet picks so far. John Cornyn has taken a different approach