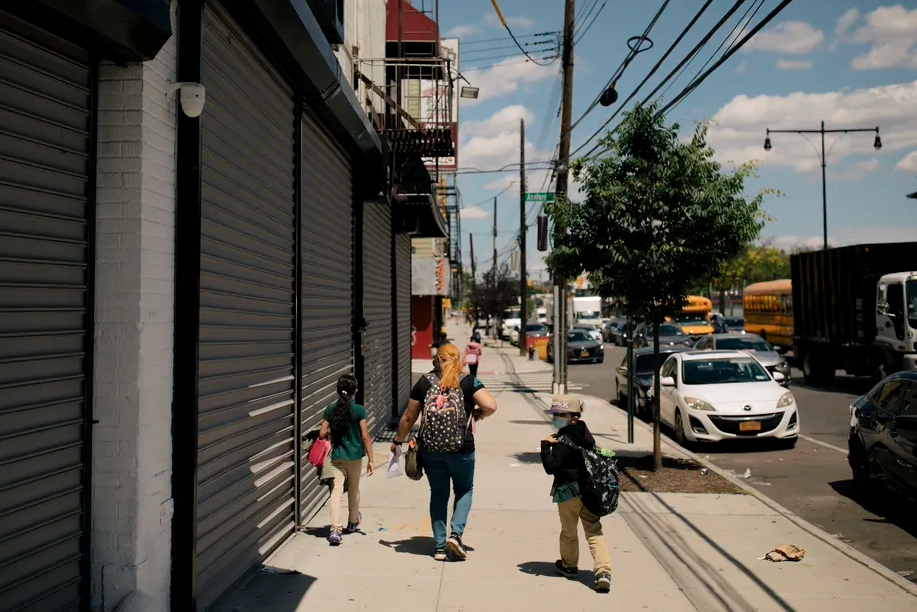 Thousands of students criss-cross the five boroughs each day on subways, buses, and ferries to get to schools that admit students from anywhere in the city.

Other high schools give priority to teens based on their home address — a system, many advocates believe, that has made it harder to integrate what is one of the nation’s most segregated school districts.

City officials had announced last December that they planned to end all “geographic screens” for students applying to high school this year, in an effort to make the admissions process more fair and classrooms more diverse. But this week Mayor Bill de Blasio said he is reconsidering the move, following an outcry from some corners of the city concerned about already overcrowded high schools and long commutes.

Time is ticking for him to make a decision: High schools are already hosting tours, and applications are typically due in the winter. An announcement would come “soon,” de Blasio said Friday.

“I understand parents are looking ahead to the next school year in September. But look, we’re trying to make sure that there’s opportunity for all,” he said on WNYC’s Brian Lehrer show. “We’re trying to break down some of the barriers of the past and have diverse high quality schools for everyone.”

But it’s not clear how simply ending geographic screens might impact school diversity, especially without explicit diversity goals to accompany any changes. Removing priorities based on where students live also doesn’t address other issues that advocates say drive segregation, such as the fact that many high schools “screen” students for admission based on their academic records.

‘You have to break their hearts’

Out of the city’s roughly 400 high schools, 235 base admissions on whether the student lives in the school’s borough, according to figures shared by the education department.

Another 27 have “zoned” admissions for some students, meaning a portion of seats are set aside for students who live within a certain boundary around the school. One high school, Queens Metropolitan in Forest Hills, gives all of its seats to students within its zone.

Because of admissions priorities, the eighth graders that Sindy Nuesi works with in Cypress Hills, a working-class, immigrant enclave in Brooklyn, are often cut off from high-performing high schools just across the border in Queens.

Often that entails telling students they don’t have a shot of getting into their dream school because of where they live.

“Sometimes you have to break their hearts,” she said. “A lot of schools don’t have the resources to provide the opportunities that they need.”

Dora Galacatos is the executive director of the Fordham Law School Feerick Center for Social Justice, which recently released a report calling for a number of reforms to make the admissions process more fair. She said that preserving geographic priorities would be “a tragic misstep” that keeps schools closed to some students.

“Even if you’re a good fit for that school, you’re not going to get in,” she said. ”Because there are going to be so many other people ahead of you… because of where they live.”

‘Holding on for dear life’

There isn’t much data at the high school level about the role that geographic screens play when it comes to student diversity. But research into the city’s elementary and middle schools shows that zones can often drive segregation, even in diverse neighborhoods.

Schools that have managed to hold onto their attendance zones are probably those with more politically savvy and connected parents, said Sean Corcoran, an associate professor of public policy and education at Vanderbilt University who has studied New York City’s high school system.

In 2005, when the city began to overhaul its high school admissions process, about 19% of students attended a zoned program, according to data analyzed by Corcoran. By 2018, the most recent year for which Corcoran had data readily available, the share shrunk to 10.4%. The numbers dipped as the city broke up large, struggling campuses and replaced them with smaller schools open to more students.

“The ones that weren’t done away with were probably holding on for dear life,” Corcoran said.

Queens remained home to about 47% of students admitted to zoned programs; 22% were from Staten Island, according to his analysis.

Next was District 26 in Queens, which spans the middle-class and affluent suburban-like areas of Bayside, Fresh Meadows, Jamaica Hills, and other neighborhoods in the farthest northeast corner of the city. It has the highest share of Asian students in the city, with nearly 54%, according to demographic data.

With a 92% graduation rate, the district boasts coveted high schools including Bayside, Benjamin N. Cardozo, and Francis Lewis. They are the kinds of schools that drive parents to buy or rent homes nearby.

In the swaths of the city where zones remain intact, such as Queens and Staten Island, overcrowding is often a problem, and transportation options can be limited. Some parents have argued the city should maintain geographic screens because they worry their children will be elbowed out of local schools and have long, far commutes.

Nancy Northrop, a parent leader in Queens, said the borough is already short thousands when it comes to relieving overcrowding and making room for every high schooler to live in the borough. Commuting to Manhattan from the outer reaches of the Queens could top three hours a day, she noted.

“The DOE’s plan to lift geographic priorities only exacerbates what is already an unconscionable situation,” she wrote in an email. “Queens gets nothing from this proposal (we are already the most diverse borough in NYC), but our students may bear a heavy burden.”

If current application patterns held steady and zones were lifted, student travel time would increase by less than a minute, according to an analysis by the education department. They did not answer questions about how the removal of borough priorities would affect commutes.

Some students are already traveling long distances to go to school, multiple studies have found. Black high school students have the longest commute times, at 34 minutes each way, according to an analysis by Corcoran. Students with higher test scores also travel longer distances. Students with the longest commutes hail from neighborhoods such as Soundview in the Bronx, Ozone Park in Queens, Canarsie in Brooklyn, and Bloomfield on Staten Island.

Students in the Bronx are most likely to apply to high schools beyond their borough, he also found.

But Northrop doesn’t think that having students take the subway to a school in another borough will necessarily help integration efforts.

“Build more high schools in Queens that bring together a more diverse population,” she said.“I’m not saying that diversity is not an issue. I’m saying that you need to solve that issue within Queens.”

Manhattan’s District 2 — which is disproportionately white and one of the wealthiest in the city — is home to coveted high schools that, until this year, were inaccessible to most students because of district priorities. After the city removed those priorities, District 2 saw its share of students from low-income families jump from 47 to 60%, according to the education department. (Citywide, roughly 72% of students are from low-income families.)

Nyah Berg, interim executive director of the nonprofit New York Appleseed, which advocates for school integration, said it wasn’t enough to just remove geographic priorities. In District 2, for example, many schools also expanded the number of seats offered through the city’s Diversity in Admissions program. That program gives admissions priority to students who are low-income, in temporary housing, or face other disadvantages.

At the Upper East Side’s Eleanor Roosevelt High School, one of the most sought-after schools in District 2, all of the seats dedicated to the diversity in admissions program were filled. That offers a lesson, Berg said.

“You have to match something —some sort of intentional integrative policy, like a diversity in admissions set asides — with the removal of these gatekeeping tools,” she said.

Removing the city’s remaining geographic zones for high schools may not result in dramatically different enrollment patterns if diverse groups of students don’t apply in the first place. Corcoran said that if schools aren’t easily accessible by transit, or aren’t well-known beyond the immediate neighborhood, enrollment may end up largely the same.

Either way, last-minute changes to the application process don’t help when it comes to trying to integrate schools, since information is often key to making sense of the system, said Karuna Patel, deputy director of the Feerick Center.

“It takes a lot of work, a lot of research for families to do this,” she said. “So it really throws a wrench into the time spent on the process for students and families to have these yo-yoing policies.”

This article was originally posted on The future of geographic screens for NYC’s high schools is up in the air amid concerns over diversity, commutes