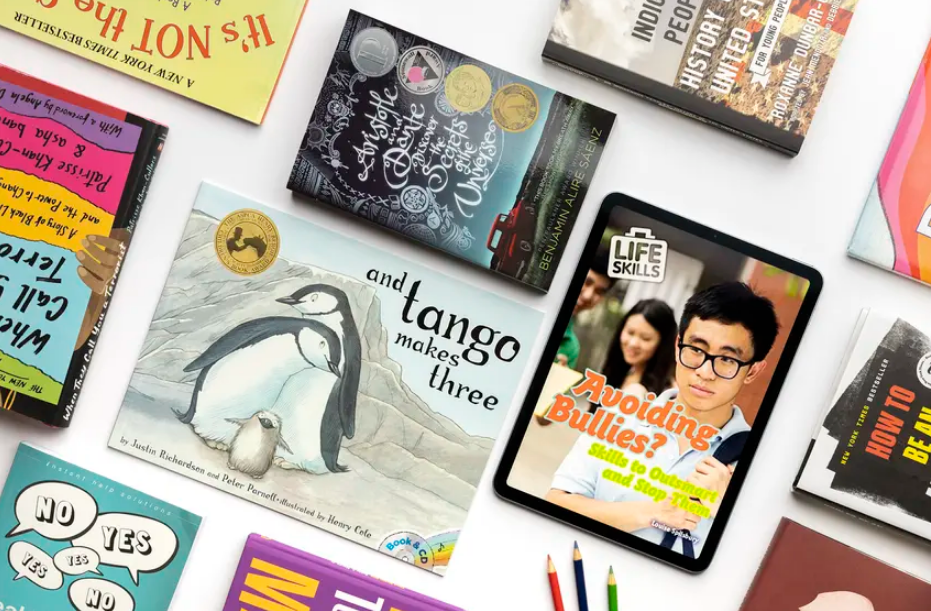 When Justin Richardson set out to write “And Tango Makes Three,” along with his now-husband Peter Parnell, his goal was to create a simple story. He and Parnell gleaned inspiration from a New York Times article that chronicled the story of two male penguins, Roy and Silo, who together take care of a fertile egg that’s set to hatch.

But along with its release in 2005 came pushback and repeated attempts to remove it from library shelves. More than 15 years later, the book keeps getting flagged.

“And Tango Makes Three” is one of nearly 850 works at the center of an investigation spearheaded by state Rep. Matt Krause, R-Fort Worth, into the type of books that Texas school districts keep in their libraries and classrooms.

It’s still unclear how Krause, who’s running for state attorney general, selected the books on the list or what he intends to do with the findings of his investigation, but his inquiry comes as educators across the state scramble to implement new limits that lawmakers approved this year on how issues related to race and American history are taught in schools. It’s part of an effort by conservatives to weed out “critical race theory,” which is an academic discipline that looks at racial inequities on a systemic level, but experts and teachers have said the approach is not being taught in K-12 schools.

Other politicians in Texas, including Gov. Greg Abbott, have also recently taken an interest in the content of books found in school libraries, recently targeting the nonfiction book “Gender Queer: A Memoir” by Maia Kobabe. On Wednesday, Abbott called for a criminal investigation to see whether students have access to “pornographic books” in Texas public schools.

Krause’s list has sparked criticism for the titles it focuses on. It includes several books on topics such as race, sexuality and puberty, and most of them were written by women, people of color and LGBTQ writers, according to analyses by the Dallas Morning News and the editorial book site Book Riot. Some authors whose works appear on Krause’s list say he’s targeting literature specifically created for children and young adults that helps them feel understood and broadens their worldview. On Twitter, users have latched on to the hashtag “#FReadom,” uplifting some of the titles included on the list.

Titles range from picture books like “I am Jazz” by Jessica Herthel and Jazz Jennings to popular young adult novels such as “Me and Earl and the Dying Girl” by Jesse Andrews. Books that could show up on a college syllabus also made the list, including “Hood Feminism: Notes from the Women that a Movement Forgot” by Mikki Kendall and “The New Jim Crow: Mass Incarceration in the Age of Colorblindness” by Michelle Alexander. Two works from the American Library Association’s Top 10 list of Most Challenged Books of 2020 are also on Krause’s list — “George” by Alex Gino and “All American Boys” by Brendan Kiely and Jason Reynolds.

To get a better idea of what kind of books are included on Krause’s list, The Texas Tribune chose three titles — a children’s book, a young adult novel and a self-help book — to examine their themes and content. The selection is not meant to be representative of the entire list but is based on the variety of their content, length and recommended age level.

Based on true events, “And Tango Makes Three” tells the story of Roy and Silo, two male chinstrap penguins at the Central Park Zoo in New York City who are a couple and become parents to a baby penguin named Tango.

In the book, Roy and Silo engage in the same mating routines as opposite-sex penguin couples: They sing together, swim together and create a nest to sleep. After the two attempt to nest a rock in hopes that it will hatch, a zookeeper comes up with the idea to let Roy and Silo nest a real egg that needs care.

After taking turns caring for the egg and keeping it warm, it finally hatched and the two penguins became fathers.

Throughout the book, readers are exposed to the recurring theme that family and love can exist in different forms. Each page contains illustrations and short text written in the third person, making it easy for young readers to follow along.

Richardson, one of the book’s authors who has worked as an educator and psychiatrist, said prior to writing the book, he had come across parents who were searching for age-appropriate ways to talk to their children about same-sex relationships. So he and Parnell worked to craft a story in a “language that kids can understand.”

“It’s a classic structure. It’s like ‘The Little Engine That Could’ or any of those children’s books that have a character who seems a bit of an underdog and who can achieve their dream,” Richardson said.

In response to Krause’s list, Richardson said even if Krause doesn’t specifically intend to have the books on his list removed from schools, the mere act of compiling such a list can have chilling effects.

“This is clearly an escalation,” Richardson said. “And it’s quite concerning. It’s especially concerning to think that our children and their access to books that represent them are now the target of an active political theater.”

“Avoiding Bullies?: Skills to Outsmart and Stop Them”

This book is a quick guide that teaches kids and teens how to identify bullying and its different forms.

The book identifies different types of bullying: verbal, relationship or social, cyberbullying and physical bullying. It also homes in on prejudice and the possibility that some bullies may target “people who are more obviously different from themselves.”

Prejudice is further explored in the book as one section explains why some people become bullies and how their actions can affect victims of bullying.

Readers are also equipped with strategies on how to confront bullying such as talking with a teacher or parent. But while it points this out, the book also warns readers that sometimes authority figures themselves can be bullies.

“Aristotle and Dante Discover the Secrets of the Universe”

Set in El Paso during the late 1980s, “Aristotle and Dante Discover the Secrets of the Universe” tells the story of a blossoming friendship between teenagers Ari, a social recluse and the novel’s protagonist, and Dante, his charismatic best friend.

The book details their struggles as they come of age and traverse the close relationships in their life, particularly Ari’s relationship with his parents: his father, who’s a Vietnam War veteran, and his mother, who is a teacher and often empathetic toward Ari as he grapples with young adulthood. In the book, Sáenz delves into the dynamics of familial relationships and romantic relationships as Ari and Dante’s feelings for one another deepen.

Throughout the book, readers see Ari try to deal with the intricacies of being a teenage boy along with his anger at his parents — who refuse to talk about his brother, Bernardo, who went to prison when Ari was 4 years old — and at himself, as he struggles to admit he has feelings for Dante, who’s opened up to Ari about his attraction to boys.

In addition to exploring sexuality and masculinity, the book touches on race, ethnicity and what it means to be Mexican American.

The book contains some profanity, violence and nudity along with mentions of teenage drinking, sex and the trials of puberty, but there are no intimately explicit scenes.

At its core, the book is about love, family and learning to communicate one’s most vulnerable feelings. Benjamin Alire Sáenz, the book’s author, said it’s also about “belonging and accepting” and posing the question, “Why do we exile people?”

Regarding the book’s placement on Krause’s list, Sáenz said some politicians might feel the novel threatens the idea of what an American citizen is and looks like. But since its release in 2012 and despite some scrutiny over its content, Sáenz has seen people embrace Ari and Dante.