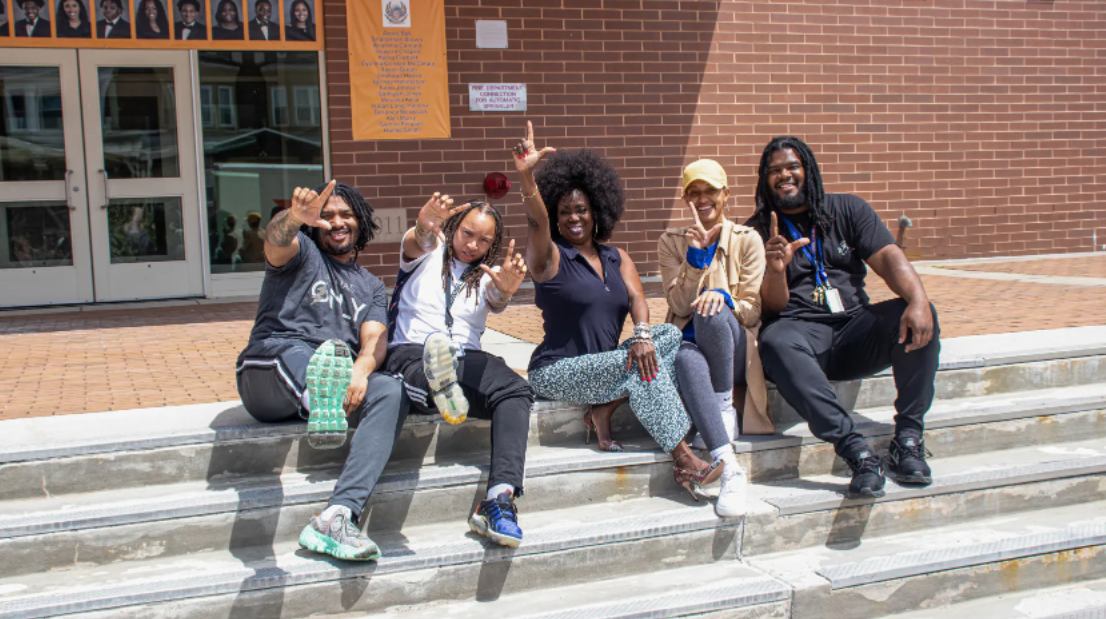 They are now on her staff, running classrooms of their own. But West Philadelphia High School Principal Marla Travis still refers to four of her teachers – Jean-Claude Forte, Yaseemah Foster, Robert Green, and Brittney Smith – as “my children.”

“They’re still little babies to me,” she said.

All four attended Lamberton School, in the Overbrook Park section of West Philadelphia, when Travis was principal there between 2003 and 2014. And all of them were, in part, inspired by her to enter teaching, at a time when the profession is suffering a shortage nationwide, and the proportion of Black teachers in particular is on the decline.

For much of its existence, Lamberton was a K-12 school, the only one in the state. The reason for this isn’t pretty: It was built in 1949 in the Overbrook Park neighborhood when the area was almost entirely white. As Black families started moving in, white parents successfully petitioned the school district to keep adding grades so its students wouldn’t have to enroll in the neighborhood’s diversifying junior high schools (later middle schools) and high schools, including Overbrook and West.

Travis is a second-generation principal. Her mother, Ella Travis, led Carver High School of Engineering and Science for many years, and was also the first Black woman assistant principal at Central after the city’s flagship magnet admitted girls beginning in 1983.

The four teachers gathered last week to talk about their journeys as educators and Travis’ effect on their lives.

Working for, and then emulating, their principal

Robert Green, 35, who teaches health and physical education, attended high school when Travis was principal of K-8, but his younger siblings were in the elementary school at the time.

And Travis was friends with Green’s father, a neighborhood barber, who died in 2009.

“Miss Marla, she influenced us as far as her power to connect people,” said Green, 35. After attending Lamberton, he studied communications and media studies in college, but “that didn’t work out” career-wise, he said. A friend got him interested in education as a career, and Travis recruited him to teach at West after he had a bad experience at a charter school.

The salary made sense, and her relationship with his father and his siblings made the offer still more attractive.

​​“Marla called me and said, ‘I want you under me,’” Green recalled. “I came right over, and I definitely made the right decision.”

Now he doesn’t just work for her. He’s emulating her. Green is pursuing his principal certification at Eastern University.

“Miss Marla told me, whatever happens to you in life, you can either sit and take it or fight back,” she said. “You can’t allow what happened to you in your past to define your future.”

Instead of giving up, she pursued her education. She now teaches dance at West and, like Green, is pursuing her principal certification from Eastern.

‘I couldn’t see myself doing anything else’

Foster, 28, mostly grew up in Philadelphia, but found herself avoiding some personal issues and staying away from the city. She lived in many places after graduating from college, including California and Pittsburgh, doing a variety of jobs, and thought she would become a personal trainer or a coach (she had majored in exercise science at Indiana University of Pennsylvania.)

But she decided to settle permanently in Philadelphia and become a teacher, largely due to Travis. “I never thought I’d be teaching in a classroom setting,” Foster said. “My aunt wanted me to be a school safety officer. Miss Marla said she thought I’d be a good teacher.”

She listened. Travis is “100% herself, authentic, real,” Foster said. “Granted, she gets paid, but she’s not here for money. She wants you to succeed in your personal life and your professional life.”

Travis has known Forte, 28, since he was a rambunctious kindergarten student at Lamberton. He and his first grade brother “used to hide under my desk,” she said.

“Why did we do that?” Forte asked Travis during their recent conversation.

“You don’t remember? Because you were scared,” she replied. “You were in my office every day. For hugs.”

When Forte was in eighth grade, he decided that year to stay home most days and joyride with a friend instead of attending school, actions he now admits were “kind of stupid.”

One day, Travis saw him on a joyride. She made him repeat the eighth grade.

“It was the most embarrassing thing in the world,” he said. His friends made fun of him for being “left back.” Since Lamberton at the time was a K-12 school, he was still in the building with others who had been promoted to ninth, adding to his mortification.

However, he said, being held accountable for his actions turned out to be a blessing. “I was never mad at her,” he said. “I felt she did what she had to do. And the crazy thing was, I learned hard lessons. I learned that decisions had consequences behind it. It made me want to be successful.”

All in all, he concluded, “Growing up in Lamberton was pretty dope.”

He buckled down and ultimately got a basketball scholarship to attend Lackawanna College, where he majored in sports management.

After graduating, Forte was working in an automotive shop when his brother, who had a job in a nearby school as a climate specialist charged with enforcing discipline, suggested he apply for that position. He did so, got the job, and was assigned to Lamberton, where Travis immediately “reeled him in.”

“She offered me the opportunity to teach and I said, ‘heck, yeah,’” he recalled.

He subsequently went to Neumann University for his education credentials, and now teaches African American history. He is about to transition to physical education, which fits with his sports management degree. His commitment to the job extends beyond his classes: The day before catching up with Travis, Forte had stayed late to help a student who was having a meltdown.

“A lot of the kids here, I can relate to them. A lot don’t understand what they’re doing. I see a lot of me in them,” Forte said.

Travis isn’t just proud of these four teachers because they’re her former students. She believes they are “making a true impact” on the students she’s in charge of today.

“These children need a special type of person to be before them every day,” Travis said, adding that her students-turned-teachers “are doing what I did with them … it’s very rewarding to see the passion they have for our children. I’ve seen them make a difference.”