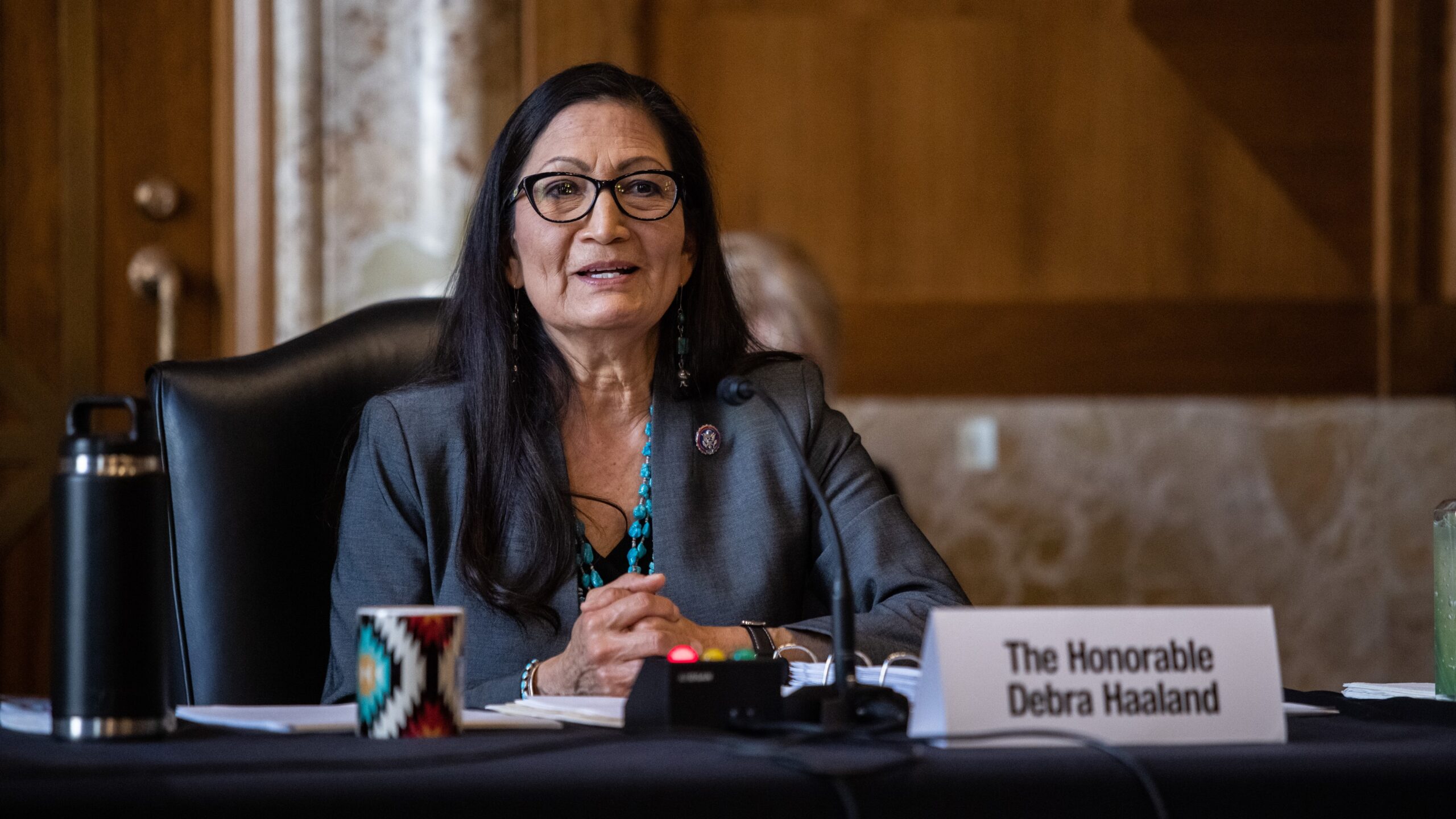 In U.S. Rep. Deb Haaland’s opening remarks during her confirmation hearing for Secretary of the Interior, she noted that she has a “unique” story.

“Although today I serve as a member of Congress and was the vice chair of the House Natural Resources Committee, if confirmed, I would be the first Native American to serve as cabinet secretary,” she said in her opening remarks. “This historic nature of my confirmation is not lost on me, but I will say it’s not about me.”

Haaland is an enrolled member of the Laguna Pueblo and when first elected in 2018, became one of the first two Native American women in the U.S. House of Representatives, along with Sharice Davids, a Democrat from Kansas, who was elected in the same year.

Haaland is a staunch progressive and has advocated for stronger environmental protections, including on public lands and related to oil and gas exploration.

She also vowed to “listen and work with members of Congress on both sides of the aisle” if confirmed.

Included in this was an introduction from Republican U.S. Rep. Don Young of Alaska, who referred to Haaland as his friend and said that if confirmed, she would be a voice in the cabinet that would listen to all perspectives.

But from there, she faced questions and criticism over her stances on oil and gas exploration and some past tweets criticizing Republicans.

This is one reason why the confirmation hearing in the Senate Energy and Natural Resources Committee was more contentious than many earlier hearings held for cabinet nominees put forward by President Joe Biden.

Wyoming U.S. Senator John Barasso said climate and energy positions taken by Haaland are “views that many in my home state of Wyoming would consider as radical.”

He also targeted a tweet from last year which Haaland said during the debate between then-Vice President Mike Pence and Kamala Harris that Republicans don’t believe in science.

A key ally on the committee was U.S. Sen. Martin Heinrich, in his second term as a U.S. Senator from New Mexico and his first session sitting on the committee. He also previously represented the same 1st Congressional District seat that Halland currently holds.

“Of all the members of Congress newly elected in 2018, she introduced the most bills with bipartisan co-sponsors,” Heinrich said. “I have no doubt that Congresswoman Haaland’s bipartisan experience and her leadership will help us restore our nation-to-nation relationship to Indian Country, and make conservation and outdoor recreation a key part of our national economic recovery.”

Heinrich also said that Haaland “understands that confronting the climate crisis, not denying it, and transforming our economy will not come without costs and tradeoffs.”

Republican Steve Daines of Montana also said he was “concerned” about Haaland’s positions on addressing the impacts of climate change and on extractive industries in general. Daines previously signaled he intends to block Haaland’s nomination.

Haaland acknowledged that she traveled to attend protests against the Dakota Access Pipeline project, which would largely transport Canadian oil through the United States—including through Native American land.

North Dakota Sen. John Hoeven, also a Republican, asked her about her position on DAPL.

Haaalnd framed it as an issue over tribal consultation.

“I did go to stand with the water protectors during that — several years back,” Haaland said. “The reason I did that is because I agreed with the tribe that they felt they weren’t consulted in the best way. I know that tribal consultation is important, and that was the reason that I was there.”

She said that she would consult Interior Department attorneys on whether or not she would need to recuse herself from decisions on the project.

A key name on the panel—and in the Senate in general—is West Virginia U.S. Sen. Joe Manchin, the chairman of the committee and the most conservative Democrat in the caucus. With an evenly divided Senate, his opposition could doom a nominee, as it may have with Neera Tanden, Biden’s choice to lead the Office of Management and Budget. Manchin cited the need for bipartisanship as a reason to vote against Tanden, who has a history of targeting Republicans (and also those to her left politically) on her Twitter account.

Manchin said at the beginning of the hearing that he “always believed that the president should be given wide latitude” in the composition of their cabinet.

“But I also take the Senate’s constitutional obligation to advise and consent to the President’s nomination seriously,” he said.

In response to a question from Manchin about “energy independence” for the United States, Haaland said that a transition to clean energy is “not going to happen overnight” and that the country would still rely on fossil fuels in the interim.

Another key vote will be Lisa Murkowski, a Republican from Alaska who has broken from the majority of her party on some issues, including voting to convict former President Donald Trump for his role in inciting the Jan. 6 U.S. Capitol insurrection by his supporters, including a number of far-right individuals and groups.

But Alaska is also a state that heavily relies on revenue from extractive industries.

Many Native Americans have rallied behind Haaland and spoke about what they consider a double-standard over her nomination compared to other nominees.

Before becoming a U.S. Representative, Haaland had unsuccessfully run for Lieutenant Governor on the ticket with Gary King in 2014. She also served as the chair of the Democratic Party of New Mexico.