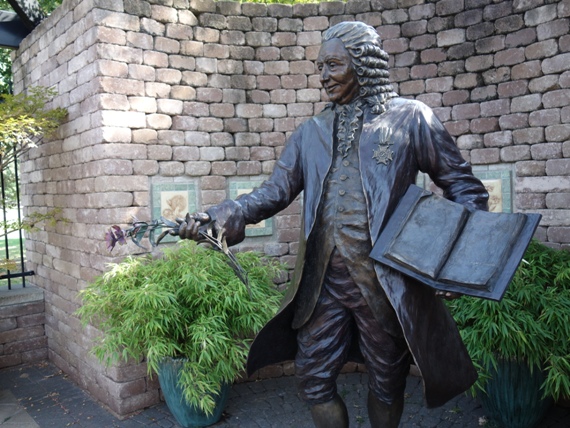 We are living through a period of cultural upheaval. Around the world, statues of iconic men who held racist beliefs and committed racial injustices are being ripped from their pedestals. The dull thud of metal bodies hitting concrete rings fresh in our ears, and many of us are still grappling with what these reverberations mean.

Statues of racists are monuments to the dregs of our society. Yet over time, their pedestals have crept so high that, for some people, it has become unthinkable that any scandal could justify their removal. Today, these memorialized men look down on us from high places that they do not deserve; the scandal is that society has for so long respected the inertia of their corrupting influence.

One such figure is the 18th century Swedish botanist Carl Linnaeus. He devised binomial nomenclature, the ubiquitous system now used to scientifically classify organisms by genus and species. He then used his nomenclature to classify humans by “variety,” ascribing inherently positive traits to lighter-skinned Europeans and negative traits to darker-skinned Africans and Asians, thereby laying a pseudoscientific foundation for racism that persists today. To some, this history may seem eclipsed by his scientific accolades, but others still feel the knee of his ideas on their necks.

Two years ago, Linnaeus’ stained legacy sparked a fiery debate among American entomologists — myself included — about the Entomological Society of America’s annual quiz competition, known as the Linnaean Games. The controversy, finally settled last month when the society agreed to change the competition’s name, revealed fault lines in a community caught between honoring tradition and embracing inclusiveness. Although the victory for moral progress was small and symbolic, it holds lessons for the broader conversation about how we celebrate the giants of science history.

Aside from Linnaeus’ general scientific notoriety, there was never much reason for the entomological society to name its trivia games after him. The competition occasionally features taxonomic questions, but, as some members pointed out, it could just as easily have been named something neutral. In 2018, members raised concerns over whether it was appropriate to honor Linnaeus, considering his legacy justifying and ultimately perpetuating racism.

The society responded by forming a task force to consider member feedback and, ultimately, make a recommendation on the name change. The ensuing discussion among members was passionate, with many adamantly wanting to uphold the tradition. They held Linnaeus and his discoveries in such high regard, it seemed, that only the most egregious transgression could justify the “dishonor” of removing his name. Many opposed the name change because they believed historical figures should not be judged by modern standards. It was as if any criticism of Linnaeus was also a criticism of the field he contributed to.

Last year, after conducting a survey and scrutinizing members’ concerns, the task force recommended against changing the name of the contest. They noted, among other things, that the majority of respondents preferred to keep the name. It is noteworthy, however, that the majority of respondents were also White: Entomology is not immune to the same lack of diversity found throughout the science, technology, engineering, and math disciplines.

Two months ago, however, the tide turned. Amid a burgeoning national anti-racist movement, several entomology graduate students decided the time was ripe to revisit the issue of the Linnaean Games. They wrote an open letter and started a petition to the Entomological Society of America explicitly demanding that the society rename the trivia competition. Tensions were already high from a global pandemic and countrywide protests against institutional racism. The ensuing debate at times devolved into a discussion of whether science should be politically correct — as if there was a trade-off between conducting science and not offending people.

Ultimately, the governing board of the Entomological Society of America decided to reverse its earlier decision and rename the competition the Entomology Games. In his letter announcing the decision, the current president of the Society, Dr. Alvin M. Simmons, provided this stirring rationale: “A name can be replaced, but each entomologist brings a unique and valuable contribution to our Society that is irreplaceable”.

The Society finally got it right. There are many benefits to cultural traditions, but the traditions we bring with us into the future should be able to withstand modern scrutiny. How can we foster an inclusive field when we continue to honor someone who divided us into subspecies? Trivial as it may seem, the decision to sever a quiz competition’s ties to a purveyor of racist ideas recognizes that who we choose to honor is a reflection of our values.

The accomplishments of scientists are often used to justify their lionization. But holding a scientific figure — a fallible person just like anyone else — above reproach is troubling in and of itself. Not only does it potentially create moral conflicts, it ignores the incremental nature of science. Brilliant as history’s revered scientists may have been, there is no discovery for which these individuals, mostly men, were indispensable. It is far better to celebrate the finding or the idea, rather than the person behind it.

Science is crippled without compassion. For far too long, science has been hobbling along carrying the myriad biases of the people who practice it. How much progress has been delayed because scientific pursuits were unavailable to all but a select few? How many scientific discoveries were forgotten to history, simply because they were made outside of mainstream Western culture?

Science is, at its core, a creative process conceived and supported by communities of people. It is our responsibility as scientists to examine our communities, including their traditions, and set standards that fit our shared vision for the future. Oftentimes, achieving this vision requires us to deviate from the status quo. This process, though it may expose our demons, is the mark of a healthy community.

Surely, the dust-up over the Linnaean Games will not be the last clash between tradition and progress in the scientific community. More controversies will arise as anti-racist activism gains strength. But by demanding that the scientific community include more perspectives and bring more talented scientists into its ranks, the anti-racism movement is making science more just and, as a direct result, stronger.

Brian Lovett is a postdoctoral researcher at the Division of Plant and Soil Sciences at West Virginia University working on fungal biology and biotechnology. He has contributed to the advancement of transgenic mosquito-killing fungi for malaria prevention.

This article was originally published on Undark. Read the original article.