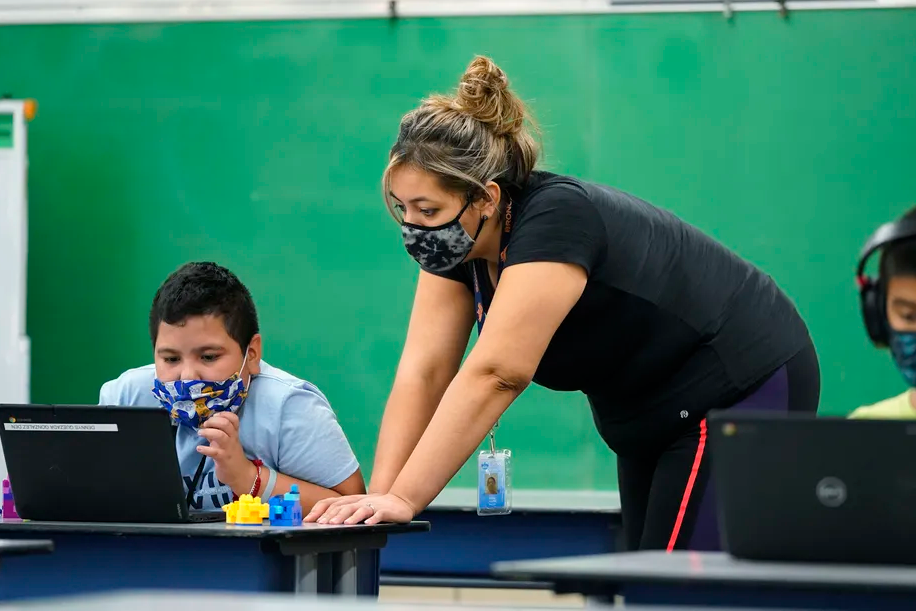 School and child care personnel in Denver will be required to be fully vaccinated against COVID-19 by Sept. 30, Denver Mayor Michael Hancock announced Monday.

Hancock’s order applies to staff at all schools within the city of Denver, including public schools, private schools, colleges, and universities, said City Attorney Kristin Bronson.

To be fully vaccinated by Sept. 30, employees will need to receive their final doses of the vaccine by Sept. 15. Employees who don’t comply “will not be permitted to work onsite or in the field,” according to a press release from the mayor’s office.

“There are consequences for not following the order,” Hancock said at a press conference Monday. “This would not be an order if you didn’t have the consequences and be willing to follow through with them. There might be some folks who may lose their jobs behind this.”

Rob Gould, president of the Denver Classroom Teachers Association, said the teachers union has encouraged members to get vaccinated, but union leaders were unaware of the plan to impose a requirement.

“With respect to Mayor Hancock’s decision to mandate vaccinations for city and county employees and Denver educators, this has come as an absolute surprise to us,” he said in an email statement. “As we have the expectation for the district to collaborate with educators in the decision-making process, we have a mutual expectation that governmental officials collaborate with school districts before imposing mandates on their employees and community members.”

In an email to Denver parents, Superintendent Alex Marrero said the district was working with the city to implement the order and emphasized the safety of the vaccine. Employees can get medical or religious exemptions to the order, he said.

“We will work with every single one of our team members to make sure they have the support they need to meet the requirements of this new public health order,” Marrero wrote.

Aurora Public Schools said previously it would mandate the COVID vaccine for all staff on the condition that one of the vaccines receive full federal approval before the start of the school year.

Nationally, a growing list of public and private employers have mandated the vaccine, but Gov. Jared Polis has not required it for state employees. Unvaccinated state employees instead must undergo frequent COVID testing. New York City has taken a similar approach, with teachers required to either get vaccinated or do weekly tests.

Approximately 70% of Denver residents aged 12 and older are already fully vaccinated, according to city data. But the daily infection and positivity rates are ticking upward, and Hancock said the more infectious delta variant is now circulating in Denver.

Face masks are still not required in most settings in Denver, and Hancock’s vaccination order doesn’t change that. Instead, he and other city officials described vaccines as key.

Denver Public Schools is expected to release mask guidance for the fall this week. The first day of school for most Denver students is Aug. 23.

Gerie Grimes, president and CEO of the Hope Center, which enrolls toddlers and preschoolers, said the new mandate won’t affect her northeast Denver program much because nearly all of her 31 staff members are vaccinated.

She said some of her employees, many of whom are people of color, were initially hesitant to get the vaccine, in part because of the government’s past racism in medicine — letting syphilis in hundreds of Black men go unmentioned and untreated in the infamous Tuskegee Syphilis Experiment, for example.

Such episodes raise the question, “Can you trust the government with anything that they’re doing?” she said. “As an African-American, I know the history.”

But Grimes, who got vaccinated last winter, also said Hope Center has made an effort to educate staff members about the effectiveness of the vaccine and counter some narratives in the media that spotlighted rare instances of severe side effects.

She said if any employees decide not to get the vaccine by the mayor’s deadline, she’ll be hard-pressed to find qualified replacements because staff shortages are a major problem in the field.

“We’d be out there looking because we need those positions filled, but it would be tough,” she said.

This article was originally posted on All Denver teachers, other school staff must get vaccinated per new city order