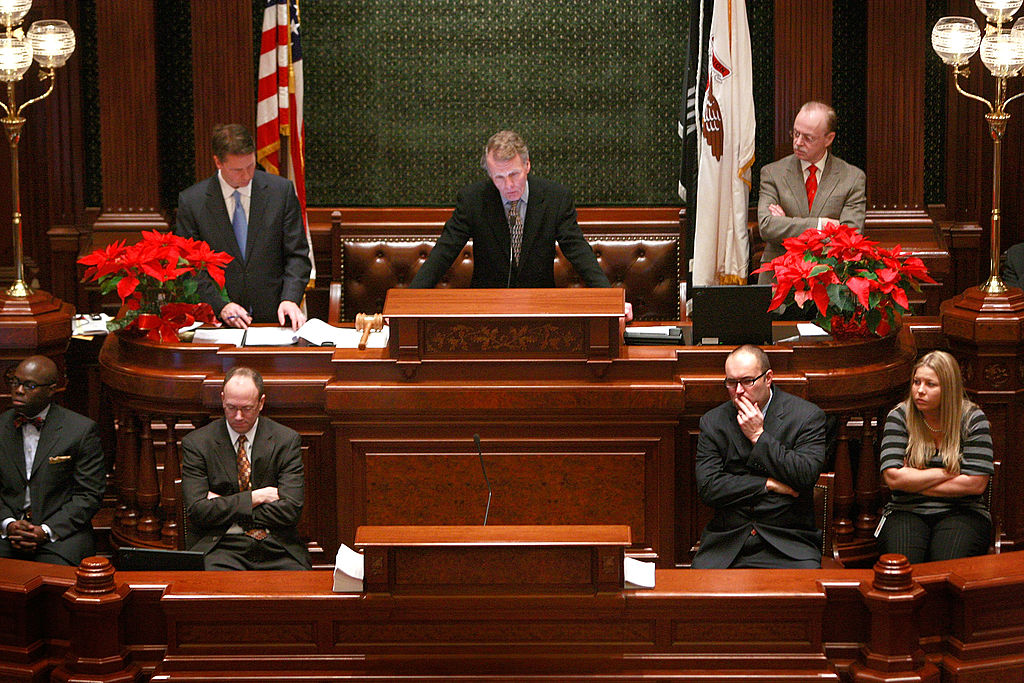 In a matter of weeks, Michael Madigan has given up the titles that have bestowed him historic political and legislative power over Illinois for decades.

Madigan announced Monday that he’s stepped down from his position as chairman of the Democratic Party of Illinois.

“Over the last two decades, we have elected a diverse array of Democrats across Illinois and helped send a hometown Chicago leader to the White House, turning Illinois into a Democratic stronghold in the Midwest,” Madigan said in a news release. “Together, we faced conservative extremism and stood up for working men and women.”

The former chairman said he is confident Illinois will remain a progressive stronghold in the Midwest.

“My work would not have been possible without the support of my family, Shirley, Lisa, Tiffany, Nicole and Andrew,” he said, adding, “I thank each of them for their unwavering love and support that has allowed me to do this work for so long.”

Cook County Clerk Karen Yarborough, currently vice-chair, will serve as interim director until the party’s central committee can meet and choose a replacement.

“One thing everyone knows about Illinois is that it’s a reliably blue state in the Midwest and throughout the country, and that’s in large part because of the leadership of Mike Madigan,” Yarbrough said. “Democrats across Illinois owe Chairman Madigan a huge debt of gratitude for the support, resources and time he’s dedicated to candidates and races at every level.”

Madigan leaves his post as party head largely victorious, with Democrats in control of all statewide offices, all but five of the state’s 18 congressional seats, and comfortable supermajorities in both chambers of the General Assembly.

Despite his wins, Madigan leaves under a cloud of scrutiny involving questions about his possible involvement in an admitted patronage scheme by Commonwealth Edison officials aiming to curry favor with the powerful politician.

ComEd agreed to pay a $200 million fine after signing a deferred prosecution agreement with federal prosecutors last summer. In the agreement, ComEd admitted that officials with the company paid $1.3 million in jobs and contracts to Madigan associates in an effort to influence the speaker.

Madigan has not been charged with a crime and denies wrongdoing.

Also during Madigan’s tenure, the state’s credit rating plummeted to near junk status, worst in the nation, with ballooning legacy pension debt and unbalanced budgets.

His decision also comes as a University of Illinois at Chicago report found the state is the second most corrupt in the U.S.

“The statistics do not completely reflect it, but 2019 was a highly explosive year, during which some of the most important political corruption in the history of Chicago and Illinois was exposed,” UIC researchers said. “Bombshell corruption news reports that year dethroned the city’s most powerful alderman, upset Chicago’s mayoral election campaign, torpedoed the most powerful and well-known candidate, and threatened the political existence of Speaker of the Illinois House of Representatives and Chairman of the State Democratic Party, Michael Madigan.”

This article was originally posted on Amid federal corruption probe, Michael Madigan steps down as head of Illinois Democratic Party days after resigning legislative seat