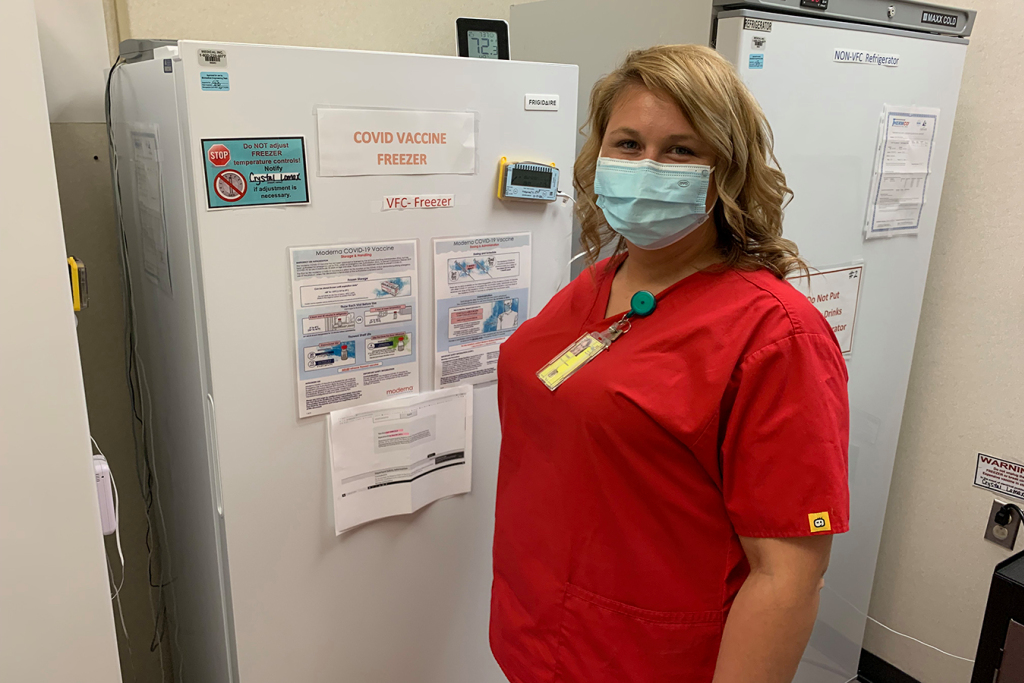 July Fourth was not the celebration President Joe Biden had hoped for, as far as protecting more Americans with a coronavirus vaccine. The nation fell just short of the White House’s goal to give at least a first dose to 70% of adults by Independence Day. By that day, 67% of adult Americans had gotten either the first shot of the Moderna or Pfizer-BioNTech vaccine, or the one-shot Johnson & Johnson vaccine. If children ages 12-17, who are now eligible for the Pfizer product, are included, the national percentage of those who have gotten at least one shot is 64%.

Drilling down from national rates, the picture varies widely at the regional level, and from state to state. For example, Massachusetts and most states in the Northeast reached or exceeded 70% (for adults, age 18 and older) in June. Tennessee and most Southern states have vaccination rates between 50% and 60%, and administration rates are slowing down.

Local variations in demand for the vaccines and in-state strategies for marketing and distributing the shots help explain the range.

In Massachusetts, for example, residents overwhelmed phone lines and appointment websites as soon as vaccines became available. The state began opening mass vaccination sites in January to meet demand. At Gillette Stadium in Foxborough, the home field of the New England Patriots, Jumbotron screens flashed updates and speakers blasted instructions to people arriving for a shot. When demand peaked in March, as many as 8,000 residents a day snaked through lines to a waiting syringe. Registered nurse Francesca Trombino delivered jab after jab at Fenway Park and then at the Hynes Convention Center in Boston for five months.

“I still hold a lot of interactions very dear to my heart,” she said, reflecting on those months in late June. “I had so many people cry, just out of pure shock, just being able to feel free.”

Heading into the long Fourth of July weekend, more than 82% of Massachusetts adults had received at least one shot. That number doesn’t surprise many public health experts because residents generally have embraced vaccination recommendations in the past, and Massachusetts regularly registers some of the highest rates for pediatric and influenza inoculations in the country. In Tennessee, where only 52% of adults are at least partially vaccinated against covid, nurses sit waiting. In some of the state’s rural counties, only 30% of residents have been vaccinated.

“Our first couple weeks we had people booked, then after that we had people start no-showing,” said Kirstie Allen, who coordinates covid vaccinations at the federally subsidized clinic in Linden, Tennessee. “We had a waiting list, the people on the waiting list didn’t want to come. It’s gradually just gotten worse.”

Allen is down to offering the vaccine just one day a week, and she aims to sign up at least 10 patients to avoid wasting doses in the multi-use Moderna vial.

Allen has witnessed plenty of vague skepticism in her town of 1,200 people. And she can sympathize. Despite administering the shots, the mother and licensed practical nurse has not yet been vaccinated and said she’s waiting for more research results to be released, and to see how everyone does over time.

“I’m one of those people who are unsure at the moment about getting it,” she said, adding she wouldn’t get her kids vaccinated yet either.

This wait-and-see attitude is especially common among white, rural conservatives in the South, according to many surveys in recent months. After an initial surge of interest, demand for vaccinations waned, and states like Tennessee held mass vaccination events only in the most densely populated cities.

In Massachusetts, with fewer than 20% of adults still unvaccinated, the state is closing its high-volume vaccine clinics and focusing on specific demographic groups and communities with low vaccination rates.

“As these [big] sites come to their mission complete, we need to keep pushing harder into the neighborhoods,” said Rodrigo Martinez, “into those locations that really need it.”

Martinez is with CIC Health, a company that moved from managing mass vaccination sites to running small outdoor clinics at supermarkets where shoppers who got a shot received a $25 gift card. That hyperlocal approach is part of a growing effort in Massachusetts to bring vaccines to residents, especially those in low-income and minority communities where the virus spread quickly and vaccination rates remain low.

Massachusetts has targeted 20 such cities including Brockton, south of Boston. It’s a diverse city of essential workers, a group that has been hit hard during the pandemic. First-dose vaccination rates are especially low for Latinos, at 39%, and Blacks, 41% (for all ages, not just adults).

The hyperlocal approach was on display in Brockton on a Sunday in late June, when the city, with assistance from the state, hosted a mobile vaccine clinic at a popular park. A big, yellow touring bus, retrofitted to hold vaccination stations, idled near tents offering free food, music, legal advice for immigrants and health insurance enrollment assistance.

“Bienvenue! Welcome!” shouted Isabel Lopez, a state-funded vaccine ambassador, as she moved from one cluster of families to another, urging them to go grab a free hamburger, hot dog — and a vaccine.

“We are here, bringing the communities together, to make this a fun day and also a creative way to get people vaccinated,” Lopez said.

Near the soccer field, Lopez scored a big win. She persuaded five hesitant members of one household to go to the bus and at least talk with a nurse there. A half-hour later, all five had received their first shots. Lenin Gomez said afterward that he had had doubts about the vaccine but was persuaded when the nurse stressed the need to protect the children living in Gomez’s home.

“If I’m not fully protected, who will take care of the little ones?” Gomez said. “That’s what opened my mind to getting vaccinated.”

When Gomez gets his second dose in a few weeks, he can enter himself in a statewide lottery that will give away five $1 million prizes for anyone who’s vaccinated. Massachusetts Gov. Charlie Baker said he hopes these jackpots will entice hesitant residents to roll up their sleeves.

Hefty Financial Incentives Are Less Common in the South

In the states that need most to boost vaccination rates, there’s little interest in creative financial incentives. Tennessee has no plans. In Alabama, the NAACP funded a recent drawing for $1,000 prizes aimed at millennials and Gen Zers.

Overall, the daily vaccination rate across the South has slowed, worrying health officials who are watching the explosive growth and spread of the delta variant in several parts of the U.S. But some Southern residents continue to come around to the idea. In Lobelville, Tennessee, 57-year-old Laurel Grant was initially hesitant to get the shot because of possible side effects.

“But everybody I know has done real good, just maybe a little fever or a little tiredness,” she said.

So Grant got her own shot in June, at a local pharmacy. It helped that the Pilot Flying J truck stop where she works offered a $75 bonus to employees who got fully vaccinated.

Converts like Grant are being seen as the best kind of evangelist for this next phase of vaccinating latecomers. Tennessee’s health department has started taping video testimonials to release online. But the marketing efforts are beginning to annoy some Republican state lawmakers convinced the state is trying too hard. They’re especially concerned about kids.

“It’s not your business to target children. It’s your business to inform the parent that their child is eligible for the vaccination,” she told health department officials at the hearing in June. “So I would encourage you, before our next meeting, to get things like this off your website.”

This criticism was mostly directed at the state’s health commissioner, Dr. Lisa Piercey, who responded at the hearing by saying the state is not “whispering to kids” or trying to get them vaccinated behind the backs of their parents. She said she’s not going to back off when it comes to vaccination outreach.

Piercey also said she doesn’t think the risk level in Tennessee is as dire as the low vaccination rates suggest. Tennessee had a huge surge of covid cases during the winter. That means at least 850,000 people — based on positive test results — are walking around with some level of natural immunity. Piercey said those residents are partially compensating for low vaccination rates.

“Yes, I want everybody who wants a vaccine to get it,” she said. “But what I really want at the end of the day is for this pandemic to go away. I want to minimize cases and eliminate hospitalizations and deaths, and we’re pretty close to getting there.”

The outlook is less rosy in neighboring Arkansas. The state escaped the worst of the winter outbreaks. Now it is trying to stop flare-ups of illness caused by the more contagious delta variant. Gov. Asa Hutchinson told CBS’s “Face the Nation” that if nothing else will inspire Southerners to get vaccinated, “reality will.”

This article was originally posted on As Covid Vaccinations Slow, Parts of the US Remain Far Behind 70% Goal