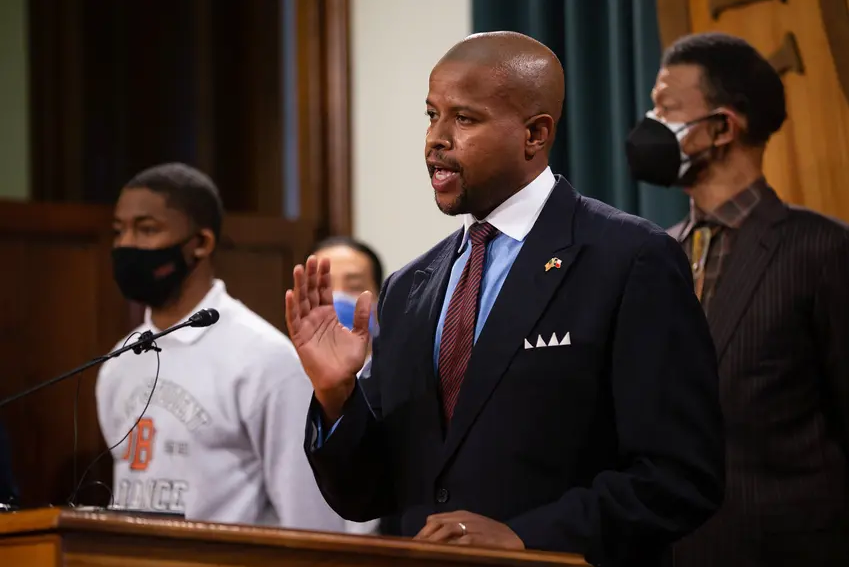 Members of Texas’ Legislative Black Caucus have joined the fight to rid the University of Texas at Austin of its alma mater song, “The Eyes of Texas” — with several members bringing their case directly to President Jay Hartzell on the issue, a state lawmaker said Monday.

State Rep. Ron Reynolds, D-Missouri City, was joined at the Texas Capitol by religious leaders, state and local NAACP chapter presidents, and UT-Austin students for a press conference to condemn the university for its decision to keep the song. The group took issue with a recent university commissioned report that found the song was likely performed in blackface when it premiered in 1903, but ultimately concluded that the song was not “overtly racist.”

“According to the committee report, they believe they can redefine what the song stands for by acknowledging its history,” said Anthony Collier, student body president at the University of Texas School of Law. “You can’t redefine racism. Acknowledging racism is fine, but it’s far from sufficient. It’s not enough to acknowledge racism. We must abolish racism.”

The song has become a dividing line between the UT-Austin community since last summer, when students and a group of athletes released a list of demands in the wake of the death of George Floyd. Among the demands was a call for UT-Austin to discontinue singing the song because it premiered at a university minstrel show where students likely wore blackface and performed skits that perpetuated racist stereotypes of Black people.

Reynolds said the Black caucus is “unequivocal” about its opposition to the song and has urged Hartzell to continue to meet with students who have made other demands to improve racial equality on campus.

“We were very deliberate, and [Hartzell] was very forthright and honest and said that, ‘Hey, you gave me some more things to think about,” Reynolds said. “We agreed that we will continue the dialogue.”

The university did not respond to a request for comment.

Earlier this month, UT-Austin released a report from a commission of professors, students, student-athletes and others that concluded there was “no racist intent” behind the song, even as the song was written in a racist setting.

Those at the press conference Monday said the links to extremely offensive minstrel shows should be enough to stop the university from singing the song.

“It’s humiliating to be required to sit for the song or be in the presence,” said Gary Bledsoe, president of the Texas NAACP. “It’s not whether you have to sing or not, it’s humiliation that requires you to be there while others stand and sing and pay homage or honor to a racist song.”

Last summer, UT-Austin student government and the senate of college councils spoke out against the song and called on the university to stop singing it. Students have also called on the school to stop playing the song from the bell tower.

“What was made abundantly clear to me and in my discussions with other members of the Black community was it felt very much so that the university was gaslighting us to believe the song was somehow acceptable,” said junior Judson Hayden, who is also a member of the Longhorn band. “For months the university said, ‘We’re going to view this from a third-party lens.’ … But that’s not what happened. In my opinion, they cherry-picked information and had evidence to support a narrative they already wrote.”

Last week, another UT-Austin history professor released his own report examining the song’s history, offering a different interpretation. In his report, Alberto Martinez provided documentation linking the phrase “The Eyes of Texas” to a statement made in reference to Confederate Gen. Robert E. Lee. The statement came from Confederate Gen. John Gregg, who said, “The eyes of Gen. Lee are upon you.”

The university’s report mentions the same connection, but said it could not find primary documents that specifically tied the phrase to Lee during his time as president of Washington and Lee University, though it has long been believed that Lee was part of the song’s origin story. The report concluded the song was not “overtly racist.”

“However, it is similarly clear that the cultural milieu that produced it was,” the report stated. “And the fact that the song was, for decades, sung and revered on a segregated campus has, understandably, blurred the lines between intent and historical and contemporary impact. This complicates its understanding and explains how different people experienced the song in vastly different ways.”

A UT-Austin spokesperson said the university stands behind its report.

Reynolds said Monday that he had spoken to Hartzell about Martinez’s report.

University officials previously said they would not force anyone, including athletes, to sing the song. Two players told The Texas Tribune that halfway through the fall season, they were told by athletic leaders they must stay on the field for the song because alumni and donors were angry the athletes had not remained on the field after previous games.

On Monday, a UT-Austin band member said said the implications of protesting the song were unclear for students.

“The university can say that, but will they protect the students who refuse to [participate]?” Hayden said. “If I personally go to the game and my instrument is not at my face, what are the implications for me? What is the university going to do to protect me? We still don’t know the answer to that.”

Hayden said there are members of the band who still oppose the song, and members continue to discuss plans for the upcoming fall semester, but no direction has been provided as to whether all band members will be required to play the song.

According to emails sent to Hartzell between June and October, the overwhelming majority of alumni who emailed pleaded with the university to keep the tradition they hold dear, and many disagreed that the song was racist. The rhetoric in those emails intensified as pleas to keep the song over the summer turned into frustration and calls for Hartzell to take a firmer approach. Many demanded students and players be required to participate in the university tradition.

This article was originally posted on Black lawmakers, NAACP and students push back on UT-Austin’s “The Eyes of Texas” report, urge school to lose the song