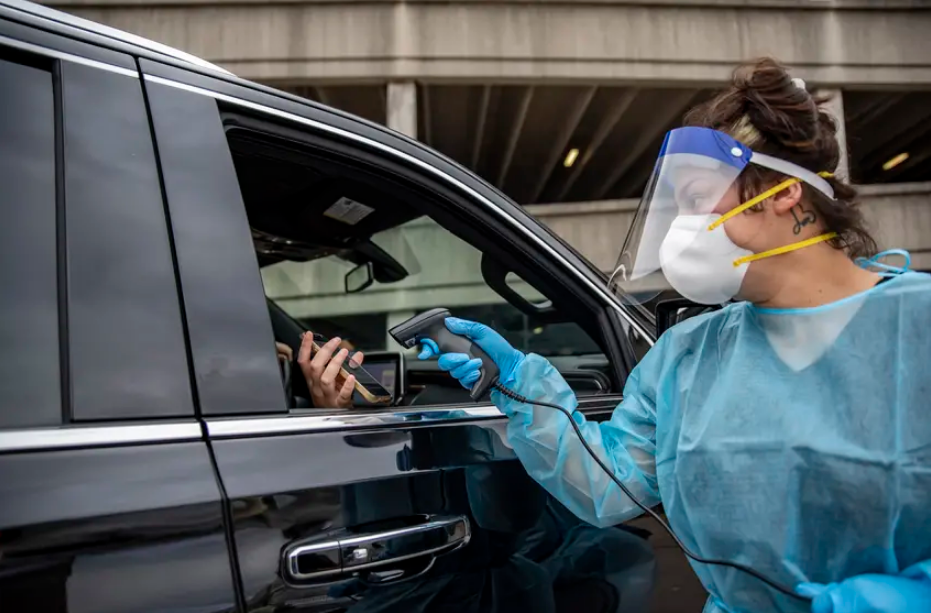 The number of Texans hospitalized each day with COVID-19 continued to rise over the New Year’s holiday, according to state health numbers released Monday, as the omicron variant continues to drive new cases and hospitals await desperately needed staffing help to respond to new admissions.

Health experts — and history — warn that the peak of the current surge in Texas is likely still ahead, as the highly contagious omicron variant of the virus rages through the state after Texans return from a season of gatherings and travel.

Millions of people are now vaccinated or have natural immunity, and there are more treatments available to keep people out of hospitals. The omicron variant is also thought to cause less severe illness in some cases, although the data on that is far from conclusive.

But the omicron variant, which doctors say appears to be as contagious as the measles, could wind up sending more people to the hospital than during previous surges — even if it is a milder version of the virus — simply due to the sheer volume of people it’s infecting, Dr. Jason Bowling, epidemiologist at University Health in San Antonio.

Omicron has become the dominant variant in the state less than a month after it was first detected. The delta variant took several months to become dominant in Texas. That means the state’s medical community could be in for a bumpy ride this month as the virus infects people at an unprecedented rate.

In Texas, the share of tests coming back positive in recent days has broken all previous pandemic records, according to state data.

On Monday, the state was given preliminary approval from the federal government for the opening of six federal testing sites across the state after a request Friday from Gov. Greg Abbott and state emergency management officials, said Lara Anton, spokesperson for the Texas Department of State Health Services.

Experts have said the surge in hospitalizations was expected because of holiday gatherings — and because the virus thrives in winter much like the flu and other respiratory illnesses. Omicron’s high rate of transmission means the numbers have climbed at an unusual speed. But delta would have caused a surge even if omicron had not been contributing to the positivity rates, a national expert said last week.

“We were going to see it surge this winter either way, whether omicron came into the country or not,” Dr. Paul Offit, director of the Vaccine Education Center at Children’s Hospital of Philadelphia, told NBC News.

That was never going to be good news for Texas hospitals, where having enough doctors and nurses on staff during this surge is the biggest challenge right now, said Carrie Williams, spokesperson for the Texas Hospital Association.

The state’s hospitals and clinics were struggling with staffing even before the current surge, which has not only brought more patients into emergency rooms and ICUs, but also knocked out more staffers who are experiencing symptoms or have received positive COVID test results.

“The primary issue is staff out sick,” Williams said. “Many others are in isolation or quarantine, are exhausted or had left to make more money with staffing agencies. We’re bracing for yet another impact with very limited manpower to handle it. We’re staying in close contact with the state on this issue and closely monitoring the statewide situation along with public health officials.”

Help is on the way through state-contracted staffing being brought in from other states, with some 3,900 staffers — mostly nurses — expected to land in regions across the state this week, Anton said. The state took similar action during last year’s winter and summer surges to bolster hospitals as they struggled to keep up with waves of seriously ill COVID-19 patients.

In the past week, Anton said, some 167 requests have come in from hospitals asking for nearly 5,500 staffers to fill gaps.

“We know that right now, a lot of them are in the process of traveling to the state and they’re going to be doing their onboarding and things like that over the next few days,” Anton said.

At University Health in San Antonio, where the COVID-19 patient population has tripled in the past two weeks, officials have asked the state to send nurses for the ICU, emergency room and medical-surgical departments, where most of the intake and treatment happens, said Tommye Austin, senior vice president and chief nurse executive at University Health.

“In almost all my departments, there’s at least one person who’s out with COVID-19 or their child has it or their spouse has it or someone has it to where they have to be the caregiver,” she said.

And even if hospital staff aren’t showing symptoms, testing positive still means they have to stay home for five days, leaving holes in the workforce.

“Some hospitals are seeing a number of vaccinated employees test positive for COVID,” said Stacy Wilson, president of Children’s Hospital Association of Texas. “It is likely that some hospitals will experience difficulty addressing higher patient demand because of staffing shortages before they find themselves short of physical beds.”

At Texas Children’s in Houston, where patients are tested for COVID-19 upon admission regardless of whether they are showing symptoms, the percentage of tests coming back positive is at an all-time high for the pandemic, said James Versalovic, pathologist-in-chief at Texas Children’s Hospital. Nearly all of them are the omicron variant, he said.

The hospital is able to handle the patients, Versalovic said, but “we certainly are seeing an impact on our workforce in terms of omicron infections in adults [staffers] and their families, too, their children and their parents. So it’s definitely having an impact. But we’re managing through it as we did during the delta surge.”

Medical experts expect that people who have been fully vaccinated and recently gotten a booster shot will still be much better protected from serious illness or death. The vast majority of patients hospitalized with COVID-19 are unvaccinated, hospital and county officials say.

Researchers are still trying to determine how severe omicron-related infections are for unvaccinated individuals or even the less recently vaccinated.

But the latest surge, which for parts of the state is the fifth wave of the pandemic, is renewing calls for vaccination and booster shots, the latter of which are now allowed for people ages 12 and up. Vaccines have been approved for emergency use in people ages 5 and up.

City and state health officials are encouraging Texans to get vaccinated, get boosted and step up the protocols they’ve become familiar with, such as masking in high-density places and testing or staying home when they feel ill.

“We’re just asking people to keep doing what they already know how to do,” Anton said.