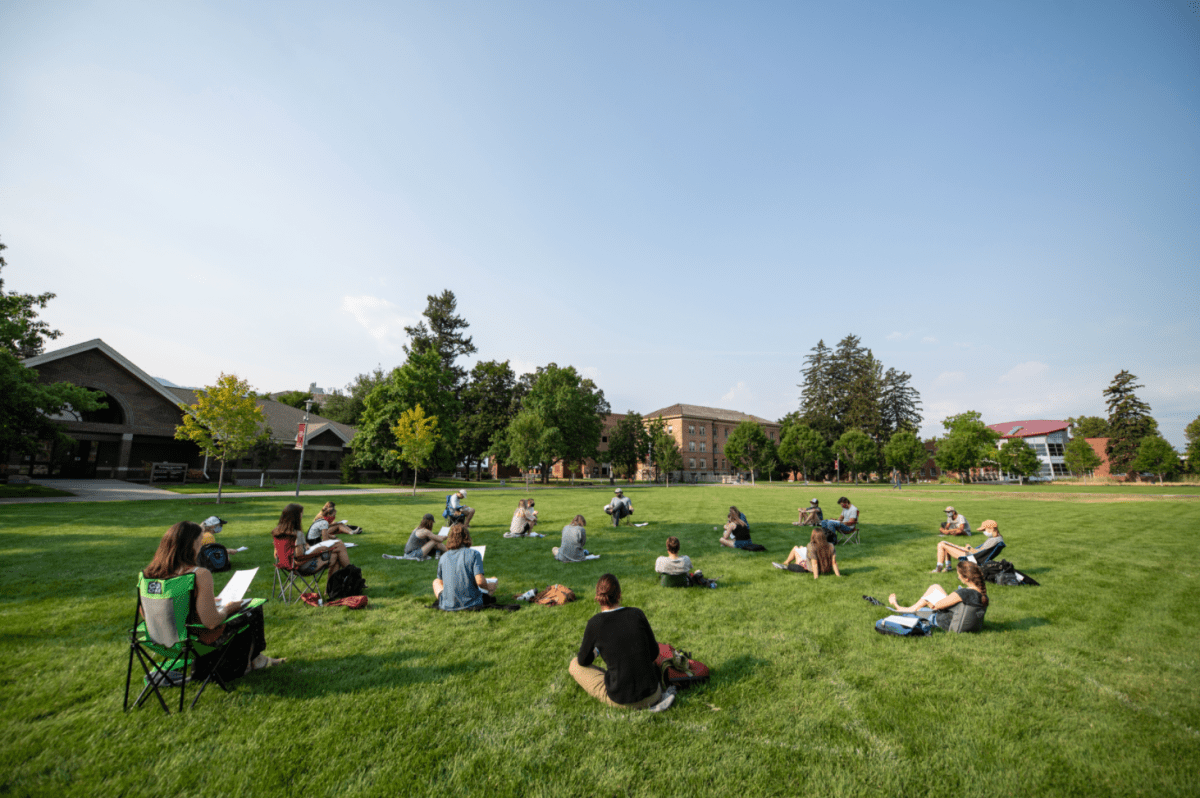 Today, Gallatin County has gotten the outbreak under comparative control. The county’s 57 active cases, as of September 1, now make up 2% percent of the cases statewide.

Montana State University and the University of Montana, the state’s largest institutes of higher learning, began classes August 17, and plan to end classes on the day before Thanksgiving so students are able to go home for the holidays without worrying about spreading COVID-19 with cross-country travel. Until then, or further notice, each school has implemented a mix of in-person and online learning.

As of August 26, Montana State has recorded a cumulative 31 COVID-19 cases, nine of them currently active, according to the Gallatin City-County Health Department, which updates the numbers weekly. The University of Montana is declining to report case numbers, even at the urging of the faculty senate, other than to say they are “low.” The university cites student privacy laws to justify withholding the information, even as hundreds of universities nationwide reporting cases.

Still, both schools are lacking what many universities across the country call one of the most important components of their efforts to remain open: surveillance testing.

HOW OTHER UNIVERSITIES ARE RESPONDING

Both the University of Montana and Montana State have set up symptomatic testing on campus for students, faculty and staff, but neither school is offering asymptomatic surveillance testing — a strategy that some other schools are using to help control the virus.

For example, at the University of Illinois, a campus with more than 45,000 students, researchers on campus developed a saliva-based COVID-19 test that produces rapid results and has been approved by the Food and Drug Administration. The university is requiring all students, faculty and staff to be tested twice per week and document a negative result at least every four days. A smartphone app then uses that information to allow or deny entrance into campus buildings. If a student or employee is not tested, or produces a positive, they cannot access campus buildings and some area bars.

Each day, the University of Illinois processes more than 15,000 tests, more than the state of Montana’s weekly goal. So far, UI has found at least 700 positive cases. The seven-day rolling average of the 15,000 or so daily tests is 0.79% positive.

In some cases, the test results have been inconclusive or delivered false negatives, but officials say the strategy is largely effective.

“Once you know where the virus is, you can deal with it. If you don’t know where it is, it’s very tricky. It will develop,” University of Illinois president Timothy Killeen told CNBC.

“It’s not a question of whether we do or don’t want to do this. There’s no capacity within the testing infrastructure to do asymptomatic testing of students,” Ellig said.

Montana State University has set up a lab where it processes COVID-19 tests from across the state, largely from community-wide asymptomatic, testing events. However, the school is not using that lab for its own testing program. Instead, MSU’s symptomatic testing program uses the state lab in Helena.

Another COVID-tracking tool being used by some universities is wastewater testing. At the University of Arizona, testing of dorm wastewater found that COVID-19 was present. The school chose to then test all occupants of the building, identifying the two positive students and requiring them to isolate.

“With this early detection, we jumped on it right away, tested those youngsters, and got them the appropriate isolation where they needed to be,” said Richard Carmona, a former U.S. surgeon general who is directing the school’s reentry task force, in a news conference.

Both Missoula and Bozeman are testing municipal wastewater to monitor for COVID-19 outbreaks in the community, though neither UM nor MSU is testing specific campus buildings.

Nationally, schools including the University of North Carolina and Notre Dame, have already transitioned to online-only after just a few days of classes and significant outbreaks of COVID-19.

Neither Montana university has defined a threshold of positive cases that would trigger a move to all-virtual classes.

“That question needs to be put into some context,” Ellig said. “There’s not a number of when any of the campuses would go fully online, and the reason is it’s a very dynamic formula.”

Ellig said the formula takes into account, at minimum, how many hospital beds are available in a university community, the rate of hospitalization, the rate of spread, the percentage of tests producing positive results, and the manner of transmission. In other words, Ellig said, any decision to transition to online-only classes will depend on the circumstances of a specific outbreak or event.

“That’s why it’s virtually impossible to give anyone a number,” he said.

Short said UM is working with a similar formula.

“There’s not a set threshold, but it’s an ongoing discussion of a blend of considerations,” she said. “At UM, we have a small team of faculty from public health, Curry Health Center, administrators, housing, and student affairs that meets daily and consults regularly with Missoula City-County Health Department about the situation on campus, as well as the community.”

The article was published at COVID goes to college