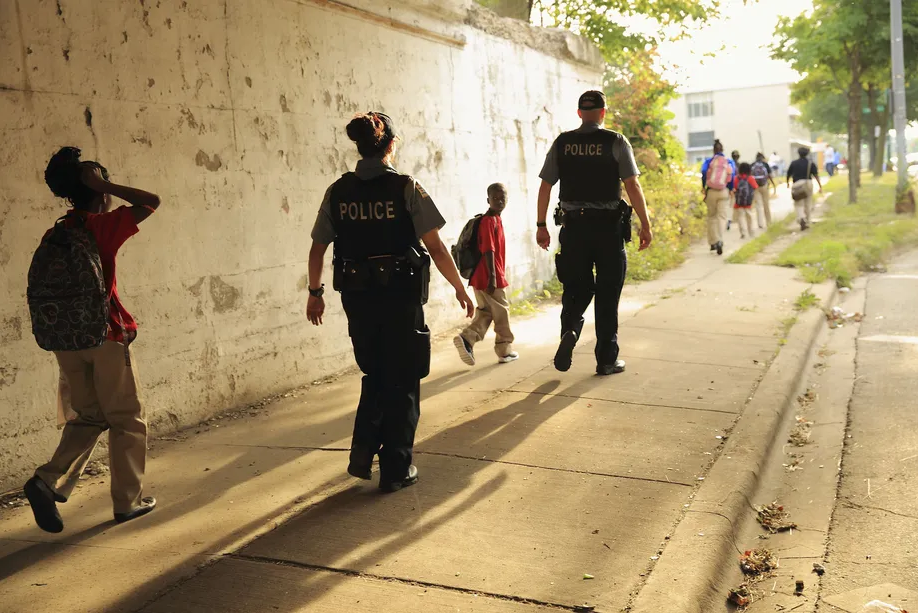 A year after Chicago Public Schools put decisions about school police into the hands of Local School Councils, the volunteer groups are once again grappling with the hot-button issue and aiming to address it more thoughtfully.

Last summer, amid roiling protests over racial justice and policing, Chicago Public Schools punted the decision about whether to keep police in its buildings to the individual elected councils that govern most district-run schools. That meant the groups made up of parents, students, school leaders, and community members were forced to quickly make a big decision on the controversial issue. Most opted to keep the officers on campus.

“The conversation had so much noise around it, because of the moment in time, and where we were as a country,” said Anthony Smith, chair of the council at Lindblom Math & Science Academy, a selective-enrollment high school in West Englewood. Lindblom narrowly voted to keep its police, called School Resource Officers, last August — then complained to the district about its lack of options.

At the time, racial justice protests had sparked nationwide conversations over policing in schools, including whether officers treated students of color differently and whether their tactics were appropriate.

Then a year of mostly remote learning rendered the decision at Lindblom and hundreds of schools throughout the district mostly moot. Now, as the issue again surfaces, the goal is the same, said Smith: “To make the best decision that benefits our students and that takes into consideration what’s going on outside without being overwhelmed by it.”

Chalkbeat is interested in tracking the outcome of Local School Council votes around school police. Is your school coming up with a new safety plan? Tell us about it.

Last summer, the district’s plan for equipping LSCs to contend with the decision consisted of a 20-page slide deck focused mostly on procedural issues. This year is different, as LSC deliberations will be supported by the recommendations of a district-commissioned steering committee, consisting of five education advocacy organizations: ARK of St. Sabina, BUILD, Inc., Community Organizing and Family Issues, Mikva Challenge, and Voices of Youth in Chicago Education (VOYCE).

The committee’s report doesn’t recommend keeping SROs or scrapping them, even though some of the groups involved have also campaigned to have SROs removed from schools. Instead, the purpose of the report is to help LSC members think through their approach to school safety, shaped by concepts such as trauma-informed practice and crisis response. From there, LSCs consider whether and how SROs—as well as alternatives such as holistic or restorative justice techniques—might fit in.

“Doing that work has really changed the perspective of so many people” considering the issue, said Meyiya Coleman, a VOYCE youth organizer.

While there are more resources available, the conversation is still weighty, participants say. It’s also still contentious, and tests the limits of the volunteer LSCs, whose members are more accustomed to advising principals on issues such as their school’s annual academic plan.

At Lindblom, for example, the school community remains divided on what its philosophy of school safety should look like. It’s a selective-enrollment school, meaning it draws many students from beyond its neighborhood. And it’s located in an area, West Englewood, that has long struggled with crime. Some parents’ desire to protect the school’s students is at odds with others’ vision of what it means for the school to be a participant in the community.

“We can’t create a divide between the school and community,” said Claudio Rivera, a Lindblom parent who favors eliminating the school’s SROs. “They have to be in relationship, and we have to be welcoming in order to establish a true sense of safety.”

Smith, Lindblom’s LSC chair, is an alumnus of the school as well as the parent of a current Lindblom student and a recent graduate. He appreciates the careful consideration of the school’s relationship to its community — a discussion he says dates back decades, to his own years as a student there. He also says the steering committee’s resources have helped Lindblom’s LSC consider some unique approaches this year that they wouldn’t have pursued otherwise.

As a result, after a series of meetings, town halls and surveys, Lindblom’s LSC recently reached a decision on how to approach SROs for the upcoming school year. Smith isn’t ready to share full details as the plan still awaits final district approval, but the broad strokes idea is to keep the officers while also introducing restorative-justice concepts from the framework, along with a plan to better engage the neighborhood.

Every member present voted in favor of the plan.

“It’s absolutely a step forward,” Smith said, “a holistic plan that benefits the students as the first priority but also engages the neighborhood and benefits the whole community.”

This article was originally posted on In Chicago, the debate over school police isn’t over — it’s just quieter