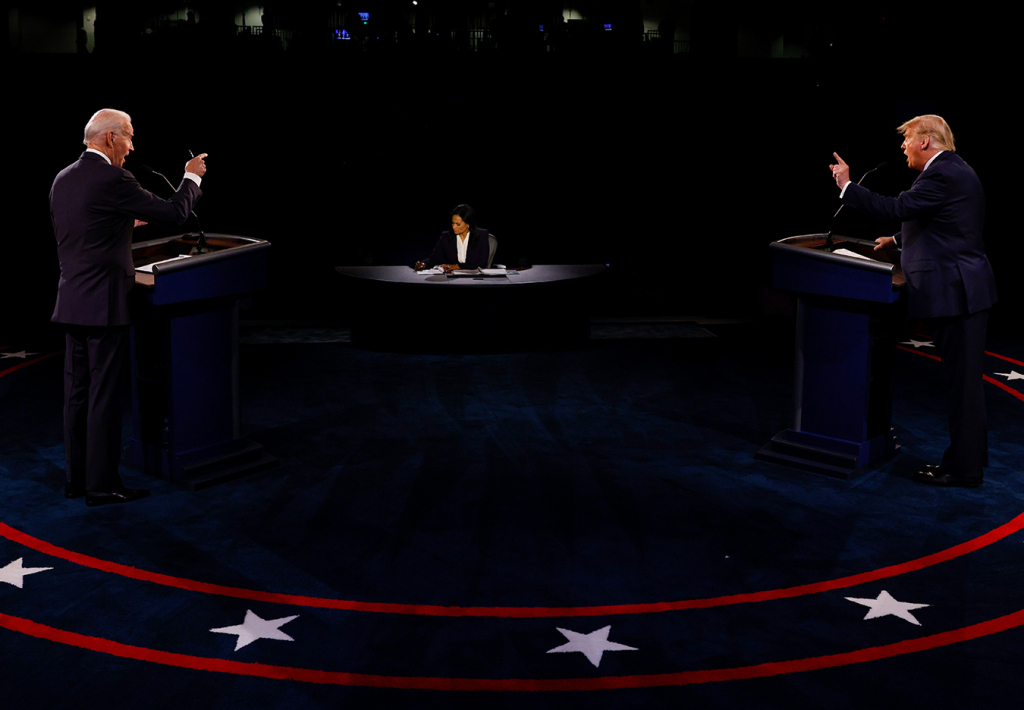 In the second and final debate of the 2020 presidential race, President Donald Trump and former Vice President Joe Biden sparred over Trump’s handling of the pandemic and Biden’s plan to reform health care. In stark contrast to the first debate, there was more policy talk. There was also less interrupting.

Trump said a COVID-19 vaccine is “ready” and will be announced “within weeks,” shortly before conceding that it is “not a guarantee.”

Biden said Trump still has no comprehensive plan to deal with the pandemic, even as case counts continue to climb. “We’re about to go into a dark winter, and he has no clear plan,” Biden said.

Trump claimed Biden’s health care plan would lead to “socialized medicine,” conflating Biden’s proposal to introduce a government insurance option with more progressive proposals that would eliminate private insurance. “I support private insurance,” Biden said, promising, “Not a single person with private insurance would lose their insurance under my plan.”

You can read a full fact check for the evening, done in partnership with PolitiFact, here.

Meanwhile, we broke down the candidates’ closing coronavirus and other health-related claims so you can do your part: vote.

Here are the highlights:

The number of COVID cases is climbing once again, after falling consistently between late July and mid-September. Cases are now at their highest point since early August, with almost 60,000 new confirmed infections a day. That’s only about 10% lower than the peak in late July.

The one encouraging change is that, since a peak in August, deaths have fallen fairly consistently. That’s due to a combination of factors, including improved understanding of how to treat the disease. Yet COVID deaths have settled in at about 800 a day, keeping total deaths per week in the U.S. above normal levels.

Trump: His administration has done “everything” Biden suggested to address COVID-19. “He was way behind us.”We rated a similar claim Pants on Fire. While there are some similarities between Biden’s and Trump’s plans to combat COVID-19, experts told us any pandemic response plan should have certain core strategies. The Trump administration has released no comprehensive plan to battle the disease, except with regard to the development and distribution of vaccines. Trump’s main intervention was implementing travel restrictions, while efforts to roll out a widespread testing plan faced difficulties.

Biden released a public COVID plan; the first draft was published March 12. It included public health measures such as deploying free testing and personal protective equipment, as well as implementing economic measures such as emergency paid leave and a state and local emergency fund.

Trump: “As you know, 2.2 million people were expected to die. We closed the greatest economy in the world to fight this horrible disease that came from China.”His claim about the estimated deaths rates Mostly False. Trump frequently refers to this number to claim that his administration’s moves saved 2 million lives. However, the number is from a mathematical model that hypothesized what would happen if, during the pandemic in the U.S., neither people nor governments changed their behaviors, a scenario that experts considered unrealistic. The U.S. has the highest death toll from COVID-19 of any country, and one of the highest death rates. Also, credit for shutting down the economy doesn’t go primarily to Trump, but rather to states and local jurisdictions. In fact, Trump encouraged states to open back up beginning in May, even when there were high rates of COVID transmission in those areas.

Trump: “We cannot lock ourselves in a basement like Joe does.”We rated a similar claim False. It is one of Trump’s favored shots to say Biden isolated himself in his basement. In the first few months of the pandemic, Biden did run much of his campaign from his Delaware home. He built a TV studio in his basement to interact with voters virtually. But that changed.

Trump: Said of Dr. Anthony Fauci, “I think he’s a Democrat, but that’s OK.”This is wrong. Fauci, director of the National Institute of Allergy and Infectious Diseases, is not affiliated with a political party. He hasn’t endorsed any parties or candidates.

Biden: “We are in a circumstance where the president still has no plan, no comprehensive plan.”This is largely accurate. When Biden claimed during the first debate that Trump “still won’t offer a plan,” we noted the Trump administration’s “Operation Warp Speed” for vaccine development as well as its more detailed plan for vaccine distribution. But the administration has not released a comprehensive plan to address COVID-19.

This is inaccurate. Over the summer, Florida, Texas and Arizona experienced record surges in cases that later eased — but now they are all seeing new surges. Over the past week, The New York Times’ tracker notes, as of Friday, new infections are up 37% in Florida, 13% in Texas and 47% in Arizona, from the average two weeks earlier.

Trump: “When I closed [travel from China], he said I should not have closed. … He said this is a terrible thing, you are a xenophobe; I think he called me racist. Now he says I should have closed it earlier.”

Mostly False. Joe Biden did not directly say he thought Trump shouldn’t have restricted travel from China to stem the spread of the coronavirus.

Trump: “They have 180 million people, families under what he wants to do, which will basically be socialized medicine — you won’t even have a choice — they want to terminate 180 million plans.”

Pants on Fire. About 180 million people have private health insurance. But there is absolutely no evidence that under Biden’s health care proposal all 180 million would be removed from their insurance plans. Biden supports creating a public option, which would be a government-run insurance program that would exist alongside and compete with other private plans on the health insurance marketplace.

Biden: “Not one single person with private insurance” lost their insurance “under Obamacare … unless they chose they wanted to go to something else.”

This is inaccurate. This is a variation of a claim that earned President Barack Obama our Lie of the Year in 2013. The Affordable Care Act tried to allow existing health plans to continue under a complicated process called “grandfathering,” but if the plans deviated even a little, they would lose their grandfathered status. And if that happened, insurers canceled plans that didn’t meet the new standards.

No one determined with any certainty how many people got cancellation notices, but analysts estimated that about 4 million or more had their plans canceled. Many found insurance elsewhere, and the percentage was small — out of a total insured population of about 262 million, fewer than 2% lost their plans. However, that still amounted to 4 million people who faced the difficulty of finding a new plan and the hassle of switching their coverage.

This article was originally published on In Tamer Debate, Trump and Biden Clash (Again) on President’s Pandemic Response