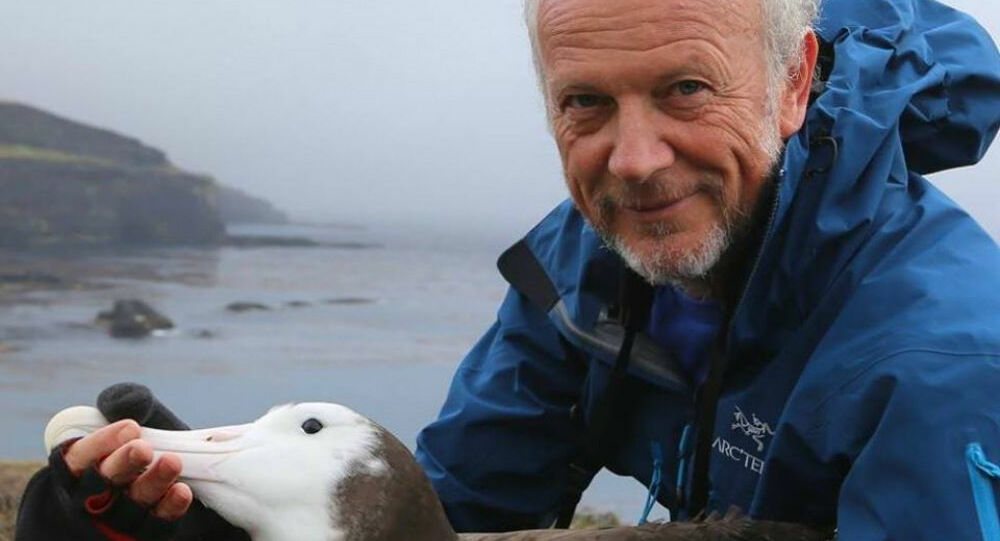 Albatross expert Dr Henri Weimerskirch, of the French National Centre for Scientific Research (CNRS), turned his favourite seabirds into spies two years ago by fixing them up with loggers that could detect the radar of illegal fishing vessels. The information from this project, known as OCEAN SENTINEL, has helped governments select which parts of the ocean to patrol. But Dr Weimerskirch wanted to recruit another, possibly better, species to stealth operations. In late 2020, he returned to the remote Kerguelen Islands, in the southern Indian Ocean, to see if they would cooperate. He told Horizon about his expedition.

The work two years ago went very well but at that time we were using wandering albatrosses. Black-browed albatrosses are more attracted by fishing vessels so I thought they might give us more information.

In November last year I flew, with two other field workers, from France to the Indian Ocean island of Réunion, then spent 15 days on a supply ship to the Kerguelen Islands (an archipelago 3,400 km to the south – see map below). The capital, in the northeast, is Port-aux-Français, which has a scientific base of about 80 people. The colony of black-browed albatrosses is 30-40 km away, so we flew there by helicopter.

It’s a sub-Antarctic island so there are no trees and, above 200-300 metres, no vegetation, only rock. The explorer Captain James Cook called it Desolation Island. There’s a lot of rain and wind and some snow, although it wasn’t very cold. Temperatures ranged from zero to about six degrees.

I enjoyed it there. We had a nice hut in a small valley along a river.

Every day we woke at 6am and walked for three quarters of an hour to the colony.

Black-browed albatrosses nest in cliffs so we had to use a rope to get from the plateau to 200 metres down. We were then in the cliff, on a ledge about two by ten metres with about 200 nests below us. They were part of a larger colony of a thousand pairs.

At the time, they were incubating their eggs, so there was one bird on the nest and the partner was at sea hunting for fish. When the partner comes back it takes over the egg and the other one goes. We wanted to attach loggers to the birds at the time they were departing, so we had to wait for changeovers.

Each time there was a changeover we went further down with a rope to reach that nest. It took three of us – one to capture and hold the bird, one to attach the logger and the third to take notes and weigh the bird.

They are very tame so you can come very close without any problem. That’s the advantage of working with albatrosses.

Sometimes we had to wait for the whole day and there was only one changeover. Other days we did about ten. It depends on the wind. Albatrosses use wind to travel to reduce flight (energy) costs, so if the wind is not favourable, it takes more time for the birds to return to the colony.

The days were uncomfortable but we had good equipment, we had a lot of nice tea. And the site is very beautiful – it’s a spectacular cliff, you have the very rough sea and you have all the albatrosses flying around. Sometimes when it’s snowing it’s a bit cold, but otherwise it’s a very nice spot. It’s not difficult work so long as you don’t get vertigo in these steep cliffs.

After about eight days we had equipped 40 albatrosses with our new loggers. The birds are at sea for about 10 days so, after a few more days, the first ones started to return and we recovered the loggers.

A wandering albatross weighs up to 12 kg and the loggers two years ago were 40-60g. Black-browed albatrosses weigh 3 kg and so we made new loggers that were half the size.

Both new and old loggers had GPS antennae so we knew where the birds were. They also had radar detectors. But the new (lighter) loggers could not transmit their data. That’s why we had to retrieve them.

Each day at 6pm we had to contact our base (in Port-aux-Français) using a satellite phone to tell them that we were safely on the way back to the hut. They were nervous about our safety. That one minute on the sat phone was our only connection to the outside world. But it was quite nice because we had no information – nothing about COVID and all the problems.

In the evening we downloaded the data from the loggers onto our computers.

When the month was finished, to get back to the base we had to walk four hours and take a small boat for four hours across the bay. From there we took the next supply ship back to Réunion.

All fishing vessels must by law have transponders which signal where they are. If they switch them off they are probably doing illegal fishing. While we were on Kerguelen I had someone downloading all the movements of declared vessels in the southwestern Indian Ocean from their AIS (Automatic Identification System) transmissions. When I return to France, we will be able to tell whether the boats that were detected by the albatrosses had an AIS signal. If they don’t, then they were illegal if they were found in a national economic zone.

In our previous work we found that at a third of the boats were not using their transponders. We detected some sectors where there are a lot of illegal boats, for example around the Prince Edward Islands which are in South African waters.

This time we will have information from a different species, one that is even more attracted by fishing vessels. So we are expecting to have detected even more boats around Kerguelen. We are discussing (our findings) with the French authorities. This information will be used in the future for surveillance.

We are also interested in understanding whether the birds (that hang around) vessels gain more mass than birds foraging naturally. The question of mass gain is important when studying seabird-fisheries interactions. On the one hand there is a risk of being ensnared in on the lines, but there might be an advantage of gathering easy food.

This article was originally published on In the Antarctic, a scientist recruits albatrosses to pinpoint illegal fishing boats