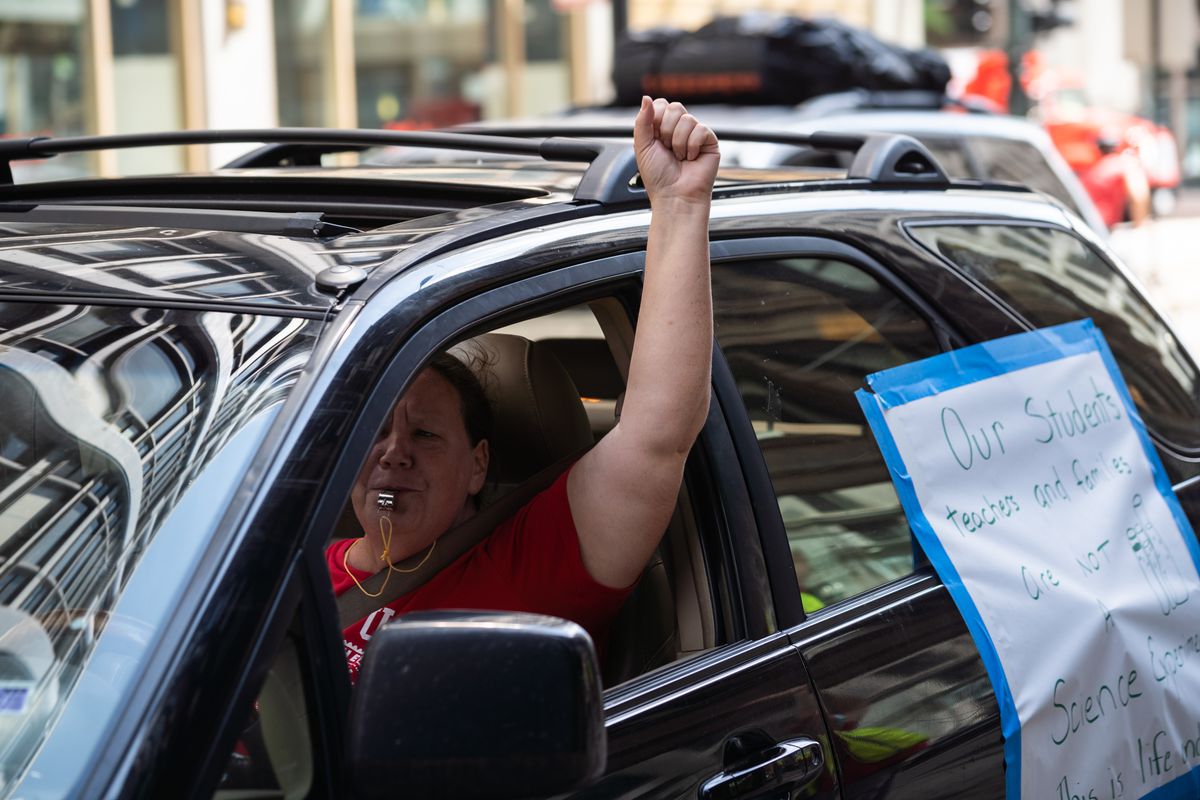 The nation’s second-largest teachers union says it will support strikes over teacher safety as heated discussions continue about whether and how to reopen schools for in-person instruction this fall.

It’s a symbolic move, and many teachers unions lack the legal ability to strike in a traditional way. But it’s the clearest signal yet that the unions will be a major force in school reopening decisions and are readying to block proposals they feel don’t go far enough to protect educators — which could further politicize the national debate over school reopening.

“If the authorities don’t get it right, and they don’t protect the safety and health of those we represent and those we serve, nothing is off the table — not advocacy or protests, negotiations, grievances or lawsuits, or, if necessary as a last resort, safety strikes,” said Randi Weingarten, the head of the American Federation of Teachers, at the union’s biennial convention on Tuesday.

A resolution, passed by the AFT’s executive council, says the union would back local or state-led teachers strikes over educator health and safety during the pandemic “on a case-by-case basis” and “as a last resort.” It’s an extension of rhetoric Weingarten has used for months, but marks the first time the union has explicitly endorsed teachers strikes as a tactic.

Already, the AFT and the National Education Association, the largest national teachers union, have supported a lawsuit against Florida’s governor and education commissioner, who have ordered schools to offer five days a week of in-person instruction to families who want it. Several large districts in Florida, where COVID-19 cases have continued to rise, have announced their intention to start the year fully remotely anyway.Become a Chalkbeat sponsor

Teachers have been pushing back against reopening plans in several other parts of the country, arguing that returning to school buildings will be unsafe for teachers and students.

In New York City, a caucus of the teachers union that often fights for social justice issues has asked teachers to protest and is floating a sickout. In Detroit, teachers took part in a demonstration against in-person summer school that blocked buses earlier this month. In Memphis, educators gathered last week for a socially-distanced protest in front of the district’s central office.

Several of the nation’s most vocal teachers unions, including those in Los Angeles, Chicago, Boston, and Milwaukee are planning to join a national “day of resistance” on Aug. 3. They’re calling on schools not to reopen for in-person instruction “until the scientific data supports it,” and for health and safety measures to be in place when schools do reopen, including smaller class sizes.

In recent days, the Chicago Teachers Union, which has said it wouldn’t rule out a strike over educator safety, launched a public social media campaign calling on the Chicago school district to answer educators’ questions about its plans to offer some in-person instruction this fall.https://platform.twitter.com/embed/index.html?dnt=false&embedId=twitter-widget-0&frame=false&hideCard=false&hideThread=false&id=1286793544125034497&lang=en&origin=https%3A%2F%2Fwww.chalkbeat.org%2F2020%2F7%2F28%2F21345279%2Finfluential-national-teachers-union-backs-strikes-as-tool-in-school-reopening-fight&siteScreenName=chalkbeat&theme=light&widgetsVersion=223fc1c4%3A1596143124634&width=550px

But that activism has been tempered by the reality that many schools don’t plan to re-open for in-person learning quickly, and other districts haven’t yet revealed the details of their plans.

Polls show that parents — particularly Black and Latino parents — are also wary of reopening schools. But at the same time, sustained teacher opposition could squelch efforts to offer in-person instruction even in places where the virus caseloads are lower, which could leave some vulnerable students and families without the in-classroom learning they want.

Exactly how risky returning to school buildings will be is also a complicated question. Public health experts are largely in agreement that schools should not reopen their doors in places where the coronavirus is spreading rapidly through a community. Federal officials acknowledged last week that schools may need to stay closed in “hot spots,” which the head of the Centers for Disease Control and Prevention defined as places with testing positivity rates over 5% — a threshold currently exceeded by many states, particularly in the South and West.

In places where the virus is under control, pediatricians and health officials say it’s important for students to return to classrooms, with plans designed to keep staffers safe, since adults are at higher risk of getting severely ill from COVID-19. School districts are now working out exactly what kinds of health and safety protections they will be able to provide, how they will accommodate older teachers and teachers with health concerns, and how to keep students at a safe distance from one another.

Answers are likely to depend on how much space districts have to spread out students and staff and how much money Congress sends to school districts to help pay for new coronavirus-related costs — and if any of it will be conditioned on offering in-person instruction, which could create an incentive to reopen more quickly.

Teachers unions have been at the table in many districts considering those issues. The question now is whether educators will find what districts come up with to be acceptable — and if not, whether they will be willing to strike or take other labor action.

Kisha Borden, the head of San Diego’s teachers union, has said she thinks this moment has the potential to carry on the momentum of the Red for Ed movement, in which teachers led walkouts and protests for higher pay and more school funding.

“You would see teachers standing up, putting their foot down and saying, ‘No, I’m not going to put my life at risk,’” she said earlier this month.

DOE officials report that the agency has cleaned over four billion gallons of contaminated groundwater through a pump and treat system, but two toxic plumes of TCE still flow through four miles of groundwater that lead to the Ohio River.

The DOE lacks a national strategy for nuclear cleanup, instead relying on site managers to contract with companies that manage, operate, and cleanup nuclear facilities. The Paducah cleanup is now being managed by Four Rivers Nuclear Partnership, a conglomeration of companies hired by the DOE for soil and groundwater remediation. One of them is Jacobs Engineering, a contractor that was sued for exposing hundreds of workers to toxic substances during cleanup of the nation’s largest coal ash spill in Tennessee; more than 40 have died. At least three other nuclear sites — Oak Ridge, Hanford in Washington, and Savannah River in South Carolina — have also contracted with Jacobs. (Jacobs Engineering declined an interview for this story.)

The DOE also declined to answer questions but said the agency was committed to the safe remediation of the plant and that they “look forward to continuing successful cleanup efforts in the future.” The agency works with the Citizens Advisory Board — a group of community members who apply and are appointed as well as liaisons from Kentucky and the regional EPA office — on environmental management at the Paducah site, including the monitoring of groundwater and planning for the site’s future use. Lamb advocated for the board many years ago, and the bi-monthly meetings are supposed to serve as a public comment period.

The board doesn’t have any power beyond giving recommendations to the agency, and current and former members are divided about its effectiveness. Lesley Davis joined for about a year in 2016; her grandfather had worked at the plant and died of cancer. “It was informational at times, but it didn’t feel like it was making much of a difference,” she said. “In hindsight, it felt like they were trying to keep a good public face.”

Lamb was a member for years, but he said he “can’t afford to care anymore,” because of his own health issues. “Someone else would have to carry the torch and it’s not likely to happen… It was a different time then,” he said, “and now it’s just sort of docile.”

In February, Paducah put up its floodgates, families stacked sandbags, and the bridge over the Ohio River to Illinois closed as floodwaters as rains drowned the region. According to local news stations, highway crews reported so much water they had trouble setting up warning signs. Former Kentucky Gov. Matt Bevin declared a statewide emergency due to heavy rainfall and flooding.

The Ohio River, three miles north of the Paducah plant, had record flooding in 2018 and 2019. Record flooding this year across the Midwest hit eight Superfund sites, and a GAO report released in November showed that 60 percent of U.S. Superfund sites are at risk from the impacts of climate change. By mid-century, there will be heavier rainfall, increased flooding, and more intense hurricanes in the Southeast, which has nearly a quarter of the 1,335 active Superfund sites on the EPA’s National Priority List.

An EPA spokesperson said that the Superfund program ensures that “severe weather event risks” are “woven into Superfund site-specific risk assessments and remedial designs.” But according to a 2017 report by the DOE, the Paducah plant hasn’t made any federal or local partnerships “for collaboration or exploration of local climate change measures.”

The Green New Deal resolution, which has not yet passed through the U.S. House of Representatives, identified cleaning up brownfields — contaminated sites previously used for development — and hazardous waste sites like Paducah as a key priority in restoring the American landscape — but there’s not yet a road map for that plan. While underground waste repositories may provide a solution, Ewing said that over the long term, the changing climate could make it more challenging: in a wetter environment, the amount of water leaking through the rock over the repository could be expected to increase.

Instead of focusing on cleanup plans, some state lawmakers and federal agencies are loosening regulations on hazardous sites. In 2017, Kentucky passed a bill lifting a nuclear moratorium, a move that some hope will turn the site into a research facility or nuclear reactor; the law loosens the requirements for toxic waste management. Last year, the DOE also moved to relax restrictions on the disposal and abandonment of radioactive waste.

Meanwhile, many people in the Paducah area are still waiting for answers about their health, about jobs, and about the future of the place they live. “I don’t necessarily know that I understand the long term plan or if it’ll ever be cleaned up in terms of the groundwater,” Lynn said. “I don’t know if that’s even possible.”

This story was published in partnership with Scalawag for our Powerlines series, which looks at climate change, justice, and infrastructure in the American South. The series is supported by the Temple Hoyne Buell Center for the Study of American Architecture at Columbia University, and is part of their POWER project.

Austyn Gaffney is a freelance writer and editor. Her work has appeared in HuffPost, In These Times, onEarth, Sierra, and Vice. You can find her stories here and follow her on Instagram and Twitter at @austyngaffney.