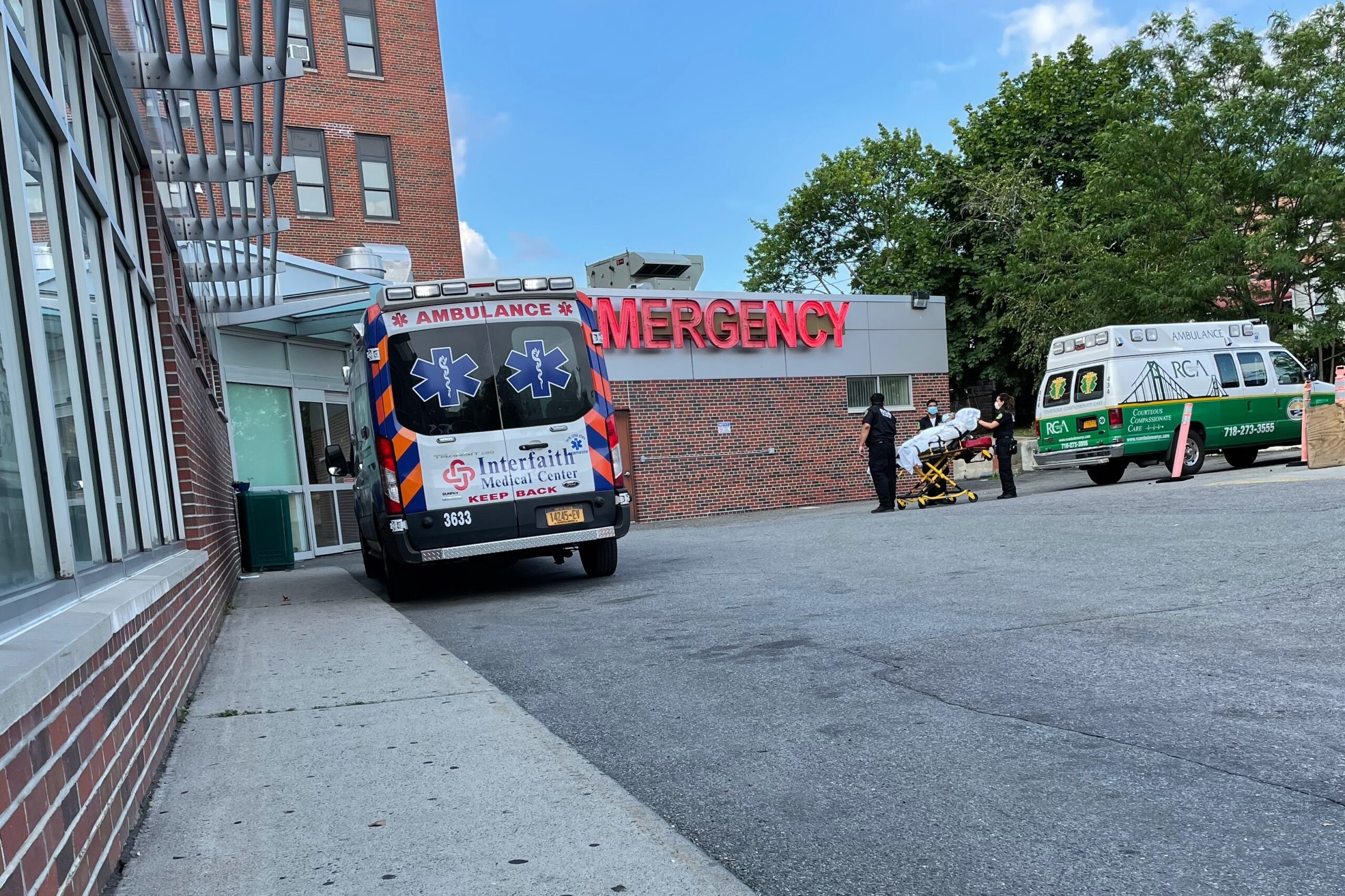 “It’s a shame,” said Sergio Enriquez, whose 78-year-old uncle was experiencing bowel obstruction on Wednesday when he arrived at the hospital for treatment. His uncle would need to go home or a nearby hospital after taking tests — and couldn’t stay at Kingsbrook overnight, Enriquez said they were told.

“It’s very upsetting,” Enriquez added. “He’s been treated here before, and he’s been happy with the treatment. And now to find out that he has to be, you know, he won’t be able to stay here and [needs to] go elsewhere. It’s kind of disconcerting.”

The inpatient shutdown at the East Flatbush medical center is part of a pre-pandemic, state-coordinated plan to consolidate services at three Brooklyn hospitals — a move that’s forging ahead despite opposition from neighbors and health care professionals.

Kingsbrook is transferring patients from its emergency room and other services in need of overnight, in-patient care to nearby facilities in Crown Heights and Brownsville, said Julie Keefe, a nurse at the hospital since 2012. She is a member of the Kingsbrook Community Action Committee, which has been rallying to stop the closure.

“They’ll be put in an ambulance and sent to Interfaith Hospital or Brookdale Hospital, delaying their care,” she said. Both hospitals are about 1.5 miles away from Kingsbrook.

“It’s very troubling for people having a medical emergency, where time is of the essence.”

Kingsbrook officials did not respond to requests for comment from THE CITY.

In 2018, Gov. Andrew Cuomo announced the launch of the nonprofit One Brooklyn Health as an operator taking over the independent Kingsbrook, Interfaith and Brookdale hospitals, which had struggled to stay solvent. Cuomo pledged $700 million “to transform the health care system and increase access to quality care throughout Central Brooklyn.”

The onset of the coronavirus pandemic last year paused the plan to consolidate the medical centers, with the hospital’s beds needed to accommodate patients.

The end of in-patient services at Kingsbrook is slated for July 1. Part of the property where the medical facility sits is on deck to become the site of an affordable housing development.

Some medical services will remain at the site, Cuomo has promised, including primary and specialty care. The ER will remain open.

Opponents of the in-patient bed closure say that the consolidation will increase inequity and decrease help for the community already struggling with health care access.

“It seems like care is being sacrificed in the pursuit of a real estate deal and a mandate to satisfy some requirements of special state funding, with real disregard for the impact on the patients,” said Deborah Socolar, an independent health care policy researcher.

Socolar, a member of the group pressing to stop Kingsbrook’s closure, said her concern is in the decline of “services available in an already underserved community.”

‘Stand Together, Fight Together’

Dr. Subhash Malhotra, who has worked at the hospital since 1982, agreed. “This is going to decimate the health care in the neighborhood,” he said.

Malhotra said his patients and the community are generally not aware of the plan to close.

The hospital administrators “don’t want to communicate with the community because then they will lose the patients out of One Brooklyn Health,” he said. “They want to keep those patients coming to Interfaith and Brookdale so they can make money.”

Valerie Sellers’ 65-year-old sister has been a patient at Kingsbrook on and off for the last year, suffering from anemia, congestive heart failure and a foot amputation. Sellers, whose sister stayed overnight at Kingsbrook on Wednesday, said that she didn’t hear about the planned shutdown until THE CITY informed her.

“I don’t think that’s fair to the patients,” said Sellers, 67, a resident of Brownsville.

She said if more locals knew about the closure, they could rally to keep it open.

“Everybody could stand together, fight together,” she said. “But if you don’t know about it, then how can you? This is like an isolated thing. They’re keeping this under wraps.”