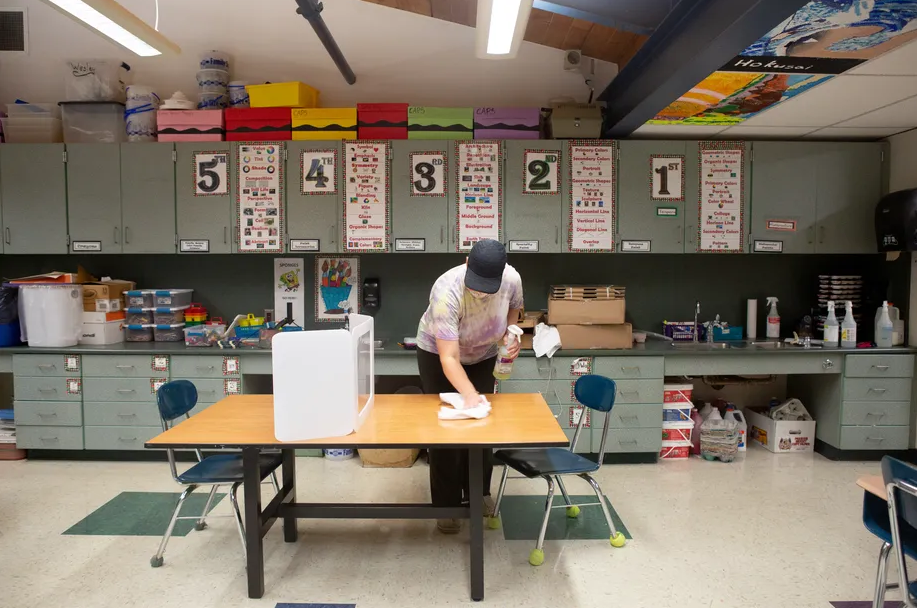 A proposed custodial services contract for Memphis-Shelby County Schools has reignited concerns about the cleanliness of  school buildings and the debate about whether the district should continue outsourcing building maintenance.

The four-year contract would award $34.4 million, according to board documents, to ServiceMaster Clean, a commercial cleaning company that has two franchises currently serving the district, along with SKB Facilities Maintenance.

MSCS officials say that the multi-year contract with ServiceMaster Clean would offer “some continuity and stability” going forward, and that relying on a sole vendor, rather than several as in years past, could improve communication between the district and its cleaning service.

Administrators also emphasized the proposed 30% increase from the nearly $26 million provided in the current contract would increase the base pay rate for employees to $15 per hour from $10. The higher wage, they said, would help prevent the high turnover seen among custodial staff in recent years and lead to cleaner schools.

But during a school board work session Tuesday and a committee meeting last week, board members questioned why administrators would recommend they continue working with any ServiceMaster operation when many in the community have expressed frustration with school buildings not being properly cleaned and employees not being paid a living wage.

“It all boils down to a standard,” board member Joyce Dorse Coleman said during the committee meeting last week. “So we’re saying that our children do not deserve the highest possible standard? … We’re going back to the drawing board and starting over because our children, my children, my son’s children deserve the best.”

The district should do more than “recommend” their custodial company pay their employees a living wage, she said.

Board Vice Chair Althea Greene — who represents parts of North Memphis and Binghampton — said she almost started crying during a recent Zoom call when she heard concerns from students about the cleanliness of school buildings. Afterwards, Greene decided to visit a few schools herself, and said she was disturbed by what she found.

At 9 a.m. the Monday after spring break, Greene said, classrooms and bathrooms at one school had clearly not been cleaned and there was no hand sanitizer or paper towels. At another school the following morning, Greene said she found a similar situation: She moved a garbage can and found ants and Goldfish crackers all over the floor.

“We could all probably just start crying talking about what we have witnessed personally in buildings, but we’re going to save our tears and put them in a bucket for you so you can go back and bring someone else,” Greene told administrators at the committee meeting. “This is unacceptable. How dare we want to give anybody four years? A year is enough.”

Board member Miska Clay Bibbs aired similar concerns last week, asking administrators to share the scorecards they used to pick ServiceMaster Clean over six other bidders and questioning whether it was time to bring custodial services back in house.

The board will discuss the contract again at its April 26 business meeting.

Worries about school building cleanliness are nothing new: Soon after Superintendent Joris Ray took the helm of MSCS in 2019, he put stiffer penalties and accountability measures in contracts with ServiceMaster and Aramark, a company the district later cut ties with. Then, when the pandemic started the following spring, school staff again sounded the alarm on classroom cleanliness.

The board first outsourced custodial services nearly a decade ago to cut costs during the merger of Memphis City Schools with suburban Shelby County Schools. The move was one of the most intensely debated issues in the merger, with former school board member Sara Lewis lambasting the outsourcing plan saying, “My soul won’t allow me to do this.”

Outsourcing janitorial services saved the district about $12 million at the time, but it resulted in pay cuts for Memphis City Schools’ custodial employees.

Before outsourcing, the average pay for the unionized janitorial staff was $10-$12 an hour and included retirement benefits. After the merger, the promised hourly wage was $9.50, according to a November 2013 article in The Commercial Appeal. Some employees said at the time that the company didn’t keep that promise and that they were getting just $9 an hour.

Nine years later, the starting wage is $10 an hour.

After hearing board members’ concerns last week, Ray said he directed MSCS Chief Financial Officer Toni Williams to look into the costs of bringing the services back in house. She found it would cost the district about $10.2 million more than the proposed $34.4 million contract.

Although there are benefits to the district employing its own custodial staff — like having more direct say over quality of service and improving morale and pride — Genard Phillips, chief of business operations, said the district cannot guarantee it could find enough employees amid ongoing worker shortages across the country.

And overall, Phillips said, district cleaning scores this year showed conditions were better at the schools served by the two ServiceMaster franchises — ServiceMaster by Stratos based in Downtown Memphis and ServiceMaster Facilities Maintenance in Southeast Memphis — compared with SKB. They also found a direct correlation between cleaning performance and staffing levels, Phillips said.

The recommended minimum wage increase from $10 to $15 an hour, he said, will hopefully drive down high turnover rates, attract more people to the jobs, and improve pride and, in turn, quality.

Ray said Tuesday that he understands board members’ concerns and has himself found the quality of custodial services to be “spotty” from school to school.

But he said he doesn’t think MSCS is in a position to incur the extra expense of an in-house custodial staff amid declining enrollment.