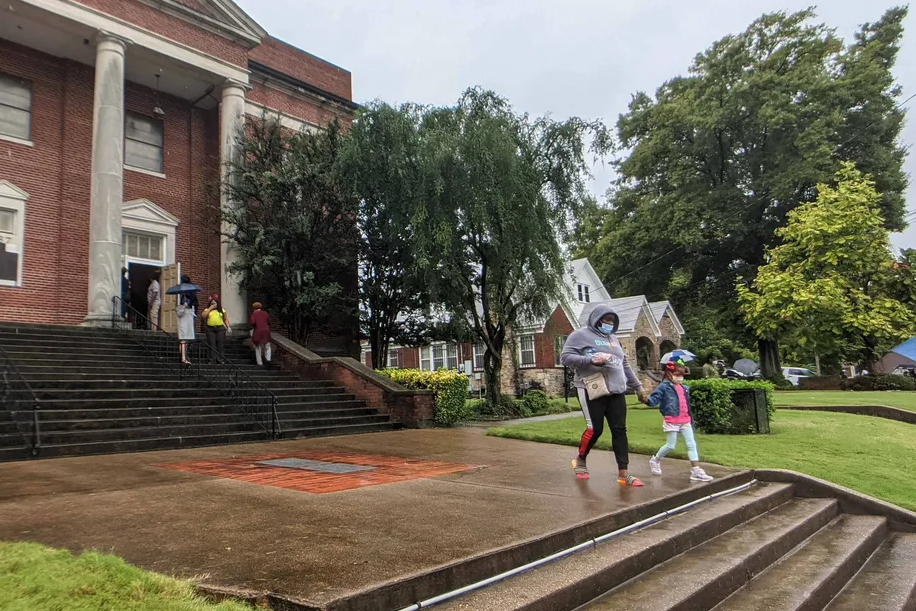 When a 13-year-old boy arrived at Le Bonheur Children’s Hospital on Thursday morning after being shot in his South Memphis elementary school, his injury wasn’t an anomaly.

The boy is one of more than 100 children the Memphis hospital has treated for gunshot wounds this year, said Barry Gilmore, Le Bonheur’s chief medical officer and a pediatric emergency specialist. The hospital is on pace to exceed last year’s record of 135 such injuries, he said.

“Unfortunately, not only in Memphis but throughout the country, we’ve been facing increasing levels of injuries due to gunshot wounds to children all throughout the last year, and certainly throughout the pandemic,” Gilmore said Thursday afternoon at a news conference.

The injured boy is hospitalized in critical condition and a fellow student is in custody, according to district and police officials. The shooting in a stairwell at Cummings Elementary School Thursday morning left the community reeling, and caused leaders and activists to speak out against soaring gun violence in the city and across the nation.

Roshun Austin — who leads one of the city’s top community development organizations, The Works — said Thursday’s events must be centered in the knowledge that Cummings’ ZIP code of 38106 has one of the lowest life expectancies in the city.

“As bystanders, we start to blame,” she said. “We blame individuals or communities of people instead of systemic issues that cause people to live in poverty, have less than standard housing, and the systemic racism that has existed since our nation’s beginning.”

Her organization, which primarily focuses on South Memphis housing, has expanded in recent years to supporting and strengthening parents in the neighborhood. Austin said that in the days after the shooting, she hopes there’s focus and effort put toward the neighborhood’s blighted houses and general disinvestment, in addition to safety and gun violence.

“I didn’t know the families affected today personally, but know if they live anywhere near Cummings, they have experienced trauma, even if it’s just watching what’s happening to their neighborhood,” Austin said. “I might not know them, but they are a part of me. It might sound cheesy, but we truly love others as our neighbors here. And this hits the people of South Memphis very hard.”

Rev. Michael L.W. More, pastor at Metropolitan Baptist Church, moved his family to the Soulsville neighborhood in January 2020. He recalled the feeling of hearing gunshots almost nightly and said he began thinking about what he could do to make a change.

The entire community should do the same in the wake of Thursday’s school shooting, he said.

“While we are trying to figure out what has happened, what we also need to do is try to make sure this never happens again,” he said. “Our students, families, our communities — especially in South Memphis — need more people to step up.”

Shelby County Schools Superintendent Joris Ray echoed Moore’s call for more neighborhood support. He urged the community to “put the guns down,” adding: “We don’t put guns in students’ backpacks. We don’t sell guns in our schools. But we have to stop them from getting into our community.”

“These are not the plans I want to talk about,” Ray said, referring to the district’s preparations for active shooters on school property. “I want to talk about lesson plans. About literacy. About Reimagining 901. That’s what we should be talking about.”

Thursday’s shooting is another reminder that the community must be intentional about how it addresses violence and trauma, said Charlie Caswell, who knows all too well the trauma gun violence has on children. By the age of 14, Caswell had witnessed a friend shoot another friend, and the killing of his best friend.

The longtime faith leader and community activist said he prays that all the children affected — the child who was shot, the shooter, and classmates — will get the counseling they need to overcome their trauma.

“I carried that anger and trauma in me for a long time because I didn’t have an outlet or a counselor,” said Caswell, executive director of Legacy of Legends CDC, a program focused on mitigating Adverse Childhood Experiences and creating trauma-informed and trauma-responsive communities. “I know that’s going to have a long-term ripple effect into adulthood if that trauma isn’t addressed.”

Childhood trauma is a cycle, Caswell said: Limiting traumatic experiences will lead to fewer such experiences in the future. It all comes down to creating a safe, healthy environment free of violence, from children’s homes to their schools and the greater community, Caswell said.

If a child grows up around constant violence, it will traumatize them and “revert to what they know,” Caswell said.

Schools, for example, should more often teach conflict resolution to show kids there are other ways to handle conflict, he said.

Cardell Orrin, executive director of the education advocacy organization Stand for Children Tennessee, also called for more resources and help for all the children touched by the tragedy, including the shooter.

“It’s tragic. I’m praying for the child who was shot, his family, the children who saw it, and the child who fired the shot,” Orrin said. “This entire community is hurting.”

This article was originally posted on Memphis school shooting prompts community leaders to speak out on gun violence, community investment