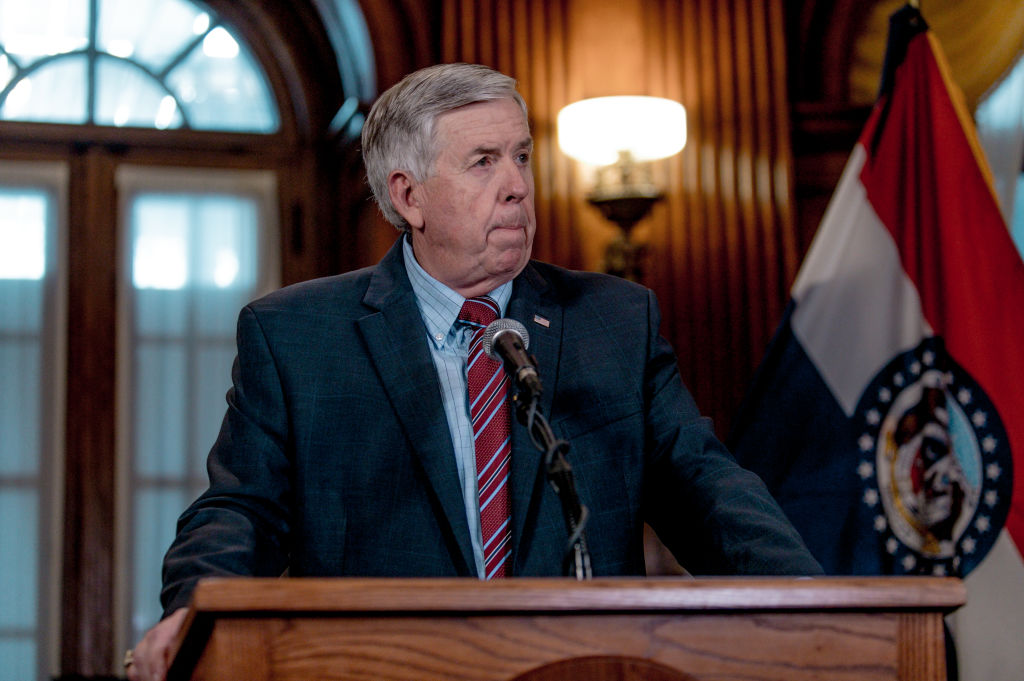 Missourians will pay higher taxes at the pump in October, but they can get their money back under new legislation Gov. Mike Parson signed Tuesday.

Those involved in approving the new tax recalled struggles to pass the initiative and emphasized the importance of the revenue to build or repair roads and bridges.

After several failed ballot measures to increase the tax during the past 25 years, a contentious debate in the House of Representatives during the last week of the 2021 session, and tax cuts added to the “Wayfair” sales tax legislation, Senate Bill 262 was passed and sent to the governor.

“For many of us, this is a long time coming,” Parson said. “If we truly want to put Missouri on the right path, I believe we have to have workforce development and infrastructure. If you get those priorities in place, we can build off that. … And then not only our highways and bridges, but our rail systems, airports and river ports. We have so many opportunities to build off this.”

The state gasoline tax will increase 73% to 29 cents a gallon in 2025. However, citizens can get back the portion of the new taxes by saving receipts and filing a claim for a refund.

“Horrible moment to be celebrating a massive gas tax hike as gas prices soar,” Sen. Bill Eigel, R-Weldon Spring, posted on social media. “Lots of folks in Missouri who voted red last November are furious over this. … SB262 is the largest tax increase in Missouri history. It is a violation of Article IX Section 18-24 of the Missouri Constitution. It is a violation of Article II, Para I, Section IX of the Missouri GOP platform. Tough day for conservatives in Missouri.”

The tax is expected to generate about $500 million in additional revenue for MODOT to improve roads and bridges. During committee hearings MODOT estimated it needs $745 million to complete all necessary projects.

“Today is an historic day,” said Rep. Becky Ruth, R-Festus, who handled the bill in the House. “We have been living on a 1996 budget for 25 years in our state. This is a strong investment in roads and bridges that’s going to matter for years to come. But it’s also about public safety. It’s about jobs. It’s about economic development. I want to make sure folks traveling on our roads and bridges are safe.”

“I was anxiously watching from the floor leader’s office on their big-screen TV,” Schatz said. “We were constantly working members on the floor. We worked throughout the whole process, making sure we had the votes and everything was secure. Yes, there was vocal opposition. But what people need to understand was we negotiated an offsetting tax cut on the ‘Wayfair Bill’ that ultimately allowed us to get this thing through.”

Senate Bill 153, known as the “Wayfair Bill” for collecting sales taxes on out-of-state online merchants, was signed into law earlier this month and includes an earned income tax credit and a tax cut. Current law reduces the top rate of Missouri income tax by 0.5%, phased in over a period of years in 0.1% increments and effective if general revenue collections meet a certain threshold. The bill adds two additional 0.1% reductions. It also reduces the top tax rate by 0.1% beginning in 2024.

In the area around Hazelwood where the bill was signed, approximately 8% of the population lives at or below the poverty line, according to the St. Louis Health Partnership for a Healthy Community. Gov. Parson emphasized all Missourians can claim a refund of the new gasoline tax, but revenues will help infrastructure needs in economically disadvantaged areas.

“One of the things we’ve really focused on is bringing services to them,” Parson said. “How do we get to those high poverty areas?”