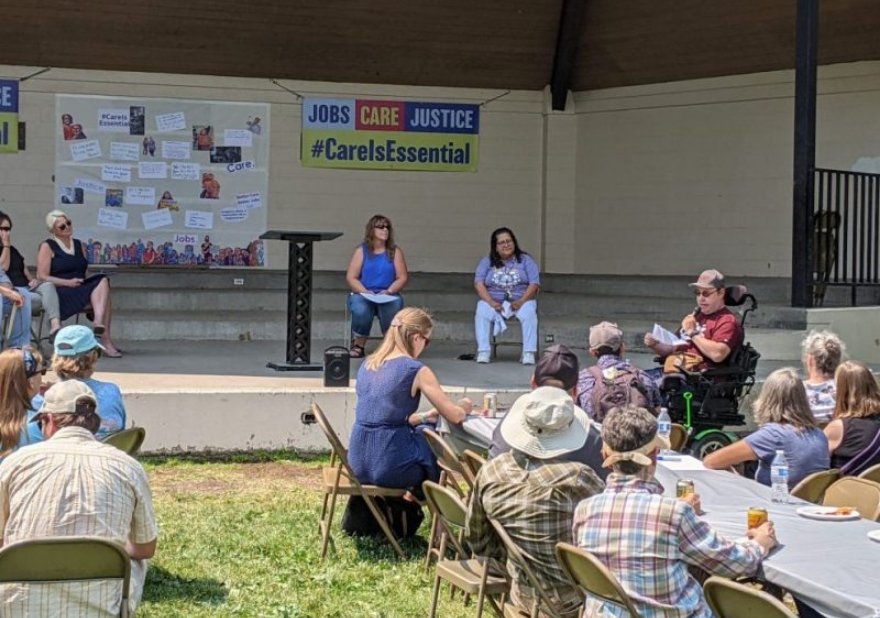 Beneath an orange haze of wildfire smoke Tuesday afternoon, Alyson Gregory painted a grim picture of the state of at-home care for Montana’s elderly. Addus HomeCare, the home health care provider where Gregory works as an agency director, had 48 clients in Missoula for whom it couldn’t provide services this month due to workforce shortages. Another 50 Missoulians were on the company’s waiting list.

Gregory spoke against a backdrop of home care workers, clients, union leaders and elected officials gathered at Missoula’s Bonner Park Bandshell to support the Better Care Better Jobs Act, a congressional proposal to invest hundreds of billions of federal dollars in home- and community-based care for the nation’s elderly and disabled. The event was organized by the Service Employees International Union, which represents home care workers. Gregory said the funding windfall would help bolster hands-on training opportunities and raise wages for home health care workers. Lisa Carpenter, an Addus service coordinator in Libby, noted that the starting wage for such workers in Montana is $10.50 an hour, $1.50 below the national average, and low enough to dissuade potential applicants.

“McDonald’s pays more,” Carpenter said. She added that in Libby, staffing shortfalls have left as many as 15 Addus clients without services, though she hopes to resolve the issue by the end of July.

The need for better wages was a major theme among the speakers at Tuesday’s event. Anna Volkersz, a Bozeman-based caregiver, told attendees that federal legislation could give Montana a chance to correct long-standing inequalities in the home health care workforce — 90% of whom, she added, are women, and 15% women of color. Jim Gibson, a home care client in Missoula who uses a wheelchair, credited those workers with helping him keep a job in dining services at the University of Montana for 19 years. Without them, he said, he’d be unable to get ready for work in the morning.

The call for that kind of support and pay parity has been less than convincing in Congress. President Joe Biden tried to steer $400 billion to the effort this spring under the American Jobs Act, a sprawling federal infrastructure package, but was rebuffed by Senate Republicans. Biden and a bipartisan panel of senators including Montana Sen. Jon Tester repackaged $579 billion in physical infrastructure spending separately last month, the same day a trio of Senate Democrats incorporated the home care component into the Better Care Better Jobs Act, which was introduced last month. SEIU State Director Jacquie Helt said that while repairing roads and bridges is important, Montanans shouldn’t lose sight of the state’s “human infrastructure.”

“We’ve been neglecting this part of our infrastructure for far too long,” Helt said.

Demographic and workforce projections underscore the growing demand for home health care services, which range from cooking, cleaning and bathing to assisting clients with medications. As MTFP reported last year, Montana is the oldest state west of the Mississippi and the ninth-grayest in the country, and by 2030, 22% of the state’s population is projected to be 65 or older. And according to the Paraprofessional Healthcare Institute, a national nonprofit advocating for long-term care services, job openings for at-home caregivers are projected to grow 18% by 2028 as Montana’s aging population seeks at-home care options — a desire those gathered in Bonner Park agreed has been exacerbated by COVID-19’s rapid spread in long-term residential facilities.

Missoula Mayor John Engen spoke to that very point, explaining that he’d become his 91-year-old mother’s primary caregiver during the pandemic. She contracted COVID-19, he said, and he moved her into his own home. He could not have provided her adequate care without the help of professional home health care workers, and said they deserve a “modicum of recognition” for that work, along with commensurate wages.

Demand may be rising on the horizon, but Gregory has more immediate concerns as well. Absent competitive salaries to entice new workers to the field, she’s had to offer other incentives, such as compensating staff for drive time between clients. The travel can be extensive, Gregory said, with some caregivers serving clients in far-flung rural towns likePlains and Trout Creek. The financial flexibility to offer that kind of extra compensation is limited, she continued, since Addus and other home health care providers get much of their funding from reimbursements through government avenues such as Medicaid and the U.S. Department of Veterans Affairs.

The need for services isn’t restricted to the elderly, either. Missoula resident Susie Orr attended Tuesday’s event with her 26-year-old son, Sam, who began experiencing stomach pains in May. Doctors eventually discovered a growth in his colon, which they promptly removed. It was the first surgery he’d ever had, Sam Orr told MTFP, and a home health care worker now visits twice a week to assist with his recovery. The situation is only temporary, but it’s highlighted for him the importance of having at-home care as an option.

“You never know when you’re going to have a health scare come up,” Orr said. “I mean, everyone’s worthy of health care and health care should be a human right.”