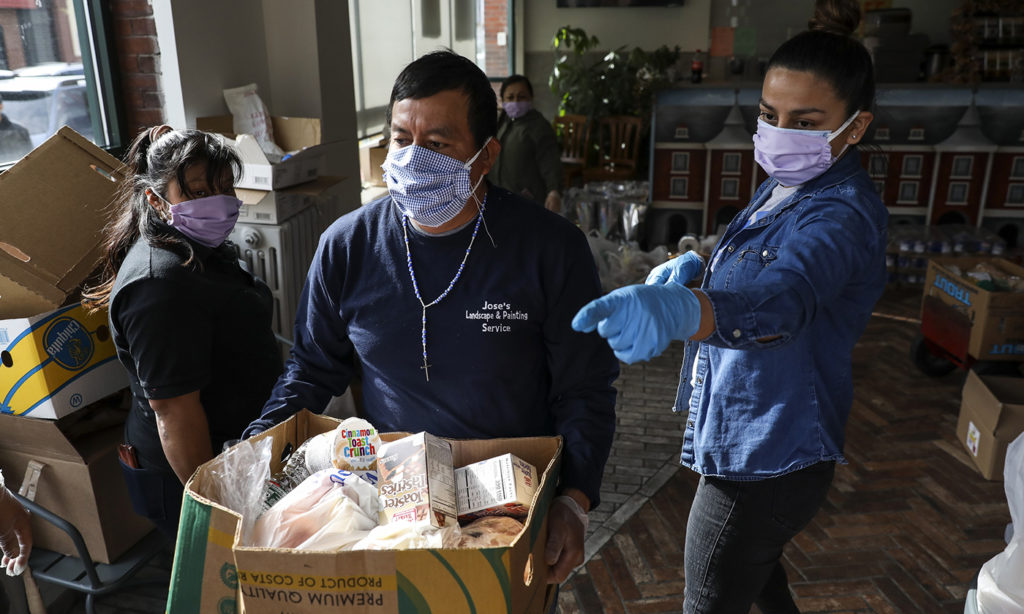 New Yorkers volunteering at mutual aid groups that assist neighbors in need during the pandemic should be eligible for the COVID-19 vaccine, Mayor Bill de Blasio declared Tuesday.

“People who are feeding their fellow New Yorkers, keeping people alive must be protected,” de Blasio told reporters. “It’s not easy work (and) does involve risk. We need to be there for them.”

He urged Gov. Andrew Cuomo to add the estimated hundreds of volunteers — as well as thousands of court employees, sanitation workers and lifeguards — to the Phase 1b rollout.

Cuomo — who is expected to be stripped of his emergency pandemic powers amid probes into nursing home deaths and allegations of sexual harassment — appears to have no immediate plan to expand the roster of people eligible. A state health department spokesperson did not respond to an email Tuesday.

De Blasio’s call for increasing the vaccination pool came as the number of inoculated city residents surpassed one million, according to THE CITY’s coronavirus tracker. The milestone came as President Joe Biden announced there is expected to be enough vaccines for every American adult by the end of May.

‘A Modicum of Protection’

On Monday, THE CITY reported that New Yorkers working and volunteering at nonprofits that help feed food-insecure people became eligible for the jabs — but mutual aid groups volunteers were left out.

“We’ve been operating without a lot of institutional protections,” said Ariadna Phillips, founder of the South Bronx Mutual Aid group.

“It would be lovely if there could be more widespread support in making sure that the folks that are taking care of our neighbors are also given something that at a minimum would offer a modicum of protection,” she added.

When the pandemic hit, mutual aid groups began to pop up all across the city. They initially focused on delivering food and modest sums of money to people.

Some of the groups have morphed into small relief powerhouses — offering everything from diapers to rides to vaccine appointments help to coat and toy drives.

At the peak of the pandemic, food insecurity surged from 1.2 million New Yorkers to 2.2 million, according to City Hall estimates. The city’s emergency food operations and nonprofit food pantries and meal delivery services have scrambled to meet demand.

The increasingly organized mutual aid outfits are widely credited with helping fill the gap amid persistent unemployment in many sectors nearly a year after the city went into lockdown.

But some mutual aid volunteers are also struggling and don’t have health insurance, said Phillips, noting that many of the unpaid do-gooders have gotten sick.

“There’s a lot of legwork that goes into making sure that our folks are taken care of,” Phillips said. “Everyone should have their basic needs met.”

‘We Depend on Them’

The Cuomo administration has gradually been adding more groups into the current eligibility phase.

The recent expansion of the vaccination-eligibility pool to include restaurant staffers and delivery people came after THE CITY pressed Cuomo on the issue.

Grocery and bodega staffers were already on the list of food workers eligible for the shots. Leaders of local nonprofits that help feed New Yorkers had lobbied for weeks to add their workers and volunteers to the eligibility category.

De Blasio is also pushing for the state to include lifeguards, court employees and sanitation workers.

“Our sanitation workers who have been heroes just did an amazing job during the snowstorm,” he said. “We depend on them. We need them to be healthy.”

The Cuomo administration, the mayor argued, is “not keeping up with the need to update this category, to update these eligibility categories.”