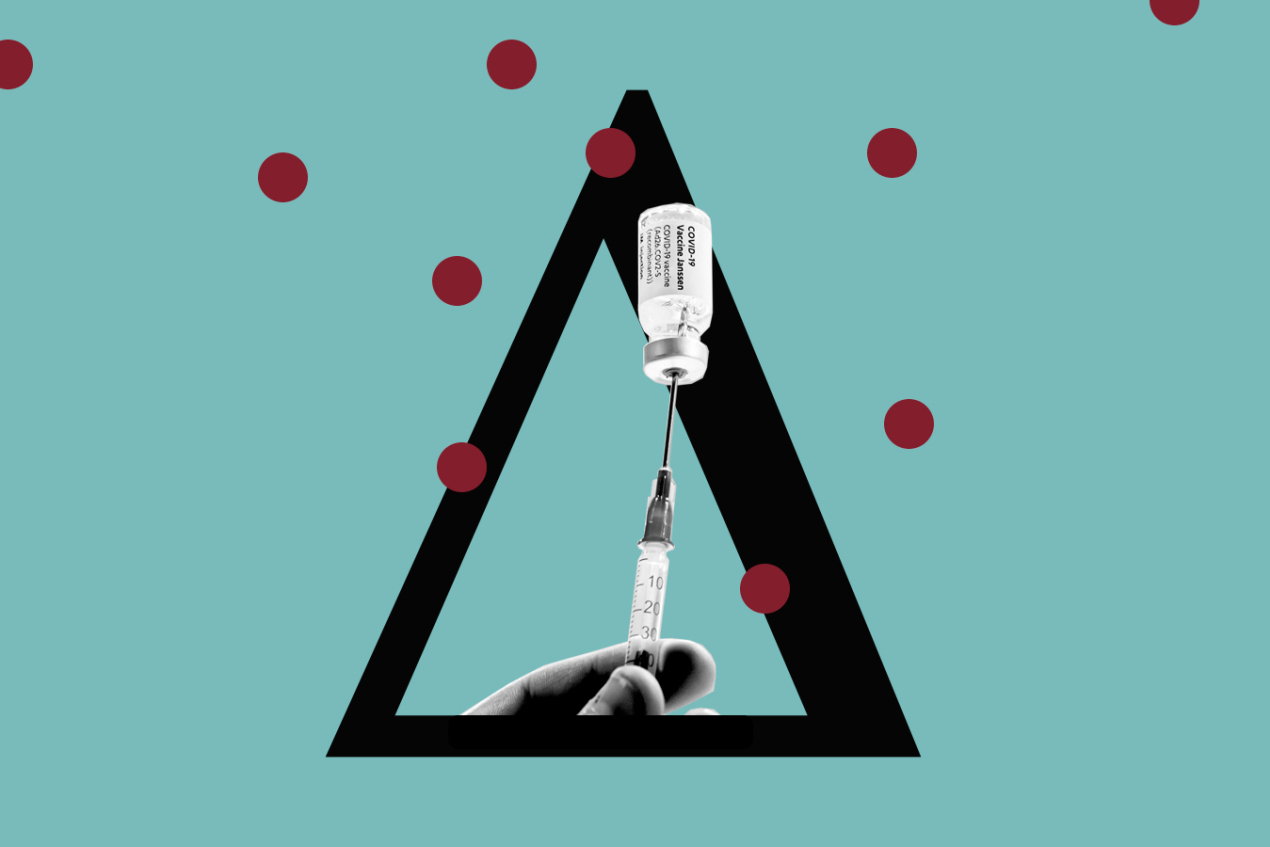 In the past two weeks, many medical experts started to question whether the Johnson & Johnson vaccine, which is administered in a single dose, would be as effective as the two-dose Pfizer-BioNTech or Moderna vaccine in protecting against the new, highly transmissible delta variant that is poised to become the dominant strain in the U.S.

The reason for their doubts were studies showing that the J&J vaccine was less effective at preventing disease than the other two vaccines and also less protective against variants. In recent days, several scientists and even members of the public who originally got J&J decided to get a “booster dose” of an mRNA vaccine, Pfizer-BioNTech or Moderna, to bolster their immune systems.

But data released Thursday night by Johnson & Johnson showed that the vaccine remains highly protective against the delta variant and immunity may be long-lasting.

“Those who got J&J should be less worried than they may have been before about delta,” said Dr. David Diemert, a professor of medicine at George Washington University who was not involved in J&J’s research. “It is reassuring.”

The Food and Drug Administration granted the J&J vaccine emergency use authorization in February on the heels of the Pfizer-BioNTech and Moderna vaccines. After a 10-day pause in April, triggered when the vaccine was found to be associated with rare but severe blood clots, distribution resumed. About 12 million Americans have received it so far.

Experts say the delta variant, first identified in India, is 40% to 60% more transmissible than other variants, meaning that unvaccinated people can more easily catch covid-19 and that those who have been vaccinated face a higher risk of breakthrough infections. The delta variant has also been associated with greater disease severity than other variants. In the U.S., it now accounts for about 25% of covid cases.

The Johnson & Johnson data released Thursday offered the first window into how well the J&J shot holds up against the delta variant.

“We believe that our vaccine offers durable protection against COVID-19 and elicits neutralizing activity against the Delta variant,” Dr. Paul Stoffels, chief scientific officer at Johnson & Johnson, said in a press release.

The data comes from two small-sample preprint studies, which have not yet been peer reviewed and were both conducted in laboratories.

One of the new studies showed that the J&J vaccine continued to produce a high number of antibodies in the presence of the delta variant. And the number was actually higher than what recent data had shown for antibody levels against the beta variant (first identified in South Africa).

The second study showed that the J&J vaccine’s immune response lasted at least eight months and that some types of immune cells increased over time. This immune response was found to provide protection even against the delta variant and other variants of concern.

This builds onto research from J&J’s clinical trial before its vaccine received authorization from the FDA. In that study, the vaccine was found to be 72% effective at preventing severe and moderate disease in the U.S. Part of the trial was also conducted in South Africa and Brazil, where variants were circulating as the vaccine was being tested. Those results were slightly lower than in the U.S. trials — 57% in South Africa and 66% in Latin American nations — but, overall, those percentages confirm a high degree of protection.

Still, those percentages were lower than what Pfizer-BioNTech and Moderna had reported in their trials — 95% and 94% effectiveness, respectively, at preventing symptomatic disease. Recent data suggests the two vaccines also protect against the delta variant.

That means that, while there is now some evidence that J&J is protective against the delta variant, its overall efficacy is still lower than that of Pfizer-BioNTech or Moderna, said John Moore, a professor of microbiology and immunology at the Weill Cornell Medical College in New York.

“I don’t think anything has changed about that,” said Moore. He had previously told KHN he thought J&J should be a two-dose vaccine, since it provides less protection than Pfizer and Moderna.

He also pointed out that, if you look closely at one of the new J&J studies, a single person did elect to get an mRNA dose after receiving J&J, which strongly boosted that person’s antibody response.

“That is just a one-off result,” said Moore. “But it is consistent with emerging data.”

Indeed, data from studies in the United Kingdom shows that following a single dose of the Oxford-AstraZeneca shot with a Pfizer-BioNTech shot offered an immunity boost. (The Oxford-AstraZeneca vaccine, authorized for use in the U.K. but not the U.S., operates through a similar mechanism as J&J, although two doses are required.)

Experts, though, also maintain that all the covid vaccines authorized for emergency use in the U.S. are very effective, especially compared with other types of vaccines. Flu vaccines have been found to have an average of 33% to 61% effectiveness, depending on the strain they protect against.

Still, Moore said those who got J&J should not pursue booster shots on their own but instead wait for guidance from the Centers for Disease Control and Prevention and FDA.

“If and when FDA and CDC approve a change in policy, then it looks to me entirely appropriate to consider using the mRNAs as a boost for J&J,” said Moore.

In a statement, the FDA said that J&J remains a single-dose shot and that no data is available yet on its interchangeability with other covid vaccines. The CDC said the agency is continuing “to monitor and evaluate COVID-19 vaccine effectiveness.”

Diemert said the data from J&J’s studies supports his view that at this time a booster shot isn’t necessary for those who got J&J.

“Now that we have data that is encouraging that the vaccine might be protective against delta and that the duration of protection is a thing, those two together are encouraging that a booster might not be needed,” said Diemert.

Dr. Robert Wachter, chair of the Department of Medicine at the University of California-San Francisco, said he doesn’t think an mRNA booster is necessary either — but he would still caution those who got J&J to be a bit more careful than those who received Pfizer-BioNTech or Moderna.

“The main difference would be definitely masking indoors (unless certain that everybody was vaccinated), whereas for mRNA vax recipient, I see that as more elective,” Wachter wrote in an email.

As for those who got J&J and have already gotten an mRNA booster shot? For some, the new findings come as a relief.

“These results are great news. I don’t find them surprising, but they are some of the data that was missing when I decided to take an mRNA booster,” said Jason Gallagher, a clinical pharmacy specialist in infectious diseases at Temple University Hospital in Philadelphia.

Gallagher said he might not have gotten a booster if the J&J results had been available a month ago, but he doesn’t regret his decision.

“This is an immunologic study suggesting that the vaccine will work against the delta variant, not a clinical study describing whether it did. I’m looking forward to learning more about that,” said Gallagher.

For those who are still considering getting an mRNA booster, it’s important to know that vaccine sites may ask whether you have already been vaccinated against covid. These sites have been instructed to administer vaccines according to CDC and FDA guidelines and have not been authorized to give additional shots to those who have already received a complete vaccine regimen.

Experts also emphasized that the best way to protect against the highly transmissible delta variant is to achieve a high vaccination rate across the U.S. When more people are vaccinated, the amount of circulating virus is reduced, which means everyone is better protected, including those who got the J&J shot.

Almost 67% of U.S. adults have received at least one vaccine dose, but only 47% of the total population is fully vaccinated. Rates of vaccination also vary widely by state. In other words, location has a lot to do with risk. Several Southeastern and Midwestern states, for instance, have less than 55% of their population vaccinated, meaning the delta variant could more easily sweep through those areas.

“All of the evidence on our currently authorized vaccines in the U.S. suggests they remain highly effective against preventing severe disease even against the variants,” said Dr. William Moss, executive director of the International Vaccine Access Center at Johns Hopkins University in Baltimore.