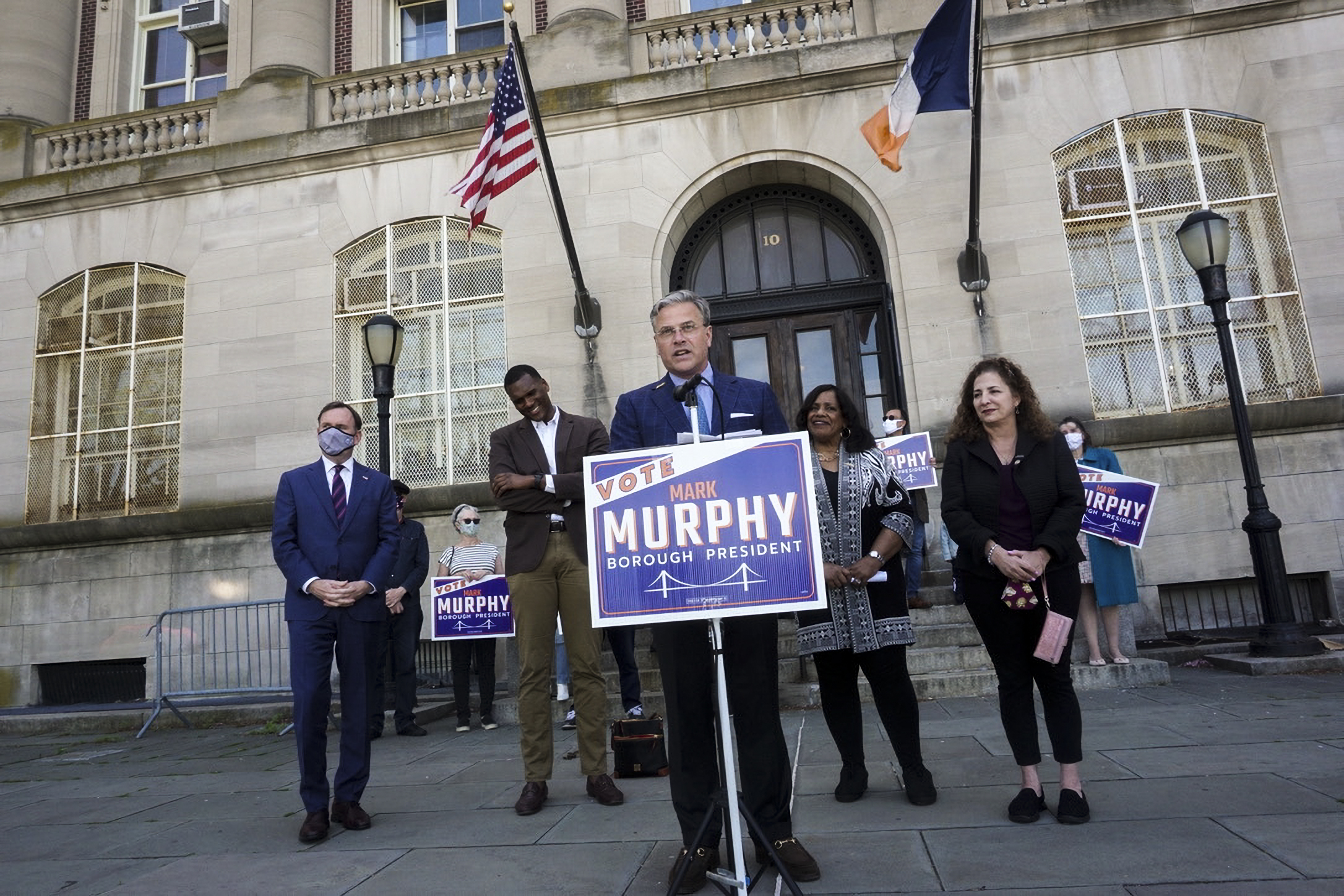 Mark Murphy, the Staten Island Democratic Party-backed candidate for borough president, is collecting signatures with two other Democrats to run in the general election on his new independent ballot line whose name echoes the Trumpian “America First” motto. Murphy wouldn’t say directly whether he’ll wage an active third-party run if he loses the June primary, responding, “I am a Democrat. I always support Democrats.”

That’s got Democrats concerned an independent ballot line could complicate the electoral math for the party’s nominee in the only borough that went for Donald Trump in the last two presidential elections and hasn’t voted in a Democrat for borough president since 1989.

“That’ll make it very difficult for a Democrat to win that seat, which is always going to be difficult because it’s Staten Island and Staten Island has not changed that much when it comes to who comes out and votes,” said Tom Scherbenko, a Democrat who ran against current Borough President James Oddo in 2017.

Murphy, who was endorsed Thursday by the borough’s Democratic delegation, told THE CITY that he’s creating the new ballot line to provide a space for himself and other candidates to move beyond the party labels of Democrat and Republican.

He also recruited Democrats Sal Albanese, a longtime politician seeking to return to the City Council, and Maria Novak, who is running for Civil Court judge, to join him on the line.

“The Staten Island Democratic-Republican dogfights of elections past have left our community fighting more against itself than for our home. We’ve been so distracted with our own civil wars we’ve let the other boroughs eat our lunch,” Murphy, who unsuccessfully ran for the borough’s congressional seat in 2012, said in a statement.

“For a long time I have been looking to create a unifying platform that all Staten Islanders can get behind,” he added. “Every last voter I’ve talked to this election yearns not for a left or right borough president.”

“Real change comes by electing candidates who are committed to improving outcomes for Staten Islanders and serving in the best interest of our community, not shameless self-promotion,” said Honor, an activist and small business owner. “This is a backroom tactic that serves only to further divide us in a time when we should be working towards unity. Staten Island Democrats deserve better and I truly hope that Mark reconsiders.”

In the past two election cycles, Democrats running for borough president won the nomination with little to no competition but didn’t fundraise enough to mount serious general election bids.

This year, five candidates are vying for the Democratic nomination in the borough’s first test of the of the new ranked choice voting system. Honor and Murphy are the only two of the hopefuls to qualify for public matching funds, and have $244,470 and $190,219 in their campaign coffers, respectively.

The Democratic race has attracted a diverse slate of candidates, including Cesar Vargas, a lawyer and immigration advocate; Radhakrishna Mohan, a labor leader and community board member; and Brandon Stradford, an HR professional.

Novak wasn’t immediately available for comment. Albanese, a former Brooklyn City Councilmember, said he will support the Democratic nominee no matter who wins the primary and believes Murphy would ultimately do the same.

“I think whoever wins the Democratic nomination, the person on the line, I believe will endorse a Democrat. I can’t tell you that 100%, but I think that will happen,” said Albanese, who ran a third-party mayoral campaign against Bill de Blasio in 2017.

Albanese, the lone Democrat running for the Mid-Island Council seat, said the long term goal for the ballot line would be for citywide politicians to sign on as a signal that they “would treat Staten Island more fairly.” Albanese has $170,178 remaining in his campaign account.

Two of the six Republicans vying to challenge him, Marko Kepi and David Carr, have raised more. Kepi, who ran for Congress last year, has $202,977 remaining and Carr has $190,448.

“We only have three Council members rather than the other boroughs who have a lot more folks representing them and that often leads to a shortage of resources for the Island,” said Albanese. “It’s a statement that we feel needs to be made and having a ballot line that says ‘Staten Island First’ allows Staten Islanders to express their views on how the city treats its smallest borough.”

If Murphy wins the Democratic primary, the “Staten Island First” branding could attract additional voters to his bid on Staten Island. In 2017, now-Rep. Nicole Malliotakis (R-Staten Island, Brooklyn) got 810 Staten Islanders to vote for her for mayor on her independent ballot line, which she dubbed “Stop de Blasio.”

“So candidates now are trying to build up these unaffiliated parties because the largest group of voters are people that really aren’t that happy with either Democratic or Republican parties so there’s that appeal that this is outside of the box,” said Scherbenko.

Either way, Murphy’s name will appear on the ballot if his campaign gathers 1,750 valid signatures from voters — a process called petitioning — and then submit them to the city Board of Elections by May 25.

That means that a candidate running independently has to make up their mind to do so well before the June 22 primary.

“You have to decide now and collect your independent nominating petitions,” noted Sarah Steiner, a veteran New York election attorney.

For Democrats, this isn’t the first wrinkle in the crowded primary race for Staten Island borough president. As THE CITY reported last month, challengers cried foul when two individuals filed petition objections against all of the candidates despite four of the five candidates –– sans Murphy –– signing on to pledges not to do so.

Republicans on Staten Island may have their own third-party dilemma in the crowded GOP primary for borough president.

Leticia Remauro, a Republican, told THE CITY that she’s vowing to continue her race for borough president on the Conservative ballot line regardless of what happens in the three-way GOP primary race in June. That ballot line provided over 9,000 votes for Oddo in 2017 and over 6,000 votes in 2013.

“There’s nothing that can be done about it. I have that Conservative line and I can’t give it up,” said Remauro. “I am the conservative Republican in this race so to take somebody’s line and not commit to running the race all the way through is disingenuous.”