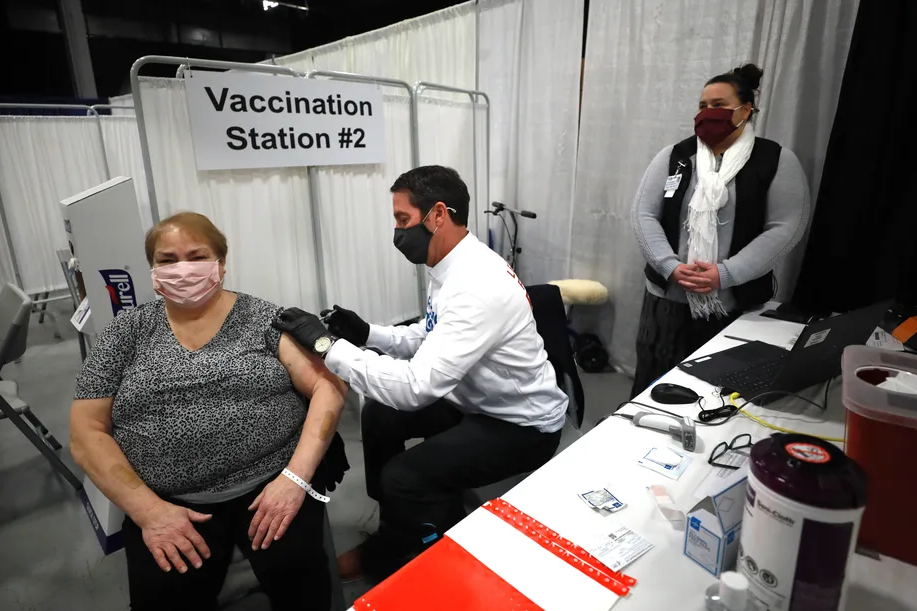 Newark will soon require teachers to get vaccinated against COVID-19 or face weekly testing, the teachers union told members Thursday.

The school district has not announced a vaccine mandate, but union leaders said such a requirement is likely. To date, less than a third of district employees have provided proof of COVID vaccination, officials said, even as Newark classrooms are set to open in less than a month.

“Like California, and soon to be NJ and Newark, be prepared for vaccine mandates upon returning to work,” said Newark Teachers Union President John Abeigon in an email to members. The mandate: “be vaccinated or get tested once a week at your own (co-pay) expense.”

Vaccine requirements are gaining steam as the highly contagious delta variant fuels a COVID resurgence, and a rising number of children are getting infected.

This week, California became the first state to require teachers to get vaccinated before returning to school or submit to weekly testing, and Chicago announced plans to do the same. On Thursday, the nation’s largest teachers unions signaled their support for such policies.

New Jersey Gov. Phil Murphy said this week the state is considering whether to require teachers to get vaccinated or tested weekly, and Newark Mayor Ras Baraka signed an executive order Tuesday requiring city employees to get inoculated against COVID.

Abeigon said a similar mandate is likely in store for teachers in Newark’s school district, where in-person learning is scheduled to resume Sept. 7.

“I think it’s only a matter of time,” he said, adding that the union told district officials it would support a vaccine-or-weekly-testing requirement for school workers. “The NTU has been pushing for mandatory vaccinations for students and staff since the vaccines were approved.”

A district spokesperson did not respond to multiple emails. During an appearance on the mayor’s online COVID briefing last week, Superintendent Roger León said COVID vaccines were not mandatory for district staffers. But Abeigon said there is no doubt the district is mulling a mandate.

“We know that they’re considering it because they had a discussion with us,” he said Thursday, adding that he wasn’t sure why the district has yet to impose a mandate. “I don’t know what they’re waiting for.”

Newark’s largest charter school operators have not imposed vaccine mandates yet, but some are considering doing so. For now, North Star Academy said all unvaccinated teachers must undergo weekly testing, and KIPP New Jersey said all employees must get tested each week.

With schools nationwide beginning to reopen amid the latest surge of COVID cases, pressure is mounting for teachers who have yet to get vaccinated to do so.

The National Education Association, which says the vast majority of its three million members already are immunized, on Thursday endorsed policies that require teachers to get vaccinated or submit to weekly testing. New Jersey recently instituted that policy for workers in “high-risk settings” such as hospitals and prisons, and the state’s largest teachers union said it would support a similar mandate for educators.

“If the governor’s executive order requiring vaccination or regular testing in certain other sectors is extended to schools, we will work to ensure that it is implemented in a way that protects the health and welfare of everyone involved,” said New Jersey Education Association spokesperson Steve Baker in an email.

Noting that the union has heavily promoted the COVID vaccines, he added, “Vaccination is the best tool we have to better protect our schools and communities.”

Newark’s union is an affiliate of the other major educators union, the American Federation of Teachers. Its leadership encouraged local unions to negotiate vaccine mandates with school districts.

While “we still believe the best way to increase vaccinations is through education and voluntary adoption,” AFT President Randi Weingarten said in a statement Thursday, “we want to be in a position to work with our employers on workplace vaccination policies.”

The reported COVID vaccination rate for Newark Public Schools employees is strikingly low. Only 2,000 or so of the district’s roughly 6,300 employees have been immunized, León said last week. That roughly 32% rate is far below the 58% of adults in Newark and 72% across New Jersey who are fully vaccinated.

But Abeigon cautioned that the district’s figure only includes employees who have uploaded their vaccination cards into an online system. The actual number of immunized employees is much higher, he said, adding that the union’s internal surveys suggest most of its members have had the shots.

“The large majority of them are already vaccinated,” he said. “You didn’t need to tell them twice.”

Still, he conceded that some educators remain hesitant. When Chalkbeat informally polled Newark parents and educators in February, most said they planned to get the vaccine — but a few said they worried about possible side effects or that the vaccines were rolled out too quickly.

“I feel that more testing and research needs to be done first,” one pre-K teacher wrote to Chalkbeat, saying she had “no intention” of getting the vaccine. “I feel like it is an overnight cure and that those getting it now are lab rats.”

Studies have consistently found the COVID vaccines to be safe and highly effective, and more than 350 million doses have been given in the U.S.

As colleges and other institutions require COVID vaccination, some people are buying fake vaccine cards online, which the FBI has warned poses health and legal risks. In his message to members, Abeigon warned anyone who decides not to get immunized against misrepresenting their status.

“Anyone thinking of using a Fake Vaccination ID purchased over the Internet or elsewhere—don’t!” Abeigon wrote. “If discovered, the district will refer these cases to the county prosecutor and you will be prosecuted to the fullest extent of the Law, and that may include loss of tenure and pension.”

Yet the union president also praised his members for following safety protocols when classrooms partially reopened this spring, which he said kept in-school infections to a minimum.

“I think we’ve been doing a great job under the circumstances and our reward has been these low numbers,” Abeigon said in his message to members. “With some planning, prayer and research we can have as safe a return as possible.”