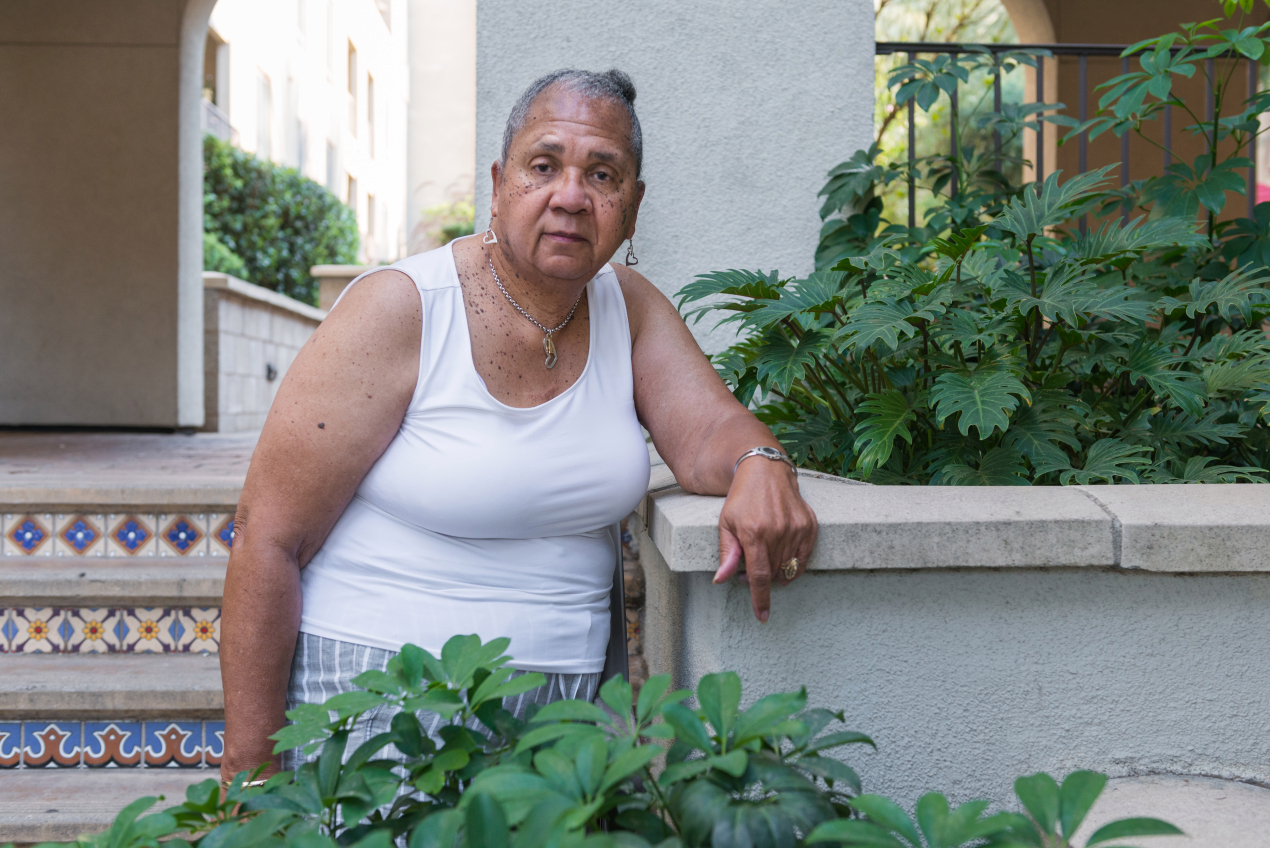 With a mix of relief and caution, older adults fully vaccinated against covid-19 are moving out into the world and resuming activities put on hold during the pandemic.

Many are making plans to see adult children and hug grandchildren they haven’t visited for months — or longer. Others are getting together with friends indoors, for the first time in a long time.

People are scheduling medical appointments that had been delayed and putting trips to destinations near and far on calendars. Simple things that felt unsafe pre-vaccination now feel possible: petting a neighbor’s dog, going for a walk in the park, stopping at a local hangout for a cup of coffee.

“I feel I can breathe again,” said Barry Dym, 78, of Lexington, Massachusetts, expressing a widely shared sense of freedom.

The rapid rollout of covid vaccines to people 65 and older makes this possible. As of Monday, nearly 49% of seniors in the U.S. had been fully vaccinated, while nearly 73% had received one dose of the Moderna or Pfizer-BioNTech vaccine. (A third vaccine, from Johnson & Johnson, became available earlier this month and requires just one dose.)

Recent guidance from the Centers for Disease Control and Prevention recognizes the protection that vaccines offer. According to the CDC, people who are fully vaccinated can meet indoors without masks, without incurring significant risk. Also, they can visit relatively safely with people who haven’t been vaccinated, so long as those individuals are healthy and gatherings remain small.

How are older adults who’ve been fully vaccinated — a privileged group, to be sure, given the millions of seniors who’ve yet to get shots — balancing a desire to shed isolation with a need to stay safe amid a pandemic that’s not yet over? I asked several people I’ve spoken with previously about their plans and their reflections on the difficult year we’ve been through.

Mardell Reed, 80, of Pasadena, California, told me she wasn’t sure she’d get the vaccine originally, because “I was concerned about the process going so fast and drug companies maybe producing something that wasn’t up to par.” But she changed her mind “once we all started hearing from actual scientists rather than politicians.”

Now, Reed tries to educate people she knows who remain reluctant to get the shots. One of them is her 83-year-old stepsister. “No one had explained anything about the vaccines to her,” Reed told me. “I talked about all the things that would be possible — seeing her daughter, who lives up north, seeing more of her grandkids, and I think that convinced her.”

Reed used to walk in her neighborhood regularly before the pandemic but stopped when she became afraid of being around other people. Reviving that habit is a goal.

Among Reed’s other priorities in the months ahead: visiting with her daughter, grandchildren and great-grandchildren, and seeing her primary care physician, a dentist, a neurologist who’s treating nerve damage and an eye doctor. “I didn’t want to go to places where people might be sick this last year; now, it’s time for me to catch up on all that,” she said.

Harry Hutson, 73, and his wife, Mikey, 70, invited two couples to their house in Baltimore, on separate nights, after getting their second Moderna shots in February and waiting two weeks. “We’re going right into having safe dinners with people who’ve been vaccinated,” Hutson told me.

He feels a touch of lingering uncertainty, however. “While we’re 95% sure this is the right thing to do, we’re a little tentative. For a whole year, we’ve had ‘Covid is death’ engrained in us. After that, you can’t just go back to normal, just like that,” he said.

Hutson has continued working as an executive coach during the pandemic and has recently been giving talks on hope to business groups, nonprofit organizations and churches. “What I tell people is ‘You’ll help yourself by helping others.’ We’re all emerging from trauma and healing has to be a collective, not an individual, endeavor.”

On a personal note, Hutson is going through an attic full of yearbooks, letters and photos, “curating my family’s history.” He hopes to make an across-the-country road trip with his wife later this year visiting the family of his wife’s son in Madison, Wisconsin, his daughter’s family in Portland, Oregon, and his brother in Eugene, Oregon, as well as several friends.

Marian Hollingsworth, 67, of La Mesa, California, spent last spring and summer sequestered at home with her husband, Ed, 72, who had stomach cancer, focused on keeping Ed safe from the coronavirus. But his illness progressed and, in early October, Ed died at home, where the couple’s four adult children had gathered to say goodbye.

Since then, Hollingsworth’s son Morgan, 27, who lives in New York City, has stayed with his mom, keeping her company. But grief struck hard: Hollingsworth lost weight and couldn’t sleep at night despite profound fatigue. “It was like getting hit by the biggest Mack truck you could find,” she told me.

The pandemic’s resurgence in the fall and winter made adjusting to Ed’s loss “even more of a challenge,” Hollingsworth said, since she couldn’t get together with friends or get hugs — a form of contact she longed for. To this day, his clothes hang in the closet because the places she’d like to send them aren’t accepting donations.

When Hollingsworth became fully vaccinated in early March, she said, she felt for the first time that “my head was coming up above water.” Although she’s not sure, yet, how much she wants to go out and see people, she’s looking forward to simple pleasures: petting the neighbor’s dog and going on “distanced walks” with a few friends. “I’m going to be cautious until there’s more clarity about what’s really safe,” she told me.

Wilma Jenkins, 82, who lives in South Fulton, Georgia, has struggled with depression off and on for years — a challenge she’s spoken about publicly in talks to older adults. This fall and winter, isolated at home, “it’s been rough for me — it’s just been so sad,” she admitted.

Even though Jenkins describes herself as an “introvert,” she made sure she had regular social contact before the pandemic. Most days, she’d take herself out to lunch at local restaurants, chatting with the wait staff and other regular customers.

One of Jenkins’ great loves is music — the blues and jazz. A few days after we spoke, she was planning to return to her favorite nightclub, St. James Live in Atlanta, to catch a show — her first such outing since becoming fully vaccinated in mid-February.

“I’m not afraid to move back into the world, but I will continue to be masked and socially distanced and wash my hands,” she told me.

Jenkins plans to start walking outside again; go to restaurants, so long as they’re not too crowded; and resume visits with her two daughters, both physicians, who live in Atlanta and Washington, D.C. Her most ambitious goal: flying out to San Diego in late July for a celebration marking her grandson Jamal’s retirement from the Navy.

Barry Dym is haunted by an image that’s recurred often during the past year: He’s on a moving sidewalk, unable to get off, being hurried to a destination he doesn’t want to reach: old age. The image is associated with the pandemic and knee pain that has worsened, painfully, over the past six months, making walking harder.

This past year was a time of adjustment for Dym, who retired four years ago from his work as a consultant to nonprofit organizations. “One of the lessons of covid for me was I still need to feel useful and I love helping people. I realized maybe I’d pulled back too far.”

So, Dym expanded his coaching and mentoring practice — an activity he plans to continue. “Whatever I can do to help make this world better, I’m not going to stop trying,” he said.

Outside of travel plans with his wife, Franny — to the Florida Keys this spring, to the Berkshires in western Massachusetts in the summer, and perhaps to Israel in the fall — Dym said he finds himself “more curious than anything” about what lies ahead. “I really don’t know what my life will be like. I’ll have to find out.”