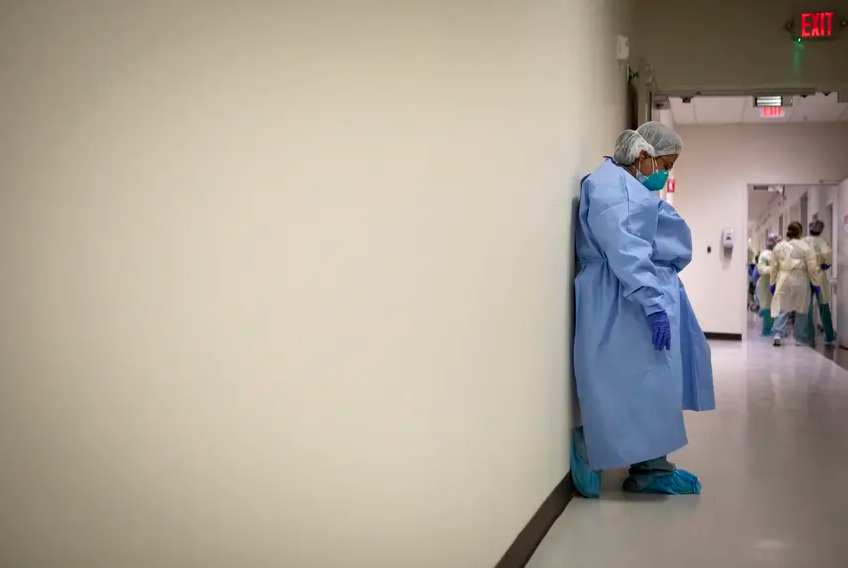 Pandemic forecasters in Texas say the state’s current surge of omicron infections and hospitalizations is likely to get much worse before it gets better, with hospitalizations expected to continue climbing for at least three weeks if social behaviors don’t change and slow the trend.

Across the nation, hospitalizations are already on the verge of breaking new pandemic records. In Texas on Thursday, according to state data, about 9,200 people were hospitalized with COVID-19 — far short of the record 14,218 hospitalizations from Jan. 11, 2021.

But with current numbers climbing exponentially each week, hospitalizations of Texans with COVID are likely to follow national trends and surpass previous levels in the state before they start to decline, said Anass Bouchnita, a researcher at the University of Texas COVID-19 Modeling Consortium, which uses data and research to project the path of the pandemic nationally.

That trend is likely to continue for at least another week, Bouchnita said.

“The situation in Texas is that it probably won’t reach the peak [for cases] until the second half of January,” he said.

Experts say the extremely high case count is why so many people are showing up in the hospital even as medical evidence suggests that the omicron variant — responsible for most new and active cases in Texas — is less severe than the previously dominant delta variant.

Bouchnita talked to The Texas Tribune on Friday, the same day the UT consortium released a report with the research team’s latest calculations about omicron’s projected path nationally. The report, which looked at eight scenarios in which omicron had varying degrees of severity, infectiousness and resistance to immunity, suggests the nation could see its new cases of this more contagious but less severe strain peak by mid-January before decreasing by half in early February.

The report called the current surge the largest COVID-19 wave in the United States to date.

In South Africa, where omicron overtook delta in late November, health officials are saying their current surge appears to be on the decline.

But in Texas, where political battles rage over curve-flattening protocols such as masking rules and vaccine mandates, daily new infections and hospitalizations are expected to continue climbing for several more weeks and may not start declining until February, after national numbers crest, said Bouchnita, a lead researcher on the group’s omicron modeling project.

In a worst-case scenario, hospitalizations across the nation could get up to three times the levels seen a year ago during the previous peak, he said. The team’s research did not determine whether Texas numbers would reach that high, just when they might reach their peak, Bouchnita said.

With weeks to go before the surge is expected to start abating, it’s difficult for providers to be optimistic that the records still won’t be broken.

“I see these numbers, and I think, ‘Oh my God, here we go again,” said Dr. Jennifer Liedtke, a physician at Rolling Plains Memorial Hospital and the local county health authority in Sweetwater, west of Abilene. “The last two surges were really tough.”

Until recent weeks, her hospital was seeing about five new positive results a day among the tests being performed on patients. Right before the new year, the hospital’s in-house lab had 65 new positives in one day, she said.

The ground battle in Texas against the most contagious strain of the virus yet is pushing an already exhausted health care system closer to its limits, with federal agencies stepping in to help with an enormous demand for COVID-19 testing and the state sending thousands of nurses to metro areas to help overwhelmed hospitals.

Intensive care units at more than 50 hospitals are at 100% capacity, according to state reports, and some regions of the state, including El Paso, are reporting no ICU beds available in the area.

Already, the state’s children’s hospitals have more patients with COVID-19 in their beds than at any other time in the pandemic — 351 statewide on Thursday, which is higher than the last peak during the delta variant surge of 345 in early September.

After causing a deadly surge over the summer, delta has now fallen largely off the radar in Texas, accounting for fewer than 10% of new and active cases, according to health officials.

Since the first official reports of omicron surfaced in Texas in early December, positivity rates in Texas skyrocketed to 36% of all tests being administered — the previous record was 21% during last winter’s surge. In most of Texas’ 254 counties, daily new cases are climbing. Meanwhile, short-staffed physicians offices, clinics, and hospitals are under increasing pressure from an unprecedented number of cases among patients and staff — a number that was exacerbated even further by the winter season and holiday travel.

“It seems like another tidal wave,” said Castroville physician Dr. Mary Nguyen, whose small family practice outside San Antonio is getting inundated with patients who need treatment for symptoms or are seeking tests in addition to regular non-COVID treatment.

The UT projections suggest that, nationally, average daily death tolls may not reach previous peak levels if omicron is less severe than delta, as it appears to be.

But the threat to the health care system is real if record numbers of Texans continue to inundate hospitals that are already strained after two years of being battered by pandemic waves.

If Texans step up their social distancing and masking behaviors, the state could peak at lower numbers, and several weeks sooner, Bouchnita said.

And if that happens, Texans could start to see decreases in new cases and hospitalizations before the end of the month, he said.

Whether residents become more compliant with those strongly recommended protocols is harder to project, Bouchnita said.

“This is something that we just can’t describe with our mathematical models,” he said. “How people are going to behave.”