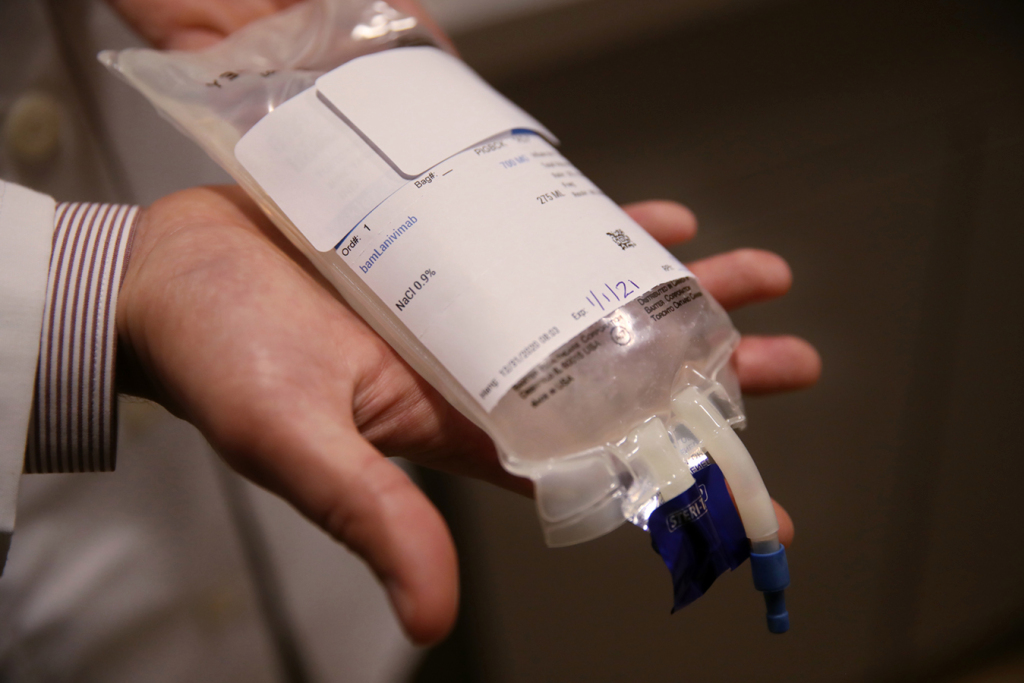 By the time he tested positive for covid-19 on Jan. 12, Gary Herritz was feeling pretty sick. He suspects he was infected a week earlier, during a medical appointment in which he saw health workers who were wearing masks beneath their noses or who had removed them entirely.

His scratchy throat had turned to a dry cough, headache, joint pain and fever — all warning signs to Herritz, who underwent liver transplant surgery in 2012, followed by a rejection scare in 2018. He knew his compromised immune system left him especially vulnerable to a potentially deadly case of covid.

On Twitter, Herritz had read about monoclonal antibody therapy, the treatment famously given to President Donald Trump and other high-profile politicians and authorized by the Food and Drug Administration for emergency use in high-risk covid patients. But as his symptoms worsened, Herritz found himself very much on his own as he scrambled for access.

His primary care doctor wasn’t sure he qualified for treatment. His transplant team in Wisconsin, where he’d had the liver surgery, wasn’t calling back. No one was sure exactly where he should go to get it. From bed in Pascagoula, Mississippi, he spent two days punching in phone numbers, reaching out to health officials in four states, before he finally landed an appointment to receive a treatment aimed at keeping patients like him out of the hospital — and, perhaps, the morgue.

“I am not rich, I am not special, I am not a political figure,” Herritz, a former community service officer, wrote on Twitter. “I just called until someone would listen.”

Months after Trump emphatically credited an experimental antibody therapy for his quick recovery from covid and even as drugmakers ramp up supplies, only a trickle of the product has found its way into regular people. While hundreds of thousands of vials sit unused, sick patients who, research indicates, could benefit from early treatment — available for free — have largely been fending for themselves.

Federal officials have allocated more than 785,000 doses of two antibody treatments authorized for emergency use during the pandemic, and more than 550,000 doses have been delivered to sites across the nation. The federal government has contracted for nearly 2.5 million doses of the products from drugmakers Eli Lilly and Co. and Regeneron Pharmaceuticals at a cost of more than $4.4 billion.

So far, however, only about 30% of the available doses have been administered to patients, federal Department of Health and Human Services officials said.

Scores of high-risk covid patients who are eligible remain unaware or have not been offered the option. Research has shown the therapy is most effective if given early in the illness, within 10 days of a positive covid test. But many would-be recipients have missed this crucial window because of a patchwork system in the U.S. that can delay testing and diagnosis.

“The bottleneck here in the funnel is administration, not availability of the product,” said Dr. Janet Woodcock, a veteran FDA official in charge of therapeutics for the federal Operation Warp Speed effort.

Among the daunting hurdles: Until this week, there has been no nationwide system to tell people where they could obtain the drugs, which are delivered through IV infusions that require hours to administer and monitor. Finding space to keep covid-infected patients separate from others has been difficult in some health centers slammed by the pandemic.

“The health care system is crashing,” Woodcock told reporters. “What we’ve heard around the country is the No. 1 barrier is staffing.”

At the same time, many hospitals have refused to offer the therapy because doctors were unimpressed with the research federal officials used to justify its use.

Monoclonal antibodies are lab-produced molecules that act as substitutes for the body’s own antibodies that fight infection. The covid treatments are designed to block the SARS-CoV-2 virus that causes infection from attaching to and entering human cells. Such treatments are usually prohibitively expensive, but for the time being the federal government is footing the bulk of the bill, though patients likely will be charged administrative fees.

Nationwide, nearly 4,000 sites offer the infusion therapies. But for patients and families of people most at risk — those 65 and older or with underlying health conditions — finding the sites and gaining access has been almost impossible, said Brian Nyquist, chief executive officer of the National Infusion Center Association, which is tracking supplies of the antibody products. Like Herritz, many seeking information about monoclonals find themselves on a lone crusade.

“If they’re not hammering the phones and advocating for access for their loved ones, others often won’t,” he said. “Tenacity is critical.”

As of this week, all states are required to list on a federal locator map sites that have received the monoclonal antibody products, HHS officials said. The updated map shows wide distribution, but a listing doesn’t guarantee availability or access; patients still need to check. It’s best to confer with a primary care provider before reaching out to the centers. For best results, treatment should occur as soon as possible after a positive covid test.

Some health systems have refused to offer the monoclonal antibody therapies because of doubts about the data used to authorize them. Early studies suggested that Lilly’s therapy, bamlanivimab, reduced the need for hospitalization or emergency treatment in outpatient covid cases by about 70%, while Regeneron’s antibody cocktail of casirivimab plus imdevimab reduced the need by about 50%.

But those studies were small, just a few hundred subjects, and the results were limited. “A lot of doctors, actually, they’re not impressed with the data,” said Dr. Daniel Griffin, an infectious disease expert at Columbia University who co-hosts the podcast “This Week in Virology.” “There really is still that question of, ‘Does this stuff really work?’”

As more patients are treated, however, there’s growing evidence that the therapies can keep high-risk patients out of the hospital, not only easing their recovery but also decreasing the burden on health systems struggling with record numbers of patients.

Banking on observations from Mayo experts and others, federal officials have been pushing for wider use of antibody therapies. HHS officials have partnered with hospitals in three hard-hit states — California, Arizona and Nevada — to set up infusion centers that are treating dozens of covid patients each day.

One of those sites went up in late December at El Centro Regional Medical Center in California’s Imperial County, an impoverished farming region on the state’s southern border that has recorded among the highest covid infection rates in the state. For months, the medical center strained to absorb the overwhelming influx of patients, but chief executive Dr. Adolphe Edward said a new walk-up infusion site has already put a dent in the covid load.

More than 130 people have been treated, all patients who were able to get the two-hour infusions and then recuperate at home. “If those folks would not have had the treatment, they would have come through the emergency department and we would have had to admit the lion’s share of them,” he said.

It’s important to make sure people in high-risk groups know to seek out the therapy and to get it early, Edward said. He and his staff have been working with area doctors’ offices and nonprofit groups and relying on word-of-mouth.

“On multiple levels, we’re saying, ‘If you’ve tested positive for the virus, come and let us see if you are eligible,’” Edward said.

Greater awareness is a goal of the HHS effort, said Dr. John Redd, chief medical officer for the assistant secretary for preparedness and response. “These antibodies are meant for everyone,” he said. “Everyone across the country should have equal access to these products.”

For now, patients like Herritz, the Mississippi liver transplant recipient, say reality is falling well short of that goal. If he hadn’t continued to call in search of a referral, he wouldn’t have been treated. And without the therapy, Herritz believes, he was just days away from hospitalization.

“I think it’s horrible that if I didn’t have Twitter, I wouldn’t know anything about this,” he said. “I think about all the people who have died not knowing this was an option for high-risk individuals.”