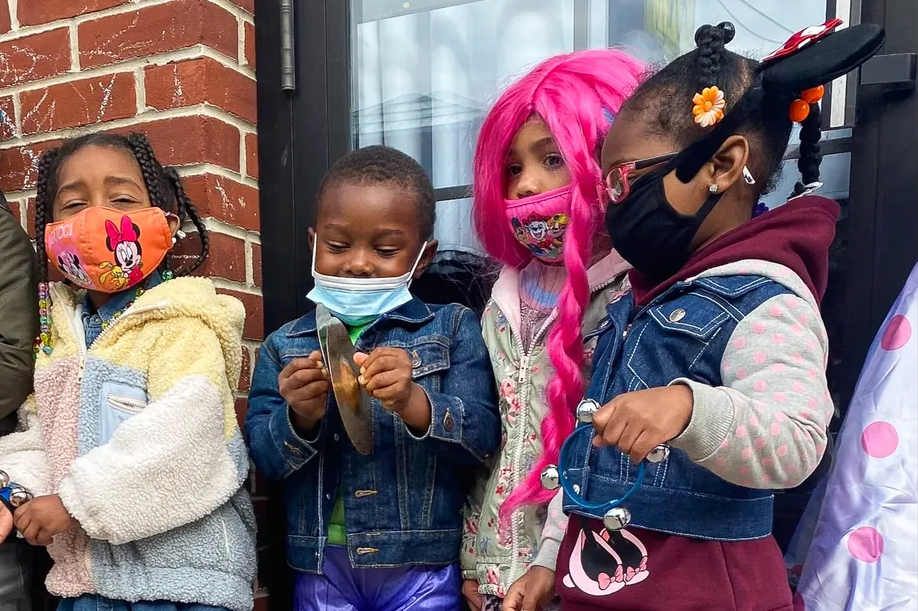 Parent Danielle Ruffin thinks every Pennsylvania child deserves a preschool program like the one her 4-year-old daughter Novah attends inside a small brick building in North Philadelphia.

Young World Early Learning Center, which recently earned the state’s top rating, is a place where the director knows every child’s name, all preschool teachers have bachelor’s or master’s degrees, and students dive deeply into topics — from trees to clothing — for weeks at a time.

“It’s amazing,” said Ruffin, who has visited many preschools around the city in her work as a speech pathologist serving young children. “One of the best centers I have been in.”

But more than half of Pennsylvania 3- and 4-year-olds don’t have access to public preschool programs like Ruffin’s daughter does. There simply aren’t enough slots, even with slow-but-steady state funding increases over the past several years.

Advocates say federal money will be key to creating a universal preschool program in Pennsylvania — one capable of reaching the state’s nearly 300,000 preschool-age children. Now, for the first time, that federal influx is a distinct possibility as lawmakers debate President Biden’s massive social spending bill, which includes billions for preschool nationwide.

“If something like Build Back Better goes through, that’s a lot more money that’s going to be available to serve a lot more kids,” said Jen DeBell, executive director of the Pennsylvania Association for the Education of Young Children, referring to Biden’s $1.75 trillion social spending package.

DeBell’s organization is one of several members of a statewide coalition called Pre-K for PA that’s pushed for increased access to high-quality preschool.

While early childhood education often garners bipartisan support, Biden’s social spending package, which would also fund health provisions, tax credits, and workforce programs, has no Republican support in the evenly divided Senate. At least one Democrat hasn’t signed on either.

She said if a major federal infusion for preschool materializes, Pennsylvania will be well-situated to build on Pre-K Counts, the largest of several government-funded preschool programs in the state. Currently, Pre-K Counts serves around 29,000 children statewide and is available to families with incomes up to 300% of the federal poverty level — about $79,000 a year for a family of four.

While Pre-K Counts’ eligibility criteria would likely need to change if the state shifts to universal preschool, the essential infrastructure is already in place, said DeBell. In addition, the program, like Biden’s plan, emphasizes high-quality classrooms and offerings both inside schools and at community sites.

Ruffin said she sees too many preschool kids in low-quality programs around Philadelphia.

She provides speech therapy to a little boy who’s always on his iPad when she arrives at his center, where he’s the oldest child and often appears bored. He enjoys the weekly one-on-one sessions with Ruffin, but pouts when they’re over.

“He’s missing out on beautiful days of just sparking up that brain,” she said. “If there were a Head Start or Pre-K Counts [program] in the area, that would be a game-changer.”

In addition to Pre-K Counts, Pennsylvania uses state money to fund about 8,000 preschool slots through Head Start, a federally funded program for children from low-income families. Since 2017, Philadelphia has had its own free preschool program, funded with a tax on soda and sugary drinks. Last year, the program included more than 3,000 slots.

While many early childhood advocates and preschool providers in Pennsylvania say they’d welcome a major preschool expansion, they caution that the details of the plan matter.

“People were really angry about the way it was expanded and the way community-based programs were treated,” she said. “We don’t have to make the same mistake in Pennsylvania.”

Miksic, whose organization is also part of Pre-K for PA, said it’s important to continue state-level momentum for preschool expansion because even if new federal preschool funding is approved, state lawmakers will have to opt in and possibly provide additional state funding as the effort phases in.

Keshia Bell-Jones, director of the Young World center, which offers infant and toddler slots in addition to preschool, said she’d like to see more money put toward compensating staff fairly. Currently, her lead preschool teachers, some of whom have been there for more than a decade, make $45,000 to $60,000 a year.

“We have teachers that are barely making ends meet,” she said.

In addition, she said classrooms need extra staff to deal with the disruption and trauma of COVID. Ratios of one staff member for every 10 preschoolers, as the state requires, aren’t enough to deal with the challenging behavior some children are showing these days.

“Does it take into consideration what we’ve all been through over two years with COVID? No, it doesn’t.” said Bell-Jones. “The teachers really need to have support.”

This article was originally posted on Pennsylvania could get universal preschool. Here’s how.