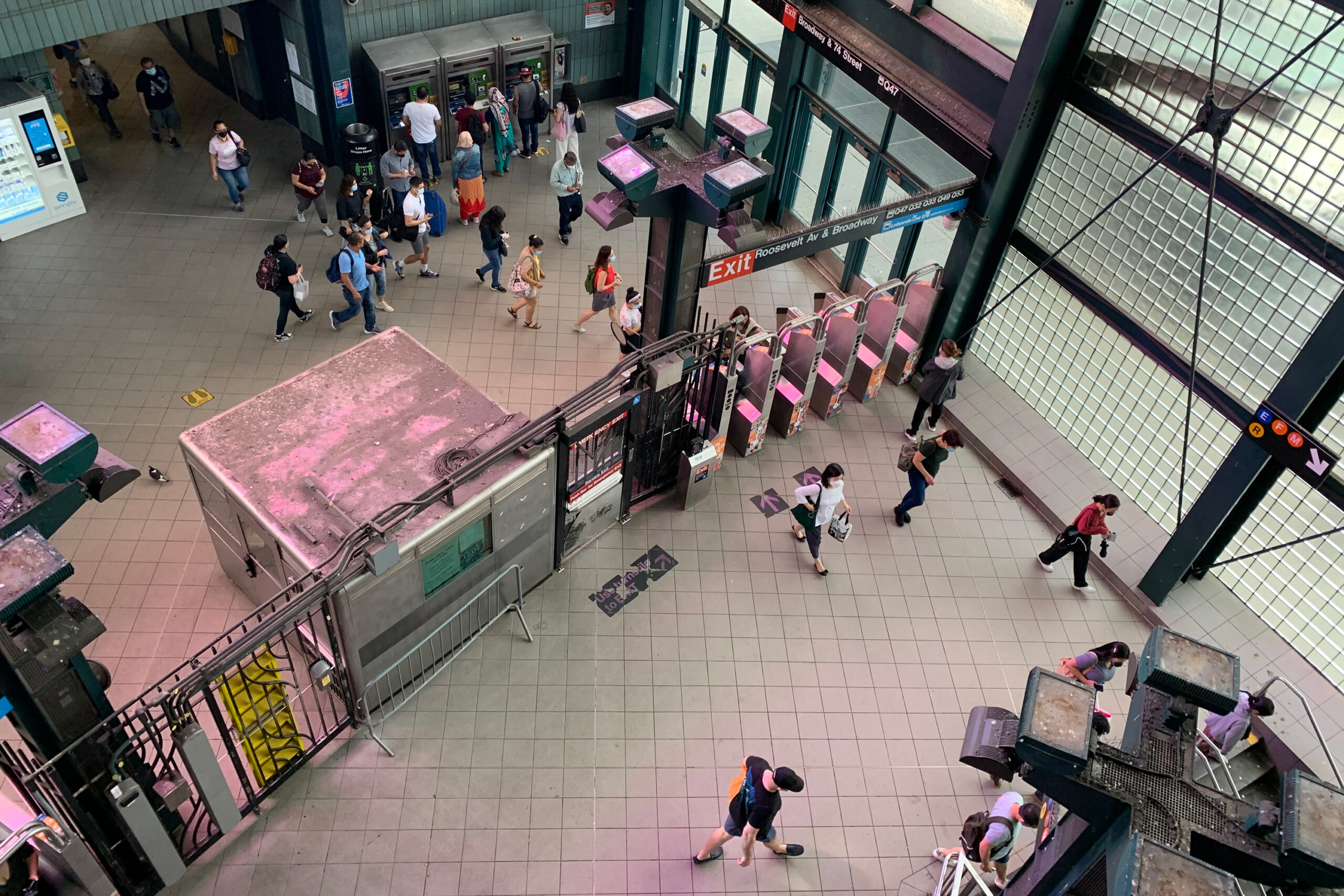 As subway ridership plunged during a pandemic-scarred 2020, Queens finally placed two stations among the 10 busiest in the city, according to MTA figures.

The Jackson Heights-Roosevelt Avenue/74th Street complex on the E, F, M, R and No. 7 lines and the 7’s Flushing-Main Street terminal round out the top 10 stations in the annual accounting of station-by-station usage — whose top stations have traditionally been in Manhattan.

“I don’t have a car, I have to get to work,” said home-health aide Laurina Maniram, 27, of Jamaica, who has commuted the entire pandemic through the Jackson Heights hub on her way to Astoria. “I have no other option but the subway and a lot of people [in Queens] kept going to work.”

An analysis by THE CITY of MTA ridership and turnstile numbers shows how the pandemic hit Manhattan’s 151 stations hardest. In 2020, for the first time since at least 2015, less than half of all trips originated in Manhattan.

The trend has continued into 2021, where MTA numbers point to Manhattan stations lagging behind the other boroughs in recovering riders even as the city starts to reopen. Daily systemwide ridership is at about 40% of pre-pandemic levels. But in Manhattan, just 23% of pre-pandemic subway commuters have returned.

In addition, MTA data reveals that subway trips that stay within a single borough outside of those within Manhattan’s central business district actually increased as a share of total trips — from 20% before the pandemic to 25% in May.

“It’s all about work,” said Rigoberto Martinez, 30, a speech-language pathologist who commutes on the No. 7 from Flushing-Main Street to Woodside. “You see the difference when you get on the train — there is a big population that does not stop moving, even during the pandemic.”

The numbers show that, outside of Manhattan, Queens last year had the most stations among the 50 busiest stops in the system.

Only three Queens stations had weekday ridership sink by more than 70% last year — Mets-Willets Point (82%), Howard Beach-JFK Airport (73%) and Aqueduct Racetrack (72%) — whose crowds largely vanished during the worst of the pandemic.

In contrast, ridership fell by more than 70% at 36 Manhattan stations. https://www.datawrapper.de/_/HOpuO/

In Jackson Heights, weekday ridership dropped 56% last year, moving the station from the 15th busiest in the system to the ninth busiest, with 22,913 riders. It bumped the sprawling Chambers Street-World Trade Center/Park Place/Cortlandt Street complex in Lower Manhattan, where weekday ridership plunged by 72% to an average of 20,193 riders a day.

“There are times in this station when it almost feels normal,” said Darren Wernick, who told THE CITY his Backwoods clothing store at the Jackson Heights subway complex has lost 20% of its pre-pandemic business, compared to a 40% drop at its outpost in the 42nd Street-Port Authority Bus Terminal station.

Seven stops away from 74th St. on the No. 7 line, Flushing-Main St. was the 10th busiest station in 2020, according to MTA figures.

The figures also show how the pandemic has flattened demand during the traditional rush hours in the subway, a trend that some transit analysts believe could eventually lead the MTA to redistribute subway service throughout the day.

“Ridership patterns have changed and service patterns should change in response,” said Ben Fried of TransitCenter, a nonprofit research and advocacy organization. https://www.datawrapper.de/_/yzppB/

While ridership sank by more than 90% during the peak of the coronavirus crisis in 2020, turnstile data shows that Brooklyn, The Bronx and Queens increased their share of trips in 2020 and so far in 2021.

At Manhattan stations, MTA figures reveal, the opposite is true — especially in areas where the number of office workers has not come close to returning to pre-pandemic numbers.

A Partnership for New York City survey this month reported that, as of late May, 12% of Manhattan office employees have returned to offices, a figure expected to jump to 62% by the end of September.

Data shows that stations in Manhattan are accounting for 45% of systemwide turnstile entries in 2021, down from 56% in 2019. Nowhere is that decrease more evident than 50th Street on the 1 line in Midtown where turnstile entries plummeted 88% from 2019 and 75% from 2020.

The return of ridership is central to the financial fortunes of the MTA. The agency has been operating with billions of dollars in federal relief payments and loans. It’s going through a tricky leadership shuffle, with state lawmakers balking at Gov. Andrew Cuomo’s plan to have Sarah Feinberg, the interim president of New York City Transit, replace Patrick Foye as the MTA’s chair.

“The MTA is still working on borrowed time with its federal rescue money,” Fried said.