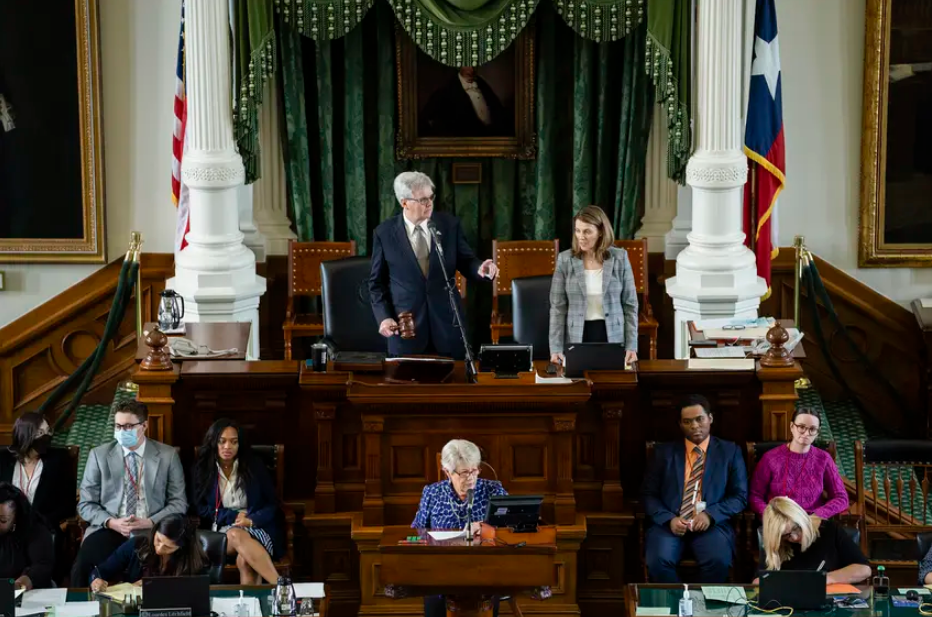 Even though Texas Democrats have effectively sidelined the state House in hopes of blocking a voting restrictions bill, the Senate is nearing the end of its work on Republican priorities for the special legislative session. On Friday, Senators passed a bill that would strip requirements that students learn white supremacy is “morally wrong,” and another that would ban medically induced abortions after about seven weeks into a pregnancy.

Unless enough Democrats return to Texas to again allow the House to pass legislation, the Senate’s passage of bills won’t do much to help the measures become law. But since the special session began last week, the upper chamber has quickly passed twelve bills, including the GOP priority election restrictions bill that spurred House Democrats’ departures.

The Senate has also already passed bills that would make it harder for incarcerated people to get out of jail without cash and restrict student athletes to sports teams that correspond with their sex assigned at birth.

Two pieces of legislation Gov. Greg Abbott put on the special session agenda remain for the Senate, including a bill to reinstate funding to the Texas legislative branch and one that would teach students about preventing child abuse, family and dating violence.

Some of the passedbills are similar to ones the Senate passed in the regular legislative session, but died before that legislative period ended in May.

“We’ve passed these bills, the bail bonds bills and other bills, now the second time,” Lt. Gov. Dan Patrick said before calling recess on the Senate floor Friday. “We will pass on the third time and the fourth time, and the fifth time and the sixth time. We’ll stay until there is a quorum in the other chamber.”

When more than 51 House Democrats left the state Monday, they left the House without a quorum — ​​​​the minimum number of lawmakers that must be present in order to conduct business, which in the House is 100 lawmakers. They’ve vowed to stay out of the state and stall House proceedings until the end of the special session on August 6.

In an interview with Texas Standard earlier this week, Abbott said he will call “special session after special session” until his priority legislation items pass.

“We, being the Republicans, are in no mood for compromise,” Abbott said. “It’s time for people to get back to work and vote for the issues that are on the agenda.”

The previous bill also lists documents, figures and events that must be included in the social studies curriculum. But SB 3, authored by state Sen. Bryan Hughes, strips out most mentions of women and people of color in that section. That includes more than two dozen requirements that include Native American history, work by civil rights activists Cesar Chavez and Dolores Huerta, historical documents related to the Chicano movement and women’s suffrage, and writings by Martin Luther King Jr., Susan B. Anthony and Frederick Douglass.

SB 3 also expands the restrictions on how current events and America’s history of racism can be taught in schools from social studies teachers to all teachers.

On the floor, Hughes, a Mineola Republican, said that the bill’s goal is to lay out “broad concepts,” not dictate curriculum.

Senators’ debate on the chamber floor echoed arguments over the regular session bill that goes into effect Sept. 1. Hughes said it combats the “pernicious, wrong, harmful” effects of critical race theory — an academic framework used to examine structural causes of racial inequity that isn’t taught in Texas public schools. Democrats argued the legislation is unnecessary, inhibits teachers’ work and hinders important discussions about racism in history and the present day.

Sen. Juan Hinojosa, a McAllen Democrat, asked whether the legislation is needed at all, explaining he has “never heard a complaint” from any teacher, parent or constituent about “critical race theory being taught in the schools.”

Hughes said, “When a fire starts in the kitchen, we don’t wait for it to spread to the living room and bathroom, but we start to put it out.”

“I don’t see a fire in the kitchen,” Hinojosa shot back.

The Senate’s passage of the bill came a day after teachers, students and education policy experts overwhelmingly opposed the legislation, citing the lack of teacher input in its creation and what they saw as efforts to curtail necessary discussions of racism in the classroom.

“Why are politicians ignoring professional educators?” said Daniel Santos, executive vice president of the Houston Federation of Teachers and 15-year history teacher in Houston. “Why is our curriculum being manipulated by non-historians?”

When asked by Sen. Judith Zaffirini, a Laredo Democrat, whether he had involved educators in the process, Hughes said that state board of education members were involved and added, “I don’t know all the groups that were involved.”

On Friday, the Senate also passed Senate Bill 4, which would ban medically induced abortions after about seven weeks of pregnancy. The 19-3 vote on that bill came just two months after Texas passed one of the nation’s most restrictive abortion laws.

It was met with critism from abortion rights organizations and abortion providers, who feel that the bill will further elimate options available to those seeking abortion procedures across the state.

“This is just an example of how members of the Texas legislature are ignoring science, ignoring doctors and attempting to take us back and curtail our rights to accessing abortion,” said Drucilla Tigner, who serves as reproductive rights policy and advocacy strategist for the ACLU of Texas.

Right now, getting a prescription for a medically induced abortion requires an in-person doctor’s visit because current Texas law defers to FDA rules. The FDA is considering allowing such a prescription to be obtained through online delivery services. So Republicans want a state law requiring an in-person consultation for such drugs in case the FDA changes its rules.

“If the federal government lessens its authority to open it up for pharmaceutical companies to give drugs to the patient, we don’t want that to be the case in Texas,” said Sen. Eddie Lucio Jr., D-Brownsville, who authored the bill. “I hope we can keep it from happening here.”

Sen. John Whitmire, D-Houston, said the bill, in addition to the recent restriction on abortions after a fetal heartbeat is detected, could lead individuals to resort to “back alley abortions.”

“It’s very hard to prevent somebody from doing something to their body,” Whitmire said. “If they’re desperate, if they’ve been raped, they’re a victim of incest. Y’all are not talking like you’re dealing with the real-life problems.”

Lucio fired back, echoing claims made by other Republican senators during the hearing that medication abortions are unsafe. Medical and legal experts have disputed that notion.

“If these bills are mailed, then they’ll be an unhealthy, an unsafe situation for women seeking an abortion,” he said.

During Friday’s floor debate, other lawmakers made claims disputed by abortion advocates and legal experts that medically induced abortions could lead to human traffickers or abusive partners using these services.

Medicated abortions have become the most common method to terminate a pregnancy in Texas, comprising more than 50 percent of abortion procdures since 2020, according to data from the Texas Health and Human Services.

This article was originally posted on Texas Senate advances bills limiting education about race, access to abortion-inducing medications. The House is still sidelined.