Please ensure Javascript is enabled for purposes of website accessibility The pandemic upended his senior year in Chicago. It also taught him to let go. - Mid Year Media Review
Skip to content 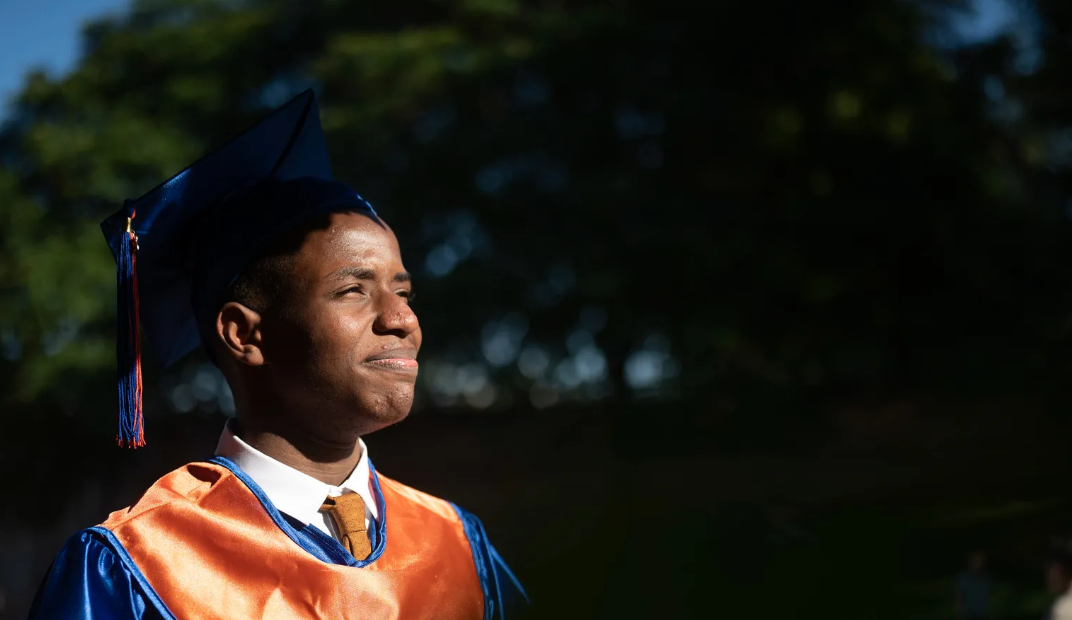 During the past 15 months, Elijah Warren worked on two documentary films, joined a virtual book club with President Barack Obama, and launched a streetwear brand.

As for the thousands of other students across the city graduating this month, the coronavirus upheaval upended the final stretch of Warren’s high school career — and led him to rethink what comes afterward.

His introduction to high school had been challenging: a teen from the Far South Side at the city’s ultra-selective Whitney Young Magnet, one of the country’s best high schools. But the pandemic had tested him like never before — with the isolation of remote learning, the uncertainties of virtual college applications, a tough decision to quit his school football team, all against the drumbeat of COVID losses and racial unrest.

For this aspiring documentarian, the year also imparted self-knowledge and a new confidence. For Elijah’s generation of new graduates, the pandemic brought injustice to the fore and, by banishing them to cramped bedrooms and behind computer screens, taught them to reach out and connect.

As Elijah told Obama during the virtual book discussion last winter, “Trials and tribulations only endure for a season and encourage us to take in the lessons we learn during difficult moments.”

More than 25,000 seniors started this unprecedented school year in the district, though a count of how many finished won’t be available for some weeks.

A season of setbacks

Elijah had dreamed of attending Whitney Young for years, but at first, did not make the cut. Determined, he wrote the school principal a letter arguing for a chance.

Still Elijah spent much of his first two years at the school wondering if he belonged there, his hour-long commute magnifying the sense he didn’t quite fit in. He questioned if he could keep up amid a competitive atmosphere where freshmen and sophomores already seemed to be angling to get into the best colleges some day.

By his junior year, that started to change. He led class discussions and took the helm of group projects. He joined a mayoral commission to get input from teens and young adults. Through a collaboration between the nonprofit After School Matters and NBA Cares, he got to work on a documentary about his Auburn Gresham neighborhood.

He wanted to push back against portrayals of his community that reduced it to a bastion of crime and economic hardship. He pitched the documentary idea to a group of NBA players. He tracked down Black-run nonprofits and businesses making the neighborhood safer and more vibrant to feature in the film. And he narrated the documentary, “Sharing Our Truth,” in his soft but authoritative voice.

Then, the coronavirus abruptly closed schools in March.

Elijah’s AP psychology teacher, Bridget Nelson, saw him grapple with the sudden shrinking of a high school universe he had worked hard to expand.

“He gets a lot of his energy from being around others, and that initial transition was really shocking to him,” she said. “In remote learning, he went silent.”

Nelson had to coax Elijah to start logging on — and participating again.

Soon came another setback: Elijah’s church nominated him for a Posse Foundation program for promising college-goers from underrepresented communities, which might have granted him early admission and a free ride to his dream school, the University of Wisconsin at Madison. Passionate about combating climate change, Elijah had known since his freshman year that he wanted to study environmental science, and Madison had a good program. But he did not get in.

Elijah returned to school last fall bent on rebounding from those setbacks Remote learning meant he wouldn’t have to commute. His school’s air of competition did not bear down on him as much. Social distractions were gone.

“This is perfect,” he told himself. “Now I can really focus on my studies.”

He set out to ace his senior year — and take on even more responsibilities. He threw himself into applying for college, still eyeing the University of Wisconsin but casting a wider net. In his college essay, he showed how the past year had made it tough for even the most oblivious to avert their gaze from racism. But he also offered an optimistic vision of people of different races and backgrounds learning to coexist in America’s “salad bowl.”

With a group of friends, he started a fashion business, with a slick website promoting hoodies and T-shirts and the catchy motto “The Future Is In Sight.” He worked as a server at a country club, sometimes logging as many as 25 hours a week. He kept a virtual calendar and used an app to make to-do lists, feeling more organized and productive than ever.

The crisis opened up surprising opportunities.

Elijah got to work on a second documentary when Reginald Grigsby’s law class at Whitney Young set out to highlight the stories of wrongfully imprisoned people. After other students struck out, Elijah stepped in and persuaded some exonerees to participate in on-camera interviews.

Elijah’s mom, Melanie Warren, was heartened to see her son and his fellow students embrace a brand of activism that she believes is more unapologetic, strategic, and focused on the big picture than that of generations past.

“At 18, I wasn’t thinking about how to make the world better,” she said, “and Elijah thinks a lot about that.”

Last winter, Elijah was also on a Zoom call in which Obama surprised a group of students, announcing he was giving a free digital copy of his memoir “A Promised Land” to all high schoolers in the district.

A couple of months later, after plowing through the 760-page book and preparing obsessively, Elijah was back in a virtual book discussion with Obama.

“The pandemic has separated me from a lot of close people I depended on, such as friends and mentors,” Elijah opened up. “Losing these relationships has affected my mental health.”

By that point in the year, social isolation was wearing Elijah down. Some mornings, he tried to work up enthusiasm for another virtual school day and ended up thinking, “I really can’t. It’s not in me today.”

“Can you give me a moment to figure out my life?” he would appeal to his teachers.

He reassured himself that schools would eventually reopen for in-person learning.

Elijah also felt anxious about getting into college. He had submitted applications to 10 schools, and braced for rejection. Would the University of Wisconsin prove out of reach in the end?

Then, as spring approached, burnout set in. Friends questioned why he kept going with the fashion business, even as his partners dropped out: What did streetwear have to do with environmental science or foreign policy, the college majors he now weighed?

He dismissed that criticism, telling himself, “I am all over the place, but I’m making it work.”

Melanie Warren worried her son didn’t fully acknowledge how the stresses of a pandemic year — the tally of coronavirus deaths on the daily news, the risk in once pedestrian tasks like grocery shopping — could sap his energy.

“Since he was a kid, Elijah has always had big dreams and big goals,” she said. “I encourage him to take it one step at a time.”

It all came to a head when Whitney Young’s football team started practicing again in the spring. Elijah, a linebacker, was thrilled to rediscover the camaraderie of the field. Still, with nightly practice during a compressed season and his long commute, he would get home exhausted at 8 p.m. and tackle assignments for the next day.

He quit the team.

Leaving the “brotherhood” was wrenching. But the pandemic had taught Elijan it was OK to shift gears: “I can’t do it all, and sometimes I have to let things go.”

This past spring, he excitedly filled out a district survey saying he would return to in-person instruction in mid-April. But seeing many of his friends opt out and considering how little was left of the school year, he — like about two-thirds of Chicago high school students — decided to continue learning from home.

Elijah also rethought college. He was accepted at Madison, but decided to begin his studies at Kennedy-King Community College on the South Side instead, with a plan to transfer after two years. Some family members questioned whether he was stalling his next big test: four-year college. But Elijah says he wants to tackle that test with a clear career path — not with a slew of competing passions he needs to sort through.

Inspired by an aunt who told him about the hot Chicago housing market, he plans to start studying for the Realtor exam, bringing his energy and charisma to a real estate foray.

“I am taking a detour, but I am motivated and determined, and I’m giving myself a chance to get it right,” he said.

On Wednesday, Elijah waited in a dimly lit tunnel at Soldier Field as he and fellow Whitney Young seniors prepared to walk out on the sun-drenched arena for their graduation ceremony. The blue robe-clad group formed a chattering line that swelled and thinned with the excitement of long-awaited reunions. Standing in the tunnel’s gloom, Elijah was struck by the strangeness of seeing friends for the first time in 15 months — at the very moment their paths were poised to diverge.

“You made it through the pandemic,” Principal Joyce Kenner told the students on the field later. “You can make it through anything.”

This article was originally posted on The pandemic upended his senior year in Chicago. It also taught him to let go.