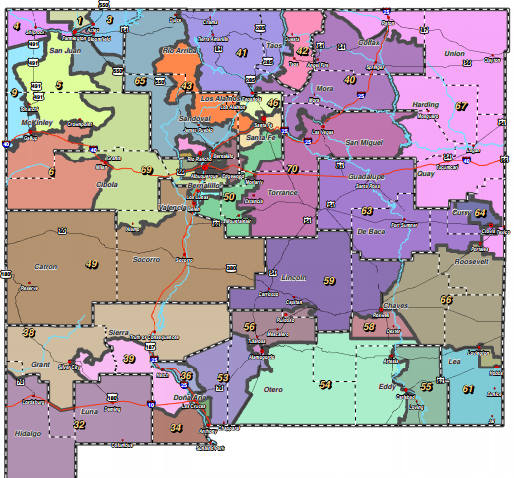 The legislative challenge to choose a process for redistricting still hasn’t been settled.

Lawmakers have just one week to get the job done.

On Friday, members of the House Judiciary Committee voted to advance two bills that each would create an independent commission to redraw election district boundaries for congressional and legislative seats. That means the competing measures both will move to the House of Representatives for consideration.

The committee adopted some amendments for House Bill 211 and Senate Bill 15 that made them more closely aligned.

Chief among them: The Senate bill does not include a provision prohibiting the committee from considering the current political makeup of existing districts as it drafts a new plan.

The issue of whether any group of planners can create a fair plan that doesn’t favor one political party’s power over another has come up several times in talks about redistricting legislation. The most recent was when House Speaker Brian Egolf said during a panel talk that allowing an independent commission to redraw districts could weaken Democrats’ advantage in the Legislature, “and the [Democratic] agenda goes out the window.”

The issue dominated the latter part of Friday’s discussion.

“Partisan data is inherent in creating districts to give communities a reasonable chance of choosing a candidate of their choice,” Egolf, a Santa Fe Democrat, argued Friday.

He has signed on as a co-sponsor of SB 15, along with Sen. Daniel Ivey-Soto, D-Albuquerque.

Rep. Natalie Figueroa, D-Albuquerque, a sponsor of HB 211, told the committee “many constituents … see it as a break of faith that we would draw districts” with political party power in mind. She said that’s one reason HB 211 is a stronger bill than SB 15.

Each bill would create a seven-member commission chosen by leaders of both parties in the House and Senate, as well as the State Ethics Commission.

The commission would be required to hold a dozen open meetings to gather public input and formulate three plans for each of the following political seats: the U.S. Congress, the Public Education Commission, the state House and the state Senate.

The commission would then submit those plans to the Legislature to consider during a special session later this year.

The stakes remain high because redistricting can determine who holds political power in a particular region of the state.

Critics of SB 15 say it does not provide enough guidelines to ensure the Legislature, after receiving the options, makes the process of choosing a plan open to the public.

Ivey-Soto contested that notion, saying the bill makes clear the Legislature will consider the issue as it would any other piece of legislation.

“A redistricting proposal is a bill subject to the same rules as any other bill in the Legislature,” he said. “Committee meetings will be held in public. Debate is in public and the vote is in public when it goes to the floor.”

HB 211 would require the Legislature to accept one of the commission’s plans. Ivey-Soto has said that would violate the state constitution.

SB 15 gives the Legislature much more freedom when it comes to considering proposals. Under the measure, lawmakers could decide to choose none of them.

“We could reject them all, if we wish,” Ivey-Soto said.

“There does appear to be a distinction forming up between those legislators who support putting into statute the recommendations of the New Mexico Redistricting Task Force and those who don’t,” she wrote.

Redistricting, designed to ensure the number of people in each voting district remain fairly equal, is required in every state once a decade, based on national census data. But the coronavirus pandemic is causing delays in the release of 2020 census numbers, so states won’t get that information to start the redistricting process until late September.

New Mexico has had a rocky experience with redistricting since at least the 1960s, when a tradition of lawsuits challenging plans began.

Voting districts in New Mexico were last drawn in 2012 by a state District Court after then-Gov. Susana Martinez, a Republican, vetoed a plan drafted by a Legislature with a majority of Democrats following the 2010 census.

Some lawmakers raised concerns Friday that more lawsuits could be filed if people are dissatisfied with this year’s process. Ivey-Soto said there’s not much that can be done about that.

“We can’t stop people from filing a lawsuit to try to get a different set of maps,” he said.